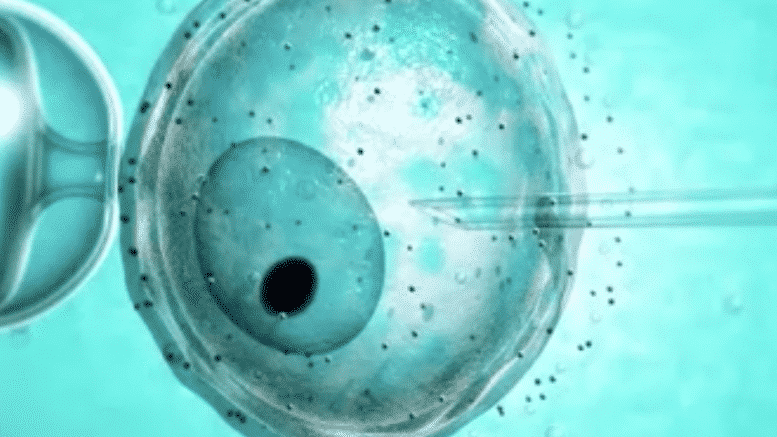 Please Share This Story!
PDF 📄
The procedure was done in Mexico because is illegal in the U.S. However, the genetic modification genie has been let out of the bottle. Don’t think for a single minute that Eugenics is not alive and well on planet earth! ⁃ TN Editor

It’s a boy! A five-month-old boy is the first baby to be born using a new technique that incorporates DNA from three people, New Scientist can reveal. “This is great news and a huge deal,” says Dusko Ilic at King’s College London, who wasn’t involved in the work. “It’s revolutionary.”

The controversial technique, which allows parents with rare genetic mutations to have healthy babies, has only been legally approved in the UK. But the birth of the child, whose Jordanian parents were treated by a US-based team in Mexico, should fast-forward progress around the world, say embryologists.

The boy’s mother carries genes for Leigh syndrome, a fatal disorder that affects the developing nervous system. Genes for the disease reside in DNA in the mitochondria, which provide energy for our cells and carry just 37 genes that are passed down to us from our mothers. This is separate from the majority of our DNA, which is housed in each cell’s nucleus.

Around a quarter of her mitochondria have the disease-causing mutation. While she is healthy, Leigh syndrome was responsible for the deaths of her first two children. The couple sought out the help of John Zhang and his team at theNew Hope Fertility Center in New York City.

Zhang has been working on a way to avoid mitochondrial disease using a so-called “three-parent” technique. In theory, there are a few ways of doing this. The method approved in the UK is called pronuclear transfer and involves fertilising both the mother’s egg and a donor egg with the father’s sperm. Before the fertilised eggs start dividing into early-stage embryos, each nucleus is removed. The nucleus from the donor’s fertilised egg is discarded and replaced by that from the mother’s fertilised egg.

But this technique wasn’t appropriate for the couple – as Muslims, they were opposed to the destruction of two embryos. So Zhang took a different approach, called spindle nuclear transfer. He removed the nucleus from one of the mother’s eggs and inserted it into a donor egg that had had its own nucleus removed. The resulting egg – with nuclear DNA from the mother and mitochondrial DNA from a donor – was then fertilised with the father’s sperm.