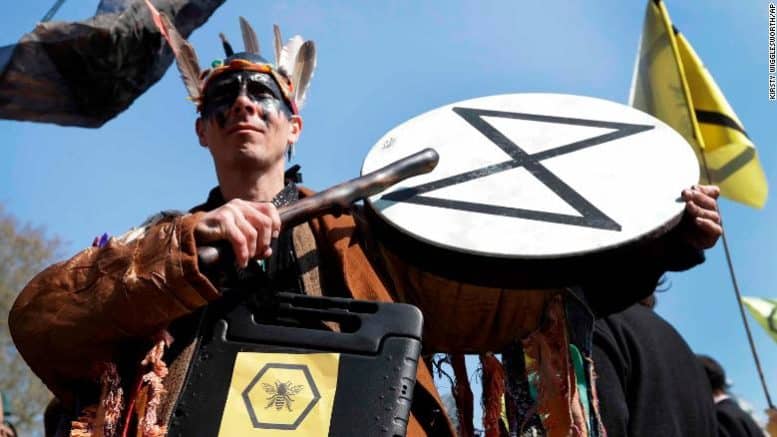 Please Share This Story!
PDF 📄
Ronald Reagan said, “Freedom is never more than one generation away from extinction.” These delusional climate protestors are proving the point by demanding the policies that will lead to their own extinction. ⁃ TN Editor

Thousands of people took to the streets of central London on Monday, blockading some of the UK capital’s busiest roads and bridges, and gluing themselves to street furniture, to raise the alarm over a mounting climate crisis.

On Monday morning, a group of demonstrators with trees, plants and solar panels in tow barricaded Waterloo Bridge, one of five locations being targeted by environmental campaigners in the city as part of the protest, which is expected to continue for at least a week.

The demonstrations are part of a global campaign, orchestrated by British climate organization Extinction Rebellion, which includes rallies in at least 80 cities across more than 33 countries, demanding governments “take decisive action on the climate and ecological emergency.”

he group, which is supported by a slew of academics, scientists and celebrities, including the former Archbishop of Canterbury Rowan Williams and American actor Willem Dafoe, claims that more than 3,000 people will take part in protests in the city.

Extinction Rebellion, which launched late last year with climate protests that shut down five London bridges, made headlines earlier this month when members of the group disrupted a Brexit debate in Parliament with a nude demonstration.

Protesters were expected to use tactics including gluing or locking themselves to gates, benches, turnstiles and other street furniture to bring intersections and streets to a standstill on Monday.

Photos and videos shared on social media showed some protesters outside London’s Shell Centre near Waterloo Bridge on Monday. While some demonstrators glued themselves to the revolving front door, others scrawled Extinction Rebellion’s hourglass symbol in graffiti and smeared black paint on the exterior of the building. The protesters also smashed a glass door.

A Shell spokesman told CNN: “We respect the right of everyone to express their point of view, we ask only that they do so with their safety and the safety of others in mind.”

London’s Metropolitan Police said in a statement that policing plans were in place to support public order during Extinction Rebellion demonstrations over the coming weeks, and advised those traveling in the capital to allow for extra journey time.

Among the group’s demands is that governments reduce carbon emissions to zero by 2025 and create citizens’ assemblies to devise an emergency plan of action on climate and ecological justice.

‘Force the government to tell the truth’

Anna Burton, from Lancashire in northwest England, said she came to Marble Arch on the corner of London’s Hyde Park to call on big businesses to go carbon neutral and demand a better ecological future for her children.

“I’ve come to force the government to tell the truth about climate change, the extent of the damage … it’s about priorities: fossil fuel industries, the banks, the businesses, everybody — it’s not in everyone’s interest to go carbon neutral,” Burton told CNN.

“I’m here for my children, I’ve lived my life but I want them to live a normal life, and they might not have a chance to.”

Half a mile away, on Oxford Street, demonstrators had gathered at one of the city’s main thoroughfares for a sit-in.

Some protesters dressed in yellow paper crowns were lying in the street in a “die-in,” their arms linked through tubes. Nearby, others stood atop a pink painted sailboat emblazoned with the message, “Tell the truth,” with a flag bearing the group’s logo.