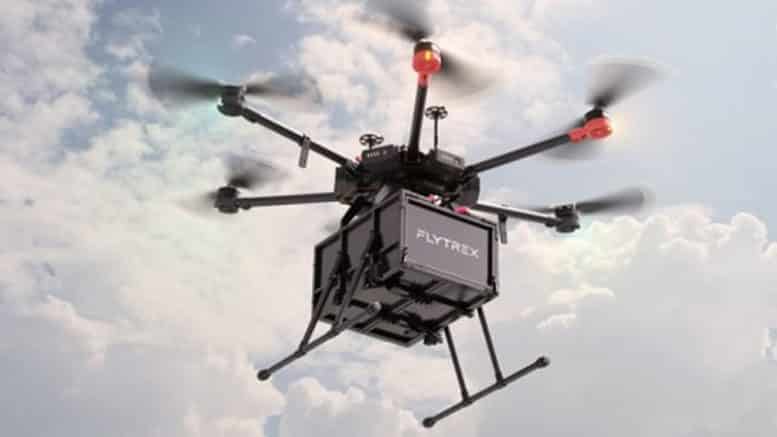 Please Share This Story!
PDF 📄
Technocrats who would gladly replace human delivery drivers with drones are populating the skies with noisy and intrusive drones. Convenience aside, people will consider them a massive nuisance.  ⁃ TN Editor

The team will deliver food via drone in Holly Springs, NC, as part of the FAA’s UAS Integration Pilot Program (IPP) program in partnership with the North Carolina Department of Transportation (NCDOT) and the Town of Holly Springs.

The drones will travel along a single fixed route from a distribution center to an outdoor recreational area over mostly unpopulated areas, though the route does cross a highway. The FAA approved this route. Flytrex drones have been delivering food in Iceland in partnership with a local e-commerce site since 2017.

With this plan, drones are beginning to show similarities to other introductions of autonomous vehicles into supply chains. Repeated fixed routes, or “milk runs,” are quickly becoming a hallmark of early autonomous vehicle applications. Walmart, for one, is moving groceries between a Walmart grocery pickup location and a Walmart Neighborhood Market, in Bentonville, AR, via autonomous van.

Fixed routes substantially decrease the variables the vehicle may encounter, and in the case of the North Carolina flight plan, minimizes the number of people the drone will fly over. Another player looking to deliver food via drone is Uber Eats.