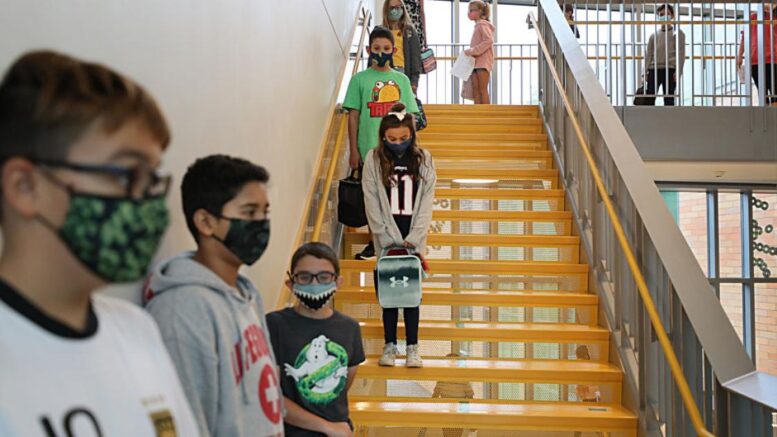 Please Share This Story!
PDF 📄
Former FDA Commissioner, Scott Gottlieb, admits that the 6 foot figure for social distancing was completely arbitrary and had no science behind it whatsoever. This is why schools were shut down since students could not be kept 6 feet apart. All for nothing. If parents were not angry before, this will set their hair on fire. ⁃ TN Editor

Scott Gottlieb, the former commissioner of the Food and Drug Administration (FDA), admitted during an interview on Face the Nation that the six foot social distancing rule recommended by public health officials for months on end was actually “arbitrary in and of itself,” and he noted that “nobody knows where it came from.”

Speaking with Face the Nation’s Margaret Brennan, Gottlieb discussed the rules and risks early in the pandemic, explaining that the Trump administration shifted its focus to the impact lockdowns and rules would have on the economy and children.

“My view is that they were sold on the idea that you weren’t going to be able to really affect the spread and that anything you did was just going to have so many repercussions in terms of impact on children who might not be in school. Impact on the economy, that the costs were worse than the disease,” he said, explaining that schools were a “perfect example of the lack of effective policymaking.”

Students waking in the hallway at Tibbals Elementary School place their arms in front as a reminder to socially distance in Murphy, Texas, December 3, 2020. (AP Photo/LM Otero)

“So the single reason why most schools remained shut was because the CDC (Centers for Disease Control and Prevention) was telling them they had to keep kids six feet apart,” he said. “If- if CDC has said you can only- you have to keep kids three feet apart, then a lot of schools would have been able open.”

“And in fact, when the Biden administration wanted to open schools in the spring, this past spring, they got the CDC to change that guidance from six feet to three feet,” Gottlieb continued, admitting the original guidance was “arbitrary” and had unknown origins.

“The six feet was arbitrary in and of itself, nobody knows where it came from,” he said. “The initial recommendation that the CDC brought to the White House and I talk about this was 10 feet, and a political appointee in the White House said we can’t recommend 10 feet.”

“Nobody can measure 10 feet. It’s inoperable. Society will shut down. So the compromise was around six feet. Now imagine if that detail had leaked out. Everyone would have said this is the White House politically interfering with the CDC’s judgment,” he continued:

The CDC said 10 feet, it should be 10 feet, but 10 feet was no more right than six feet and ultimately became three feet. But when it became three feet, the basis for the CDC’s decision to ultimately revise it from six to three feet was a study that they had conducted the prior fall. So they changed it in the spring. They had done a study in the fall where they showed that if you have two masked individuals, two people wearing masks, the risk of transmission is reduced 70% with masks if you’re three feet apart. So they said on the basis of that, we can now make a judgment that three feet is an appropriate distance. Which begs the question if they had that study result in the fall? Why didn’t they change the advice in the fall? Why did they wait until the spring?

6 foot distancing is propaganda. Remember these lyrics ‘Signs’? https://www.songfacts.com/lyrics/five-man-electrical-band/signs Though people complain about the signs, and evil they disobey, the propaganda war has reached through into religion so that men cannot discern what is right. People then say God I don’t need you even though they see the signs all around them which they hate that something is not right. All God calls you to do is to recognize that we are no good sinners and we need Him. ‘Christ died for our sins according to the scriptures and that he was buried and that he rose again the… Read more »

To prevent infection you need to stay 25 feet apart. More than 10.
Not sure the recommendation was truly arbitrary. Those cloth face masks worn everywhere can be found as ceremonial masks on sites like Luciferean Apotheca. Another part of a Satanic ritual is staying 6 feet apart at all times.
Bill Gates describes himself as a wizard. Not a joke.

Well if he’s a wizard maybe we’ll all get lucky and one of his criminal buddies will stick that wand where the sun don’t shine. CREEP.

It’s all coming out, statement by statement, fact by fact. I suppose the predators believe that after 2 years of purposeful hell the Normies have been indoctrinated enough to remain blind to these criminal admissions and the obvious orchestration of lies by the UN/WEF/CCP. All are made true by the continuing admissions of such people as Gottlieb. We can extrapolate from his comments that the covid lie was definitely planned and executed from beyond the CDC, et al and White House in order to lock every country in step with the ‘new normal’ totalitarian program. The State politicos don’t know… Read more »

[…] White House politically interfering with the CDC’s judgment,” he continued: read the rest at Technocracy, thanks to Mark Crispin Miller for passing this […]