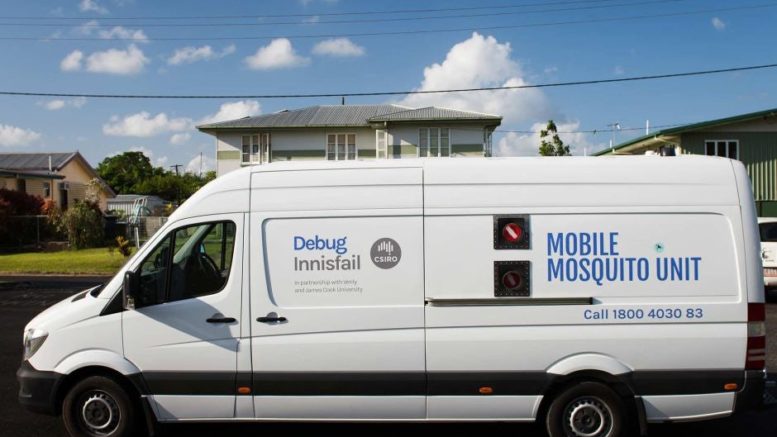 Please Share This Story!
PDF 📄
Nobody likes mosquitoes that bite and potentially carry disease, but the thought of extinguishing the species entirely is causing a lot of scientific concern. Conceptually, if interfering with the reproduction cycle works with the elimination mosquitoes, it could work with other species as well. ⁃ TN Editor

A white high-top Mercedes van winds its way through the suburban sprawl and strip malls as a swarm of male Aedes aegypti mosquitoes shoot out of a black plastic tube on the passenger-side window. These pests are tiny and, with a wingspan of just a few millimeters, all but invisible.

“You hear that little beating sound?” says Kathleen Parkes, a spokesperson for Verily Life Sciences, a unit of Alphabet. She’s trailing the van in her car, the windows down. “Like a duh-duh-duh? That’s the release of the mosquitoes.”

Jacob Crawford, a Verily senior scientist riding with Parkes, begins describing a mosquito-control technique with dazzling potential. These particular vermin, he explains, were bred in the ultra-high-tech surroundings of Verily’s automated mosquito rearing system, 200 miles away in South San Francisco. They were infected with Wolbachia, a common bacterium. When those 80,000 lab-bred Wolbachia-infected, male mosquitoes mate with their counterpart females in the wild, the result is stealth annihilation: the offspring never hatch.

Better make that 79,999. “One just hit the windshield,” says Crawford.

Google’s Parent Has a Plan to Eliminate Mosquitoes Worldwide

Mosquito-borne disease eradication is serious stuff for Alphabet, though it is just one of many of the company’s forays into health care and life sciences. Through Verily and other branches of the company, Alphabet is investigating smart contact lenses, artificial intelligence applications for health care, and the molecular mechanisms of aging. Just this month, Google hired Geisinger Health Chief Executive Officer David Feinberg to oversee its many health-care initiatives.

Verily guards its technology closely. But it stands to reason that if it succeeds in making mosquito control easy and cheap enough, it could have a lucrative offering on its hands: Many governments and businesses around the globe might be glad to pay for a solution to their mosquito problems.

In the arid climate of California’s Central Valley, A. aegypti are detested for their vicious bite. But there, at least, they don’t typically transmit disease. Other places aren’t so lucky. The mosquito species is among the world’s deadliest, spreading diseases such as dengue fever and chikungunya in the tropics and subtropics. The diseases its bite carries kill tens of thousands of people every year and infect millions more. Releasing Wolbachia-infected mosquitoes into the wild may eventually wipe out entire populations of deadly mosquitoes and the diseases they carry.

At least that’s the plan if the field tests pan out in California. Every morning during mosquito season—which runs from April to November—the van, emblazoned with “Debug Fresno,” cruises through leafy housing tracks full of multistory homes. At predetermined locations, an algorithm automatically releases carefully calculated numbers of mosquitoes, counting each individual insect with the help of a laser as it exits the van.

As the efforts to wipe out mosquito-borne diseases have ramped up, a few different approaches to the problem have emerged. Bill Gates alone has pledged more than $1 billion for technologies that may help wipe out malaria, including controversial efforts to genetically modify mosquitoes. Verily’s approach relies on a variation of a very old strategy known as sterile insect technique, in which a population is gradually killed off by interfering with the ability to reproduce.

It’s unclear what would happen if the world’s disease-causing mosquitoes were done away with. The ecological role that mosquitoes play hasn’t been thoroughly studied, though some scientists suggest we might be just fine without them. But it’s clear that A. aegypti has no business in Fresno County. Native to warmer, wetter climes, no one knows where they came from when they first showed up in 2013. All that’s certain is that they have spread extremely rapidly.

“After we detected it, we did a massive and extensive effort to prevent the mosquito from establishing and eliminate it,” says Jodi Holeman, the scientific services director for Fresno County’s Consolidated Mosquito Abatement District. “We were not successful, in any way, shape, or form.”

The county went from having not much of a mosquito problem at all to having one that made residents avoid their backyards and porches. Unlike most mosquitoes, A. aegypti lives and breeds in places inhabited by people, laying its eggs in, say, the few droplets of stagnant water at the bottom of a wine glass left on a balcony, then hiding under beds and in closets, biting legs and ankles. This makes it much harder to fight. Going door-to-door and begging residents to dump out standing water wasn’t cutting it, so in 2016, Fresno teamed up with a scientist named Stephen Dobson and his company, MosquitoMate.