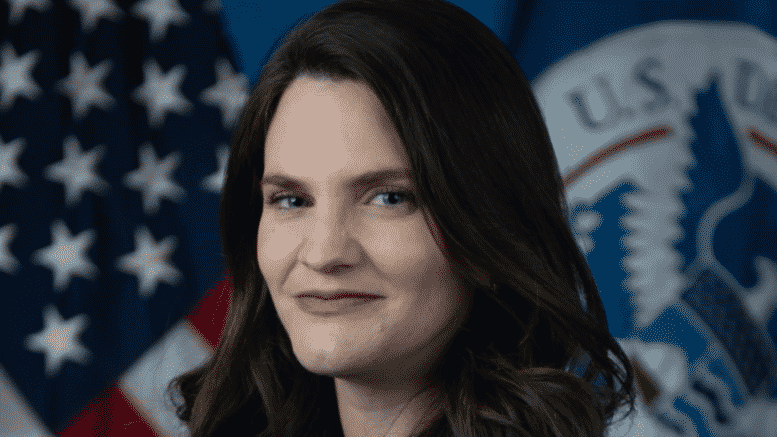 Official government portrait of Nina Jankowicz, appointed to serve as Executive Director of the new “Disinformation Board” to be housed within the U.S. Department of Homeland Security (posted by Jankowicz to Twitter)

Posted By: Glenn Greenwald via Substack May 5, 2022

Please Share This Story!
PDF 📄
The DHS is gaslighting the nation when it says it will protect us from disinformation: the polar opposite is true. Biden has orchestrated the entire Executive Branch of government to intentionally lie and deceive in order to create a monopoly of information based on their own contrived narrative.  Who will supply DHS with “truth”? The myriad disingenuous “fact checkers” and left-wing organizations like the Southern Poverty Law Center. ⁃ TN Editor

The power to decree what is “disinformation” now determines what can and cannot be discussed on the internet. It is now in the hands of trained disinformation agents of the U.S. Security State.

The most egregious and blatant official U.S. disinformation campaign in years took place three weeks before the 2020 presidential election. That was when dozens of former intelligence officials purported, in an open letter, to believe that authentic emails regarding Joe Biden’s activities in China and Ukraine, reported by The New York Post, were “Russian disinformation.” That quasi-official proclamation enabled liberal corporate media outlets to uncritically mock and then ignore those emails as Kremlin-created fakes, and it pressured Big Tech platforms such as Facebook and Twitter to censor the reporting at exactly the time Americans were preparing to decide who would be the next U.S. president.

The letter from these former intelligence officials was orchestrated by trained career liars — disinformation agents — such as former CIA Director John Brennan and former Director of National Intelligence James Clapper. Yet that letter was nonetheless crucial to discredit and ultimately suppress the New York Post‘s incriminating reporting on Biden. It provided a quasi-official imprimatur — something that could be depicted as an authoritative decree — that these authentic emails were, in fact, fraudulent.

After all, if all of these noble and heroic intelligence operatives who spent their lives studying Russian disinformation were insisting that the Biden emails had all of the “hallmarks” of Kremlin treachery, who possessed the credibility to dispute their expert assessment? This clip from the media leader in spreading this CIA pre-election lie — CNN — features their national security analyst James Clapper, and it illustrates how vital this pretense of officialdom was in their deceitful disinformation campaign:

This same strategic motive — to vest accusations of “disinformation” with the veneer of expertise — is what has fostered a new, very well-financed industry heralding itself as composed of “anti-disinformation” scholars. Knowing that Americans are inculcated from childhood to believe that censorship is nefarious — that it is the hallmark of tyranny — those who wish to censor need to find some ennobling rationale to justify it and disguise what it is.

They have thus created a litany of neutral-sounding groups with benign names — The Atlantic Council, the Institute for Strategic Dialogue, various “fact-checking” outfits controlled by corporate media outlets — that claim to employ “anti-disinformation experts” to identify and combat fake news. Just as media corporations re-branded their partisan pundits as “fact-checkers” — to masquerade their opinions as elevated, apolitical authoritative, decrees of expertise — the term “disinformation expert” is designed to disguise ideological views on behalf of state and corporate power centers as Official Truth.

Yet when one subjects these groups to even minimal investigative scrutiny, one finds that they are anything but apolitical and neutral. They are often funded by the same small handful of liberal billionaires (such as George Soros and Pierre Omidyar), actual security state agencies of the U.S., the UK or the EU, and/or Big Tech monopolies such as Google and Facebook.

Indeed, the concept of “anti-disinformation expert” is itself completely fraudulent. This is not a real expertise but rather a concocted title bestowed on propagandists to make them appear more scholarly and apolitical than they are. But the function of this well-funded industry is the same as the one served by the pre-election letter from “dozens of former intelligence officials”: to discredit dissent and justify its censorship by infusing its condemnation with the pretense of institutional authority. The targeted views are not merely wrong; they have been adjudged by official, credentialed experts to constitute “disinformation.”

This scam is the critical context for understanding why the Biden Administration casually announced last week the creation of what it is calling a “Disinformation Board” inside the Department of Homeland Security (DHS). There is no conceivable circumstance in which a domestic law enforcement agency like DHS should be claiming the power to decree truth and falsity. Operatives in the U.S. Security State are not devoted to combatting disinformation. The opposite is true: they are trained, career liars tasked with concocting and spreading disinformation. As Politico‘s Jack Schafer wrote:

Who among us thinks the government should add to its work list the job of determining what is true and what is disinformation? And who thinks the government is capable of telling the truth? Our government produces lies and disinformation at industrial scale and always has. It overclassifies vital information to block its own citizens from becoming any the wiser. It pays thousands of press aides to play hide the salami with facts….Making the federal government the official custodian of truth would be like Brink’s giving a safe-cracker a job driving an armored car.

The purpose of Homeland Security agents is to propagandize and deceive, not enlighten and inform. The level of historical ignorance and stupidity required to believe that U.S. Security State operatives are earnestly devoted to exposing and decreeing truth — as CNN’s Brian Stelter evidently believes, given that he praised this new government program as “common sense” — is off the charts. As Jameel Jaffer, formerly of the ACLU and now with the Columbia’s Knight First Amendment Institute put it, most troubling is “the fact that the board is housed at DHS, an especially opaque agency that has run roughshod over civil liberties in the past.”

She IS the Dolores Umbridge of The Ministry of Truth, previously known as DHS. She is a very mean, ugly soul. Just look into her eyes. Hers are more like that of a serial killer than a 33-yr-old human female. “NO! Don’t run. I’m your friend!” as she holds the hatchet high. There are no other words for her hateful language and fascist ideas. SHE MUST GO! Bottom line: “Operatives in the U.S. Security State are not devoted to combatting disinformation. The opposite is true: they are trained, career liars tasked with concocting and spreading disinformation. As politico Jack Schafer wrote…” All in.… Read more »

Strange all this commotion about this new agency.
Anyone knows that today disinformation just means ‘anything that they do not like or tolerate’.
So they set up an office to police that. Nothing to do with truth at all.
That is exactly what corrupt people can be expected to do. No surprise.
Obi.