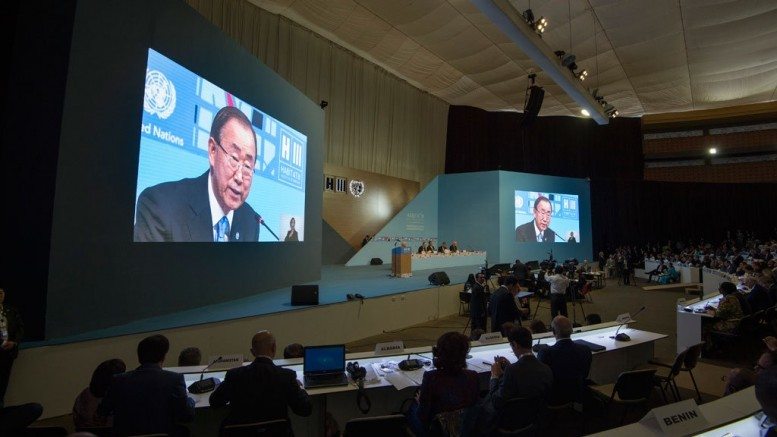 Habitat III will approve the ‘New Urban Agenda’ to transform towns and cities through Sustainable Development. It is appropriate that Habitat III is being held in Quito, Ecuador because it was the first declared UN World Heritage Site back in 1978. ⁃ TN Editor

The long-awaited global meeting, formally known as the UN Conference on Housing and Sustainable Urban Development, takes place every 20 years, and its action-oriented outcome, known as the New Urban Agenda, was formally presented to delegations shortly after the conference got under way.

In his opening opening address, Mr. Ban thanked Ecuador for hosting the gathering, the first ever to be held in the Global South, where many of the biggest urban development problems are manifesting themselves.

Lying almost on the equator at close to 10,000 feet, the Latin American capital was one of the first to be declared a World Heritage Site by the UN Educational, Scientific and Cultural Organization (UNESCO), in the late 1970s.

“It reflects both the challenges of sustainable development and many of the solutions the world will need in the years to come,” said the Secretary-General.

The New Urban Agenda sets new standards moving forward and is designed to re-think how the fast-growing urban population of the world can live more sustainably.

Since the first Habitat conference in 1976, the urban population has grown hugely, and will represent close to 70 per cent of the total population on Earth by 2050, according to UN estimates.

The Agenda demands action at all layers of government, civil society, business and the private sector, to help lift up the wider Sustainable Development Goals (SDGs) geared towards 2030.

Cities are “remarkable engines of growth, centres of diversity and hubs of creativity” that will only get more important, said Mr. Ban.

At the same time, he emphasized that urban areas are expanding rapidly, especially in developing countries, and that expansion is frequently unplanned.

Indeed, approximately a quarter of urban dwellers live in slums or informal settlements. Increasing numbers of poor and vulnerable people live in precarious conditions. Many are isolated from opportunities for decent work and are vulnerable to crime, forced evictions and homelessness.

“The pollution that cities produce and the products they consume have dramatic consequences for the environment,” explained the UN chief adding that the energy cities use is a major contributor to climate change.

“It means more investment in adequate and affordable housing, quality infrastructure and basic services. And it means engaging women and girls in making towns and cities safer and more productive for all […] Cities and towns have an immense role to play in ending poverty and building inclusive societies that promote participation by all,” stated Mr. Ban.

The UN chief stressed that the success of the New Urban Agenda and this once-in-a-generation conference, depend on the collaboration of all countries and stakeholders.

Ecuador’s President, Rafael Correa, who is presiding over Habitat III, pointed to the Quito Implementation Plan, which defines “mechanisms, to follow-up on agreements that we are going to reach at this conference.”

He told the first plenary meeting: “We look forward to a decisive commitment by all Member States, to meet these goals in the next 20 years.”

He pointed to “erroneous concepts of development” in Latin America, which have now seen the continent become the most urban region of the world, thanks to uncontrolled “rural de-population.”

The Secretary-General of Habitat III, Joan Clos, who also heads up the UN Human Settlements Programme (UN-Habitat), has been leading the preparations towards Quito, and spoke of his excitement at the adoption of the New Urban Agenda, and what it meant for the overall pursuit of the 2030 Sustainable Development Goals.

He described the agenda as a “vision for a better and greener urban future, where everyone has access to the benefits of urbanization.”

Surveying the main hall on the opening morning, President of the UN General Assembly Peter Thomsonsaid “the many thousands of participants who have come to Quito […] are a testament of the importance of cities to our lives, of sustainable urban development to our world, and the New Urban Agenda to guiding humanity to a sustainable urban future.”

Secretary-General Ban also highlighted the “increasing numbers of poor and vulnerable people” making their lives in the expanding cities of the developing world in particular.”

A quarter of urban-dwellers live in slums conditions and lack access to basic services, he added.

This was an area of need where the SDGs clearly dovetailed with the Quito agenda he said: “To fulfil the promise of the 2030 Agenda, we must address the humiliation and exclusion of people living in poverty and empower their inclusion in building a better future,” he declared.