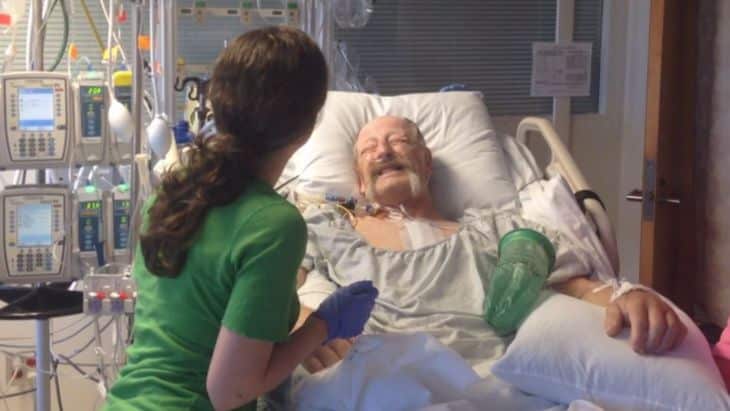 Please Share This Story!
PDF 📄
A patient struggles to live with a damaged heart, awaiting a transplant to save his life. The mRNA vaccines are well-known to cause Myocarditis and Pericarditis (inflammation of the heart). Medical Technocrats drop him from the transplant list because he refuses to take the vaccine that might kill him. Good medical care or total insanity?

Is the entire medical community suffering from over-the-top mass psychosis? We warned that denial of medical treatment would become commonplace for the unvaccinated, and it has arrived ahead of schedule. If it spreads to the nationwide health system, it will cause a mass die-off of patients who could have easily been treated and released.

National radio host Kate Dalley explained her recent ordeal after taking her husband to an emergency room to be treated for pneumonia. First, they forced him to wear a mask (really stupid for a man having trouble breathing), even though he was only there for oxygen treatment. Then they forced him into ICU and tried to force him onto a ventilator. It’s the protocols, they proclaimed. He refused. His wife argued incessantly with doctors, demanding known drug treatments, including massive treatment of intravenous Vitamin C. It’s against the protocols, they proclaimed. Nevertheless, they met most of her demands and to the utter amazement of the doctors, her husband walked out of the hospital healthy in 3 1/2 days. Dalley’s heartfelt conclusion: its not COVID that is killing people, it’s the protocols. Where do these “protocols” come from and who handed them down to every treatment center in the nation? The Center for Disease Control.

TN encourages you to read every single word of this article and consider your future in the hands of an insane medical community. Denial of treatment will not stop with face masks or vaccines, so even if you do both today, you can be sure that demands will increase and intensify over other issues. ⁃ TN Editor

The University of Washington Medical Center denied organ transplants to patients who refuse a COVID vaccine as early as June 2021. And hospital officials refuse to answer basic questions about their policy.

In fact, they won’t even directly acknowledge they have a policy.

The Jason Rantz Show on KTTH has learned that UW Medicine removed a 64-year-old patient from the transplant waitlist. He says he was on the list for two and a half years. The hospital made the decision after they learned the patient refused to be vaccinated against COVID. They said they would consider adding him back to the waitlist should he satisfy their “compliance concerns.”

Last week, one vaccine-hesitant patient came forward. He says he was told the vaccine was mandatory before he could get a necessary liver transplant. The hospital does not deny any of the allegations.

In June, Sam Allen of Monroe learned that his heart transplant surgery was on the line over his refusal to get the COVID vaccine.

He says three leaky heart valves impact the blood pumping into his lungs. Allen says it makes it difficult to breathe, which played a role in why he wouldn’t wear a mask. He previously underwent open-heart surgery, and he says his heart was damaged in the process.

After a disagreement over mask use, Allen says his doctor called him.

“The cardiologist called me and we had a discussion, and he informed me that, ‘well, you’re going to have to get a vaccination to get a transplant.’ And I said, ‘well that’s news to me. And nobody’s ever told me that before.’ And he says, ‘yeah, that’s our policy,’” Allen recalled.

Allen said he told the doctor he would not get vaccinated.

A few days later, Allen said he received a letter dated June 7, 2021. It informed him that he was pulled from the United Network for Organ Sharing (UNOS) waiting list for a heart.

“Your name has been removed from the waitlist at the University of Washington Medical Center. This was done in follow-up to your recent conversation with providers regarding the heart transplant selection committee’s concerns about compliance with COVID-19-related policies and recommendations,” the letter reads. “We can re-assess you for reinstatement on the waiting list should the compliance concerns resolve in the future or, if you wish, refer you to another center for evaluation in the meantime.”

It was signed by UW Medicine and the Cardiac Transplant/Advanced Heart Failure Therapies Selection Committee.

Allen says he wrote a letter to UW Medicine to express his disappointment with the decision. He shared the letter with the Jason Rantz Show on KTTH.

“I understand that my choices have repercussions but I did not change the policy. I am most put off, not by your decision to remove me from the list, thereby removing any opportunity to live out my life at a near-normal level, but by the lack of scientific logic that dictates your ‘policy,’” he wrote.

He points to the side effects associated with the vaccine as why he did not want to get it.

“As a person who has spent much time and money at UWMC as a heart failure patient, I am being told I cannot get care for my condition unless I take an injection that has shown to cause cardiac problems,” he wrote. “It seems that a wise choice would be to not make a panic move and run to get injected with the experimental gene therapy until more is known.”

On Aug. 10, Allen received a response.

Bo Secord, assistant director of patient relations, said they received his letter and that it was shared with “appropriate leadership.” But they weren’t budging.

“As your provider noted, they are happy to re-evaluate should you change your mind,” Secord wrote.

“Medical Technocrats drop him from the transplant list because he refuses to take the vaccine that might kill him. Good medical care or total insanity?”

Medical tyranny has arrived. What exactly is in this investigational, unapproved gene therapy shot that they of the medical, press and political elites are so committed to jabbing people with? It seems the drive to create the mass-hysteria was all to get to this point, this “vaccine” that isn’t a vaccine. It’s treated more like a sacrament of some bizarre religion.

‘He [the demon] caused all who worshiped it to take a mark on their right hand or on their forehead, that no one may buy or sell without it.’ This includes buying and selling of organs which the Commies have perfected their harvesting from the internment camps soon to be set up in USA. Conditions for the global one world government exist due to the technologies of track and trace, national and international databases of medical status and facial recognition, the pride of technocrats to oppress and divide the people of the world. The Good News is even in these… Read more »

My PCP won’t fill any prescriptions until I have a complete physical. Since my vaxx status will go on my medical record + bloodwork taken, etc, I won’t get a physical. Having foreseen this inevitability, I preemptively weaned myself off of the few meds I do take which are not really even needed, just wanted, and gave myself a crash course in herbal medicine, stocked up on the one essential med I might need: albuterol.

They do this because theres no comeback if they kill him with the shot.

[…] they agree to accept the jab. In Washington state, the University of Washington Medical Center took a man off of the heart transplant list because he refused. The University of Alberta hospital told their patient Annette Lewis she […]

[…] they agree to accept the jab. In Washington state, the University of Washington Medical Center took a man off of the heart transplant list because he refused. The University of Alberta hospital told their patient Annette Lewis she […]

Last week I read about a man in North Carolina who is required to get a covid jab to “qualify” for a kidney transplant. He says he’s not getting that shot and will die free. What’s even more asinine is that these organ transplant mandates were in place even before a covid jab was FDA approved! There were ten or more kidney transplant vaccine requirements pre covid. I think this insanity is just another way to punish the non-covid jabbed. I doubt that those who take or took a covid jab will live any longer than anyone who doesn’t take… Read more »