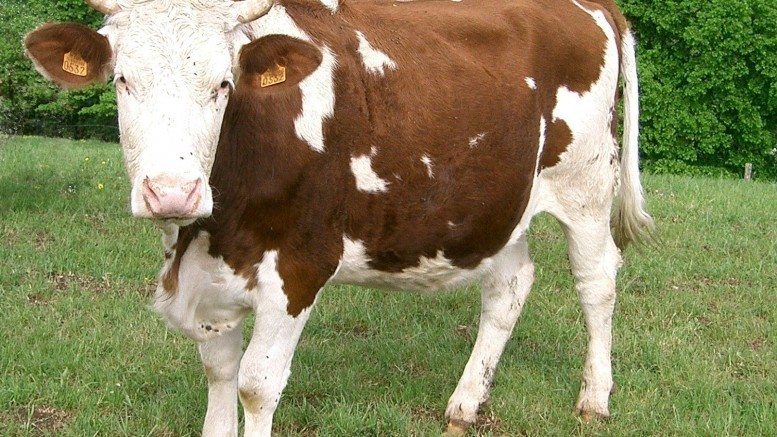 TN Note: No, this is not a joke. Cattle are on the environmental hit list because they release methane in their gaseous emissions. Some even suggest that cattle, not humans, are the real cause of global warming. Their conclusion: “Eat much less meat and dairy products.”

At her farm nestled in the green hills of northwestern France, Marie-Francoise Brizard is helping to curb a planet-wide menace: farting and belching cows implicated in global warming.

So far this year, Brizard says she has cut methane emissions from her herd of 40 Normandy cows that are equivalent to 32 tonnes of climate-changing carbon dioxide.

That is equal to the carbon pollution spewed out in a 470,000-kilometre (292,000-mile) car journey, according to a computer tracker provided to Brizard by a French initiative that promotes lower methane output from farms.

She does it by feeding the cattle more grass but less maize and soy, cutting down on the cattle’s output of methane, which comes mostly from belching but also from flatulence.

Ruminant animals emit methane, a gas that is more than 20 times more efficient than carbon dioxide in trapping the sun’s heat.

Agriculture contributes an estimated 20 percent of global greenhouse gas emissions, which the world’s governments hope to curb in a climate pact to be negotiated in a November 30-January 11 conference in Paris.

As his wife leads the cattle to milking at the 100-hectare (250-acre) farm in Mayenne, a district of the Pays de Loire region, Luc Brizard sets out to sow seeds: alfalfa and other fodder rich in proteins alternating with cereals.

Dried alfalfa allows the couple to feed the cattle in winter without recourse to industrial maize- and soy-based feed which makes up a fifth of the diet of an average herd in France. The cattle also get a small supplement of linseed grown on site.

Remember Fourth Grade Science? The Carbon Cycle: Grass take co2 from the air and turns it into sugar. The cows eat the grass, burn the sugar and turn it back into co2. Their gut flora takes a little if that carbon and turns it into methane, which is released and it is quickly turned into co2 also: NO NET CHANGE in co2 levels. Carbon is the basis of all life on earth. We would already be in, or heading for an ice age without carbon. If you believe that any REAL scientist believes this stuff and that it ios not… Read more »