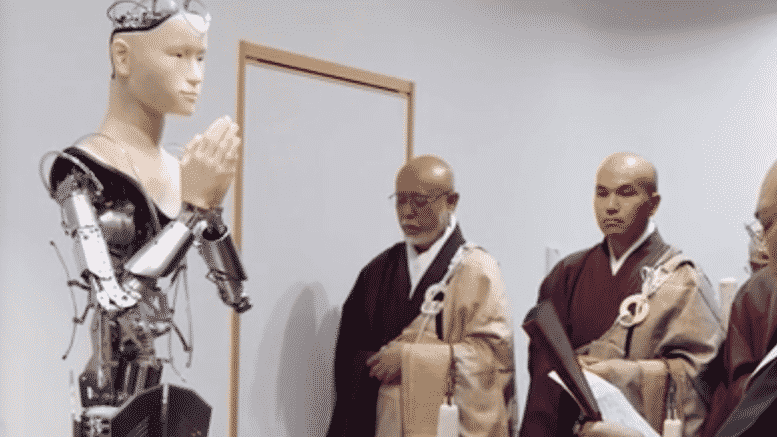 Please Share This Story!
PDF 📄
Religious Technocrats in Japan have solved their boring human priest problems by creating a tireless robot who serves in the Buddhist temple to lead worshippers. ⁃ TN Editor

A 400-year-old temple in Japan is attempting to hot-wire interest in Buddhism with a robotic priest it believes will change the face of the religion — despite critics comparing the android to “Frankenstein’s monster.”

The android Kannon, based on the Buddhist deity of mercy, preaches sermons at Kodaiji temple in Kyoto, and its human colleagues predict that with artificial intelligence it could one day acquire unlimited wisdom.

“This robot will never die, it will just keep updating itself and evolving,” priest Tensho Goto told AFP.

“That’s the beauty of a robot. It can store knowledge forever and limitlessly.

“With AI we hope it will grow in wisdom to help people overcome even the most difficult troubles. It’s changing Buddhism,” added Goto.

The adult-sized robot began service earlier this year and is able to move its torso, arms and head.

But only its hands, face and shoulders are covered in silicone to replicate human skin.

Clasping its hands together in prayer and speaking in soothing tones, the rest of the droid’s mechanical parts are clearly visible.

Wiring and blinking lights fill the cranial cavity of its open-top head and snake around its gender-neutral, aluminium body.

Developed at a cost of almost $1m in a joint project between the Zen temple and renowned robotics professor Hiroshi Ishiguro at Osaka University, the humanoid — called Mindar — teaches about compassion and of the dangers of desire, anger and ego.

“You cling to a sense of selfish ego,” it warns worshippers. “Worldly desires are nothing other than a mind lost at sea.”

“Young people probably think a temple is a place for funerals or weddings,” he said, trying to explain the disconnect with religion.