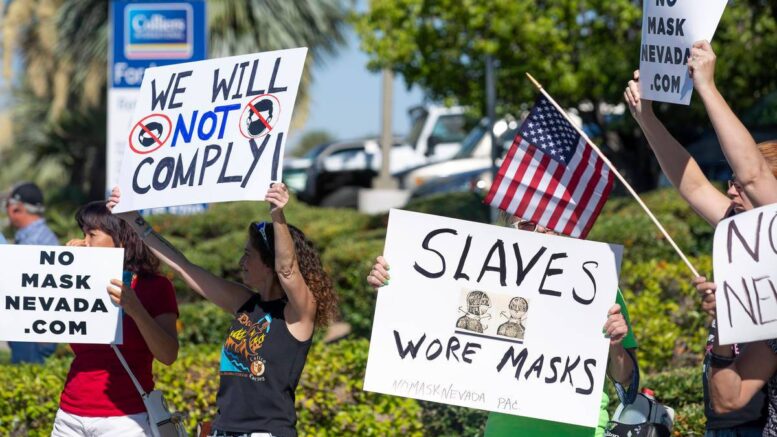 Please Share This Story!
PDF 📄
This is a must-read article from a widely-respected medical expert. Since Technocracy is a global movement, there is now a definable global uprising of resistance taking place to send it all back into the last century where it belongs. ⁃ TN Editor

After six months of intermittent or in some cases near-continuous lockdowns, many have reached their limit and uprisings are finally emerging around the world. The last week of August 2020 saw gatherings of tens of thousands of individuals in Berlin,1 London2 and Dublin,3 protesting stay-at-home orders, business closures, mask and vaccine mandates and Bill Gates’ dictatorial grip on public health matters.

In the U.S., a protest took place August 30, 2020, in Boston, Massachusetts, against a new student flu vaccination mandate,4 and in Virginia, protesters gathered September 2 in opposition of unconstitutional COVID-19 mandates.5

These are just a few of the many demonstrations that have taken place in recent weeks around the world, as people are starting to realize their human rights are being stripped away over a virus with a lethality on par with that of seasonal influenza and other pandemic viruses, none of which was responded to with a global shutdown of economies and forced quarantining of healthy individuals.

In recent weeks and months, more and more experts have come out sharing what they know about the roles of Big Tech, Big Pharma and global health organizations such as the World Health Organization in the creation of a new technocratic world order.

If you missed my interview with financial analyst Patrick Wood, in which he details the technocratic take-over plan, which has been in play for decades, be sure to review it now. Other articles shedding light on what’s happening behind the scenes include “Harvard Professor Exposes Google and Facebook,” featuring a documentary with professor Shoshana Zuboff, and “Plandemic Part 2.”

When you start to put all the puzzle pieces together, it seems clear this pandemic is being used as a cover story for both a global wealth redistribution scheme, and for the implementation of a technocratic system of totalitarian rule by unelected leaders.

The WHO seems to be part and parcel of this global network. While the U.S. has severed ties with the organization, Big Tech is still promoting the WHO as a final arbiter of which views are acceptable and which are not — medical expertise and scientific achievements be damned.

As reported by Reclaim the Net,6 the WHO eavesdrops on everything you do online, from reviewing your social media interactions to analyzing your emotions. To counteract “spread of misleading information” about the pandemic — which was a key area of focus during Event 201 — the WHO has partnered with an analytics company that uses machine learning analysis to scan more than 1.6 million social media posts per week.

The aim of this “social listening approach”— a nicer term than good old-fashioned spying — is to counteract anything that doesn’t align with the WHO’s current narrative on illnesses, treatments, interventions and causes of disease.

Aiding them in this dystopian censoring process is the United Nations, which has launched an army of 10,000 digital volunteers who troll the internet for “false” information and opposing views.

On top of that, most social media platforms have their own highly biased “fact-checkers” who censor for all they’re worth. Back in April 2020, YouTube CEO Susan Wojcicki, wife of Google product director Dennis Troper, announced they would ban and remove any video from the platform that contradicts the WHO.7

Countless examples of wanton censorship of perfectly valid medical and scientific information across all social media platforms and Google can be found at this point.

According to groundbreaking data8 recently released by the U.S. Centers for Disease Control and Prevention, only 6% of the total COVID-19-related deaths in the U.S. had COVID-19 listed as the sole cause of death on the death certificate.

Six percent of 169,044 (the total death toll as of September 2) is 10,143. “For deaths with conditions or causes in addition to COVID-19, on average, there were 2.6 additional conditions or causes per death,” the CDC states. As reported by Rochester First,9 the top underlying medical conditions included influenza, pneumonia, respiratory failure, high blood pressure, diabetes, dementia, heart problems and renal failure.

However, the list also includes 5,424 intentional and unintentional injury and poisoning deaths, so basically, accidents and suicides in which the individual just happened to test positive (or was suspected of being positive for SARS-CoV-2) are also included in the grand total.

(Please note, these data were accurate as of this writing. The CDC does not notate when data is altered as new death certificates come in, so the numbers may therefore be different from what is reported here, depending on when you’re looking at it. For the most up-to-date figures, see the CDC’s website.10)

The fact that only 6% of COVID-19-related deaths are directly attributable to SARS-CoV-2 is bad news when you’re trying to keep a doomsday narrative going. In what appears to be a blatant attempt to minimize exposure of these data, social media platforms have censored many trying to share it.11

As noted by independent news commentator Tim Pool in the video below, fact-checkers are digging into nitpicky semantics in their effort to censor the CDC data, and in so doing, they’re really stretching the “false” claim ultrathin.

It is possible that the ‘crats goal is to apply the shot. Population control. They don’t seem to be the types that want to help man-kind.

They will make money with patents.

Two birds with one stone.

The medical profession is quickly losing its credibility. Right up there with lawyers, politicians, and the Post Office.

The resistance is growing, the people are tiring of the arbitrary and scientifically unfounded lock downs, restrictions and economic sabotage by the ruling class. Let’s hope the resistance continues, the ranks of free thinkers swell and the ruling elites’ agenda is thwarted and derailed.