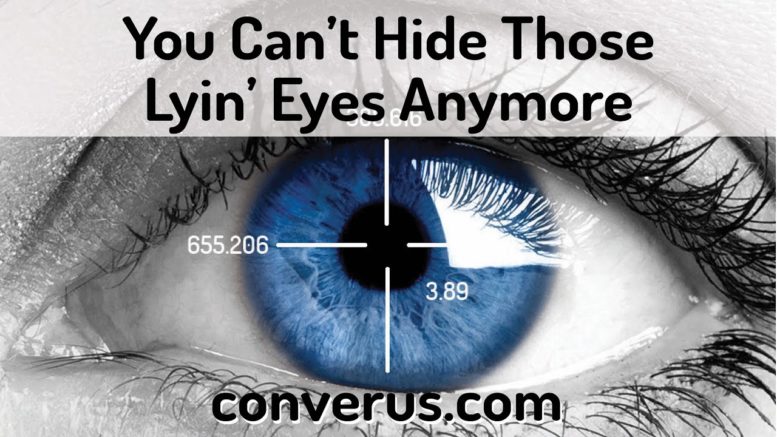 By Conversus own admission, its system is wrong 14% of the time, i.e., it only tells the truth about 86% of the time and after that, it lies. Yes, the lie detector lies when it mis-judges you, and it can negatively change the course of your life. ⁃ TN Editor

Sitting in front of a Converus EyeDetect station, it’s impossible not to think of Blade Runner. In the 1982 sci-fi classic, Harrison Ford’s rumpled detective identifies artificial humans using a steam-punk Voight-Kampff device that watches their eyes while they answer surreal questions. EyeDetect’s questions are less philosophical, and the penalty for failure is less fatal (Ford’s character would whip out a gun and shoot). But the basic idea is the same: By capturing imperceptible changes in a participant’s eyes—measuring things like pupil dilation and reaction time—the device aims to sort deceptive humanoids from genuine ones.

It claims to be, in short, a next-generation lie detector. Polygraph tests are a $2 billion industry in the US and, despite their inaccuracy, are widely used to screen candidates for government jobs. Released in 2014 by Converus, a Mark Cuban–funded startup, EyeDetect is pitched by its makers as a faster, cheaper, and more accurate alternative to the notoriously unreliable polygraph. By many measures, EyeDetect appears to be the future of lie detection—and it’s already being used by local and federal agencies to screen job applicants. Which is why I traveled to a testing center, just north of Seattle, to see exactly how it works.

Unlike a polygraph, EyeDetect is fast and largely automatic. This bypasses one of the pitfalls of polygraphs: human examiners, who can carry their biases when they interpret tests. According to Walters, biases don’t really “come into play” with EyeDetect, and the test takes a brisk 30 minutes as opposed to the polygraph’s 2- to 4-hour-long slog. Moreover, EyeDetect is a comfortable experience for the test subject. ”When I was wired up for the polygraph, it was kind of intimidating,” Walters told me. “Here you just sit and look into the machine.”

I settle in for a demonstration: a swift 15-minute demo where the test will guess a number I’m thinking of. An infrared camera observes my eye, capturing images 60 times a second while I answer questions on a Microsoft Surface tablet. That data is fed to Converus’ servers, where an algorithm, tuned and altered using machine learning, calculates whether or not I’m being truthful.

The widely accepted assumption underlying all of this is that deception is cognitively more demanding than telling the truth. Converus believes that emotional arousal manifests itself in telltale eye motions and behaviors when a person lies.

Converus claims that EyeDetect is “the most accurate lie detector available,” boasting 86 percent accuracy. By comparison, many academics consider polygraph tests to be 65 to 75 percent accurate. The company already claims close to 500 customers in 40 countries, largely using the EyeDetect for job screening. In the US, this includes the federal government as well as 21 state and local law enforcement agencies, according to Converus. The Department of State recently paid Converus $25,000 to use EyeDetect when vetting local hires at the US Embassy in Guatemala, WIRED’s reporting revealed. Converus says its technology has also been used in an internal investigation at the US Embassy in Paraguay.

In documents obtained through public records requests, Converus says that the Defense Intelligence Agency and the US Customs and Border Protection are also trialing the technology. Converus says that individual locations of Best Western, FedEx, Four Points by Sheraton, McDonald’s, and IHOP chains have used the tech in Guatemala and Panama within the last three years. (A 1988 federal law prohibits most private companies from using any kind of lie detector on staff or recruits in America.) WIRED reached out to all five companies, but none were able to confirm that they had used EyeDetect.