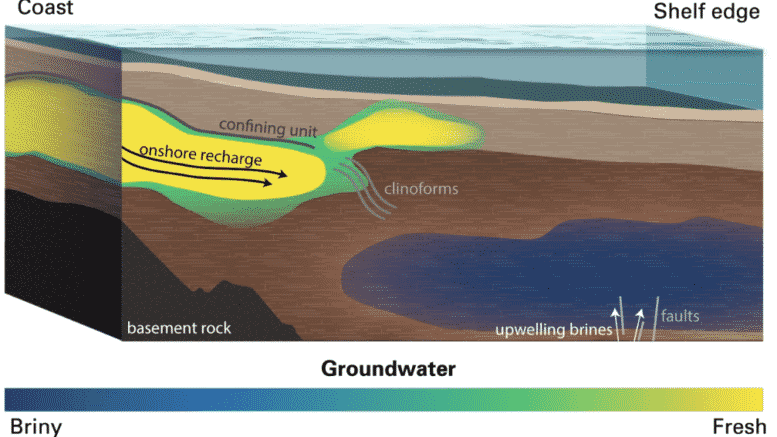 Please Share This Story!
PDF 📄
There has never been a global shortage of water, but geologists have discovered virtually unlimited near-fresh aquifers underneath the oceans. One such structure off the East Coast contains more than 2.8 trillion tons of water.

The United Nations states that “Water scarcity already affects every continent,” and of course, the shortage is blamed on global warming. Instead of creating artificial shortages, mankind should be thanking the earth for its abundance of resources. ⁃ TN Editor

Low-salinity submarine groundwater contained within continental shelves is a global phenomenon. While low-salinity groundwater is thought to be abundant, its distribution and volume worldwide is poorly understood due to the limited number of observations.

The data suggest a continuous submarine aquifer system spans at least 350 km of the U.S. Atlantic coast and contains about 2800 km3 (2.8 trillion tons) of low-salinity groundwater. The findings can be used to improve models of past glacial, eustatic, tectonic, and geomorphic processes on continental shelves and provide insight into shelf geochemistry, biogeochemical cycles, and the deep biosphere.

This could be a significant resource with potential for future offshore groundwater production. Given the 90 km offshore extent, 350 km distance between profiles, about 200 m thickness and 45% average porosity, we estimate the aquifer system contains at least 2800 km3 of water with salinity less than 15. If we consider the potential northeast and southwest extensions beyond our profiles, there may be several times more groundwater underlying the northeast portion of the U.S. Atlantic continental shelf, representing a freshwater resource that rivals the largest onshore aquifers. Utilization of such groundwater would require desalinization and effects such as upconing should be considered prior to extraction.

And it came to pass after seven days, that the waters of the flood were upon the earth. In the six hundredth year of Noah’s life, in the second month, the seventeenth day of the month, the same day were all the fountains of the great deep broken up, and the windows of heaven were opened. And the rain was upon the earth forty days and forty nights. Genesis 7:10-12. Yes, we knew about that. Know this that the Bible says next time God will destroy the earth with fire and brimstone.

Go ahead and drill and you will reach primary water jus about anywhere on the globe, clean and for free.

Anyone can take a bucket with sea water and with 2 glass bottles and woodfire make fresh water as mother nature does it.

If any doubt about the quality outcome, small stone fractions and charcoal can filtre it to drinking water.