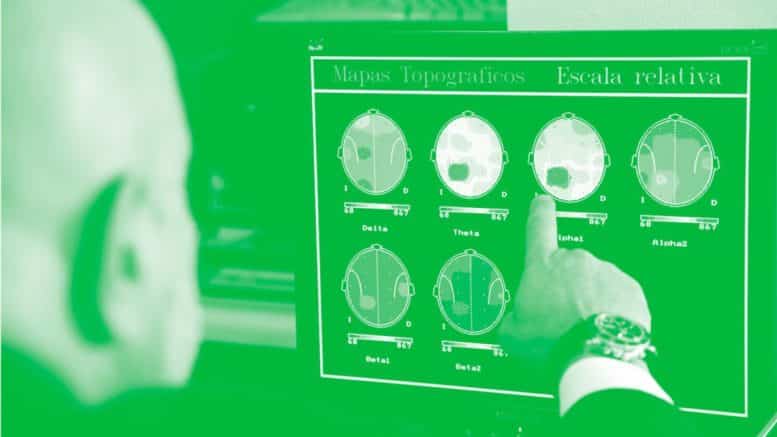 Neuroscience is racing ahead of people’s ability to comprehend what it is doing to them. Your simple pictures that exist everywhere these days can produce an emotional profile that can then be manipulated in order to change your mind on an issue. What if the AI give a false analysis and bad data gets stamped into your profile record? Too bad. ⁃ TN Editor

Maria Pocovi slides her laptop over to me with the webcam switched on. My face stares back at me, overlaid with a grid of white lines that map the contours of my expression. Next to it is a shaded window that tracks six “core emotions”: happiness, surprise, disgust, fear, anger, and sadness. Each time my expression shifts, a measurement bar next to each emotion fluctuates, as if my feelings were an audio signal. After a few seconds, a bold green word flashes in the window: ANXIETY. When I look back at Pocovi, I get the sense she knows exactly what I’m thinking with one glance.

Petite with a welcoming smile, Pocovi, the founder of Emotion Research Lab in Valencia, Spain, is a global entrepreneur par excellence. When she comes to Silicon Valley, she doesn’t even rent an office—she just grabs a table here at the Plug and Play coworking space in Sunnyvale, California. But the technology she’s showing me is at the forefront of a quiet political revolution. Campaigns around the world are employing Emotion Research Lab and other marketers versed in neuroscience to penetrate voters’ unspoken feelings.

This spring there was a widespread outcry when American Facebook users found out that information they had posted on the social network—including their likes, interests, and political preferences—had been mined by the voter-targeting firm Cambridge Analytica. While it’s not clear how effective they were, the company’s algorithms may have helped fuel Donald Trump’s come-from-behind victory in 2016.

But to ambitious data scientists like Pocovi, who has worked with major political parties in Latin America in recent elections, Cambridge Analytica, which shut down in May, was behind the curve. Where it gauged people’s receptiveness to campaign messages by analyzing data they typed into Facebook, today’s “neuropolitical” consultants say they can peg voters’ feelings by observing their spontaneous responses: an electrical impulse from a key brain region, a split-­second grimace, or a moment’s hesitation as they ponder a question. The experts aim to divine voters’ intent from signals they’re not aware they’re producing. A candidate’s advisors can then attempt to use that biological data to influence voting decisions.

Political insiders say campaigns are buying into this prospect in increasing numbers, even if they’re reluctant to acknowledge it. “It’s rare that a campaign would admit to using neuromarketing techniques—though it’s quite likely the well-funded campaigns are,” says Roger Dooley, a consultant and author of Brainfluence: 100 Ways to Persuade and Convince Consumers with Neuromarketing. While it’s not certain the Trump or Clinton campaigns used neuromarketing in 2016, SCL—the parent firm of Cambridge Analytica, which worked for Trump—has reportedly used facial analysis to assess whether what voters said they felt about candidates was genuine.

But even if US campaigns won’t admit to using neuromarketing, “they should be interested in it, because politics is a blood sport,” says Dan Hill, an American expert in facial-expression coding who advised Mexican president Enrique Peña Nieto’s 2012 election campaign. Fred Davis, a Republican strategist whose clients have included George W. Bush, John McCain, and Elizabeth Dole, says that while uptake of these technologies is somewhat limited in the US, campaigns would use neuromarketing if they thought it would give them an edge. “There’s nothing more important to a politician than winning,” he says.

The trend raises a torrent of questions in the run-up to the 2018 midterms. How well can consultants like these use neurological data to target or sway voters? And if they are as good at it as they claim, can we trust that our political decisions are truly our own? Will democracy itself start to feel the squeeze?

Brain, eye, and face scans that tease out people’s true desires might seem dystopian. But they’re offshoots of a long-standing political tradition: hitting voters right in the feels. For more than a decade, campaigns have been scanning databases of consumer preferences—what music people listen to, what magazines they read—and, with the help of computer algorithms, using that information to target appeals to them. If an algorithm shows that middle-aged female SUV drivers are likely to vote Republican and care about education, chances are they’ll receive campaign messages crafted explicitly to push those buttons.

Biometric technologies raise the stakes further. Practitioners say they can tap into truths that voters are often unwilling or unable to express. Neuroconsultants love to cite psychologist Daniel Kahneman, winner of the Nobel Prize in economics, who distinguishes between “System 1” and “System 2” thinking. System 1 “operates automatically and quickly, with little or no effort and no sense of voluntary control,” he writes; System 2 involves conscious deliberation and takes longer.

“Before, everyone was focused on System 2,” explains Rafal Ohme, a Polish psychologist who says his firm, Neurohm, has advised political campaigns in Europe and the United States. For the past decade, Ohme has devoted most of his efforts to probing consumers’ and voters’ System 1 leanings, which he thinks is as important as listening to what they say. It’s been great for his business, he says, because his clients are impressed enough with the results to keep coming back for more.

Many neuroconsulting pioneers built their strategy around so-called “neuro-­focus groups.” In these studies, involving anywhere from a dozen to a hundred people, technicians fit people’s scalps with EEG electrodes and then show them video footage of a candidate or campaign ad. As subjects watch, scalp sensors pick up electrical impulses that reveal, second by second, which areas of the brain are activated.

“One of the things we can analyze is the attentional process,” says Mexico City neurophysiologist Jaime Romano Micha, whose former firm, Neuropolitka, was one of the top providers of brain-based services to political campaigns. Romano Micha would place electrodes on a subject’s scalp to detect activity in the reticular formation, a part of the brain stem that tracks how engaged someone is. So if subjects are watching a political ad and activity in their reticular formation spikes, say, 15 seconds in, it means the message has truly caught their attention at that point.