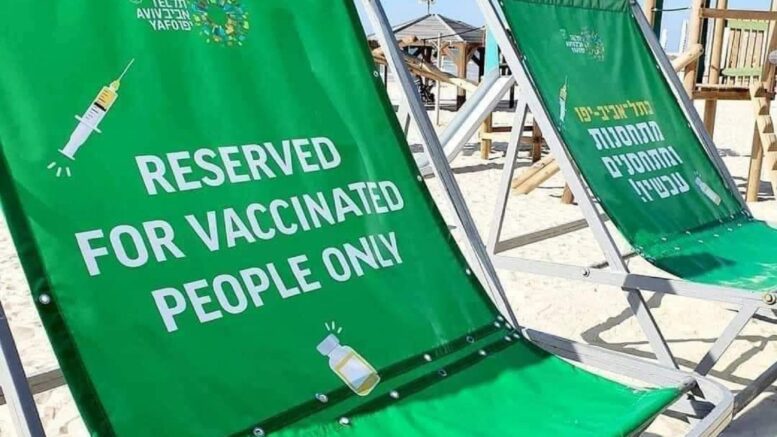 Please Share This Story!
PDF 📄
The emerging purpose of the globalist-inspired and executed pandemic is to force everyone into compliance and into their web of control. For those who are not shamed and bullied into taking the vaccine, they can expect exclusion from many aspects of society, such as travel, entrance into certain stores, limited access to government facilities, etc. ⁃ TN Editor

There is no place for us in New Normal society. The New Normals know this and so do we. To them, we are a suspicious, alien tribe of people. We do not share their ideological beliefs. We do not perform their loyalty rituals, or we do so only grudgingly, because they force us to do so.

They do not trust us. We are strangers among them. They suspect we feel superior to them. They believe we are conspiring against them, that we want to deceive them, confuse them, cheat them, pervert their culture, abuse their children, contaminate their precious bodily fluids, and perpetrate God knows what other horrors.

In the words of someone (I can’t quite recall who), “getting rid of the Unvaccinated is not a question of ideology. It is a question of cleanliness,” or something like that. (I’ll have to hunt down and fact-check that quote. I might have taken it out of context.)

In Israel, Estonia, Denmark, Germany, the USA, and other New Normal countries, they have already begun the segregation process.

In the UK, it’s just a matter of time. The WEF, WHO, EU, and other transnational entities are helping to streamline the new segregation system, which, according to the WEF,

Here in Germany, the government is considering banning us from working outside our homes. We are already banned from flying on commercial airlines. (We can still use the trains, if we dress up like New Normals.)

In the village of Potsdam, just down the road from Wannsee (which name you might recall from your 20th-Century history lessons), we are banned from entering shops and restaurants. (I’m not sure whether we can still use the sidewalks, or whether we have to walk in the gutters.)

In Saxony, we are forbidden from attending schools. At the Berliner Ensemble (the theater founded by Bertolt Brecht and Helene Weigel, lifelong opponents of totalitarianism and fascism), we are banned from attending New Normal performances.

In New York, the new “Excelsior Pass” will allow New Normals to attend cultural and sports events (and patronize bars and restaurants, eventually) secure in the knowledge that the Unvaccinated have been prevented from entering or segregated in an “Unvaccinated Only” section.

The pass system, designed by IBM, which, if history is any guide, is pretty good at designing such systems (OK, technically, it was Deutsche Hollerith Maschinen Gesellschaft, IBM’s Nazi-Germany subsidiary), was launched this past weekend to considerable fanfare.

And this is only the very beginning.

Israel’s “Green Pass” is the model for the future, which makes sense, in a sick, fascistic kind of way. When you’re already an apartheid state, what’s a little more apartheid? Here’s a peek at what that looks like… 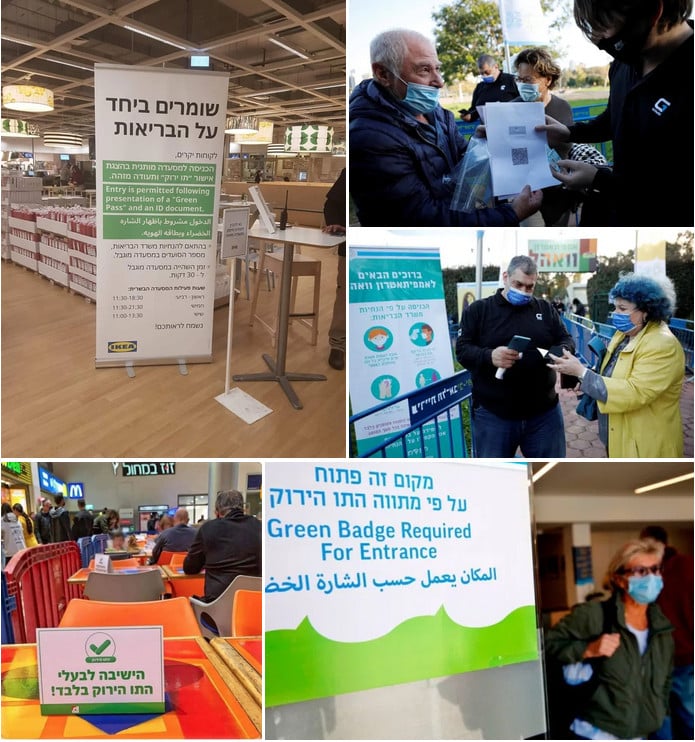 OK, I know what the New Normals are thinking. They’re thinking I’m “misleading” people again. That I’m exaggerating. That this isn’t really segregation, and certainly nothing like “medical apartheid.”

After all (as the New Normals will sternly remind me), no one is forcing us to get “vaccinated.” If we choose not to, or can’t for medical reasons, all we have to do is submit to a “test” — you know, the one where they ram that 9-inch swab up into your sinus cavities — within 24 hours before we want to go out to dinner, or attend the theater or a sports event, or visit a museum, or attend a university, or take our children to school or a playground, and our test results will serve as our “vaccine passports!”

We just present them to the appropriate Covid Compliance Officer, and (assuming the results are negative, of course) we will be allowed to take part in New Normal society just as if we’d been “vaccinated.”

Either way, “vaccine” or “test,” the New Normal officials will be satisfied, because the tests and passes are really just stage props. The point is the display of mindless obedience.

Even if you take the New Normals at their word, if you are under 65 and in relatively good health, getting “vaccinated” is more or less pointless, except as a public display of compliance and belief in the official Covid-19 narrative (the foundation stone of the New Normal ideology).

Even the high priests of their “Science” confess that it doesn’t prevent you spreading the “plague.” And the PCR tests are virtually meaningless, as even the WHO finally admitted. (You can positive-PCR-test a pawpaw fruit…but you might want to be careful who you tell if you do that.)

“Non-Vaxxers Will Have No Place In The ‘New Normal’ Society”Okay, and Vaxxers will have a place in the cemetery. I can live with that.

So can I. When the vaxxers die off and we are left they will want our money then. There will be plenty of places that we free of vax people can go. We will make our own lives without the abuse that comes with the vaxed.

SPOT ON!! Patience IS a VIRTUE!! and shall be rewarded!! in a number of ways that are vital!

Has anyone been able to track down Dr. Derek Knauss who allegedly stated that he retested 1500 PCR tests that came up positive for Influenza A and B and not Covid, thus proving Covid-19 does not exist? Dr. Fuellmich and company already proved the PCR fraud. For those of us that litigate we have to present verifiable proof in a court room.

Let us know back here if you find it (and where), if you would.

[…] Non-Vaxxers Will Have No Place In The ‘New Normal’ Society https://www.technocracy.news/non-vaxxers-will-have-no-place-in-the-new-normal-society/ […]

Look at it on the bright side. The vaxxers are together in closed separate rooms in the new normal breathing at each other, while the non-vaxxers are sitting outside in fresh air.