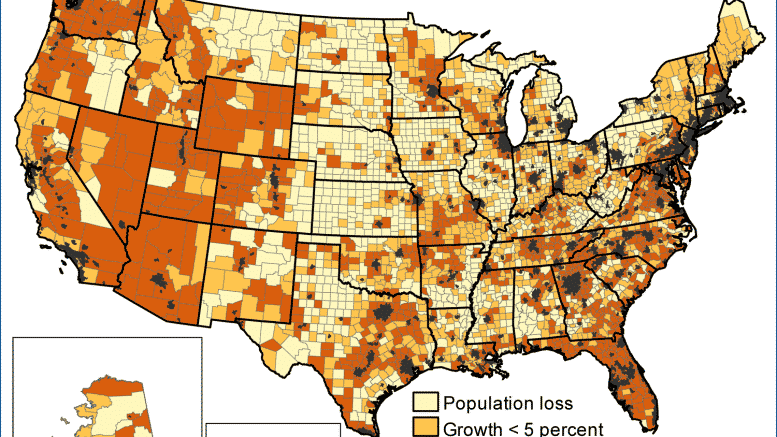 The claim of anthropogenic global warming (AGW) was the final strategy used to bully the world into accepting that the world was on a path of self-destruction. The sequence promoted by the Club of Rome (COR) was that world population was growing at an unsustainable rate relative to the resources. It took the Malthusian idea that population would outgrow food supply and applied it to all resources. The increasing pressure was a combination of increasing overall population, amplified by development, so each person was demanding more each year.

The socialists in the COR like Mikhail Gorbachev, who said in 1997 “We are moving to a New World Order” and Maurice Strong, who speculated that the problem for the world was the industrialized nations, saw the political opportunity. CO2 was the byproduct of burning fossil fuels that those industrialized nations were using resources at an unsustainable rate. The political objective was to create a world government with the power to punish the developed nations by making them pay and redistribute that ill-gotten wealth to the under-developed nations who were suffering the impact of global warming. The science was deliberately created to prove CO2 was the problem and the Kyoto Protocol (KP) and its successor the Green Climate Fund (GCF) were designed to collect the fine and transfer the wealth following classic socialist principles.

Most of the world still thinks that global warming is the problem, but an increasing number are aware it is a contrived problem. However, most of those who know it is contrived still believe overpopulation is a problem. It is not; it is also contrived. Most of the world’s population occupies about 4 percent of the total land surface (Figure 1). Don’t believe me on this, Paul Ehrlich, who started the false overpopulation claim with his 1968 book “The Population Bomb,” said it. His credibility is determined by his failed predictions. For example, he wrote,

“The battle to feed humanity is over. In the 1970s, the world will undergo famines. Hundreds of millions of people are going to starve to death in spite of any crash programs embarked upon now. Population control is the only answer.”

On the second day of a search and rescue mission out of Fort Chipewyan in northern Alberta, we carried the brother of the missing plane owner and his wife. After a morning of searching along the flight path to Edmonton, the man came into the cockpit and angrily accused us of flying circles, and he was going to report us to former Governor Brown of California. I showed him the map of the approximately 10,000 square miles we had covered that morning in a regular search pattern (CLA). He said I have not seen a road, a house, a village, a person, nothing. I said welcome to Canada. His only ‘apology’ consisted of saying as he left the airplane, “I will never believe in overpopulation again.”

Most of the world is unoccupied with population concentrated in flood plains and deltas. Canada is the second largest country in the world with approximately 33.6 million residents (2009). California had a 2008 population of 36.8 million people. Statistically, the entire population fits certain islands or regions. For example, Texas at 7,438,152,268,800 square feet divided by a world population of 6,774,436,692 gives 1098 sq. ft. per person. Fitting them in is different from the ability to live there. Population geographers distinguish between ecumene, the inhabited area, and non-ecumene, the uninhabited areas. Habitable areas change all the time. The area of the earth that is habitable has changed because of technology, communications, and food production capacity. 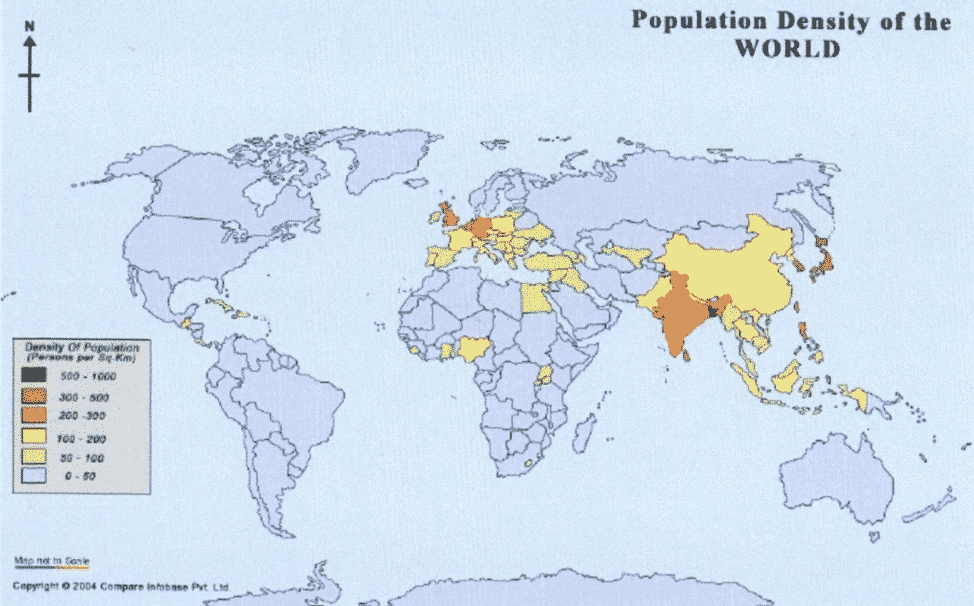 Governments and academics talk about population statistics as if they know what is going on. For a more realistic perspective consider numbers given for world population. The US Census Bureau provides a running estimate of population, and it was 6,994,551,619 on February 15, 2012. This contradicts the UN claim that it passed 7 billion on October 30, 2011. The difference is 5,448,381. This is more than the population of 129 countries of the 242 listed by Wikipedia. It is greater than Finland or Ireland. It illustrates how most statistics are crude estimates, especially those of the UN who rely on individual member countries and no accurate census exists for any country. This includes the US that spends more money and effort than any other nation.

Everybody knows about Al Gore’s involvement in promoting the deception of global warming, but few know his influence in organizing the 1994 International Conference on Population and Development in Cairo, Egypt. It was the third conference after the first in Budapest in 1974 and the second in Mexico City in 1984. The Cairo conference emerged from the 1992 Rio conference where they linked population to all other supposed problems.

“Explicitly integrating population into economic and development strategies will both speed up the pace of sustainable development and poverty alleviation and contribute to the achievement of population objectives and an improved quality of life of the population.”

John Holdren, a co-author with Paul Ehrlich of the 1977 book “Ecoscience: Population, Resources, Environment” and later Obama’s Director of the White House Office of Science and Technology Policy, linked the three and recommended drastic almost total population control including compulsory abortions. In his confirmation hearing, Holdren said he no longer held the extreme views expressed in the book. There are two problems. First, he still believes the world is overpopulated. Second, even if a majority of his views are changed, they are still extreme.

Claims of human-caused global warming are the biggest deception in history and claims of overpopulation are a close second. It is no surprise that they engender a massive misdirection. While they are blaming development for overpopulation, the evidence is that the best way to reduce population is development.

In fact, what happens is that as a nation develops the population declines. It is known as the Demographic Transition (Figure 2). 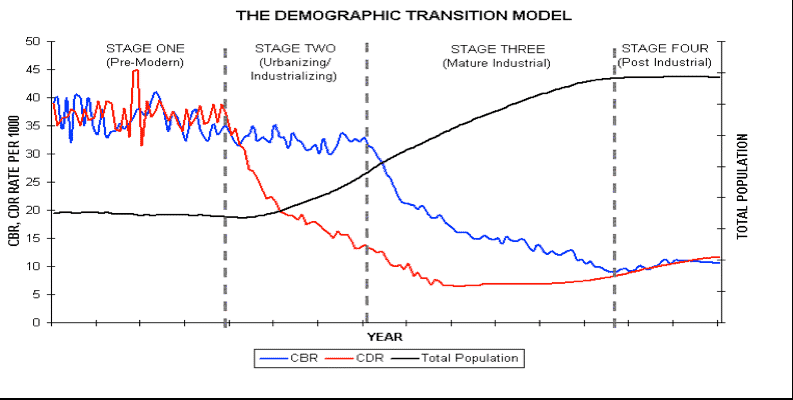 It shows, and statistics confirm, population declines as nations industrialize and develop. It is so dramatic in developed countries it means there are too few young people to support the massively expensive social programs for the elderly. Figures 3 to 5 show the population pyramids for three different nations and illustrate the real story of population and migration. 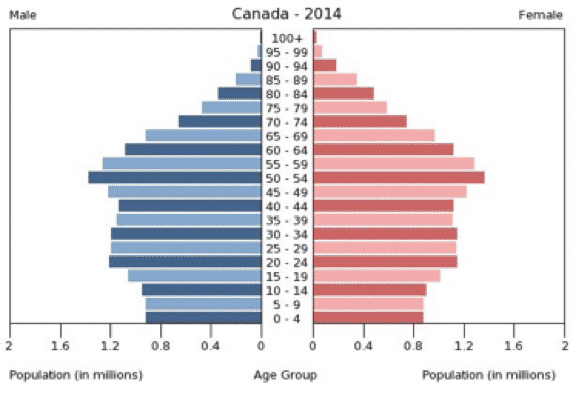 What happens in developed countries like Canada is they do not produce enough children to maintain the population. So, most of them offset the deficit by encouraging immigration. The debate about how many and who you allow in is raging in the US right now.  Regardless of the outcome, and it appears the US is looking at the Canadian model of merit-based immigration, they do not address the larger problem of the global impact. When they take the skilled people from the developing nations, they reduce their ability to develop. 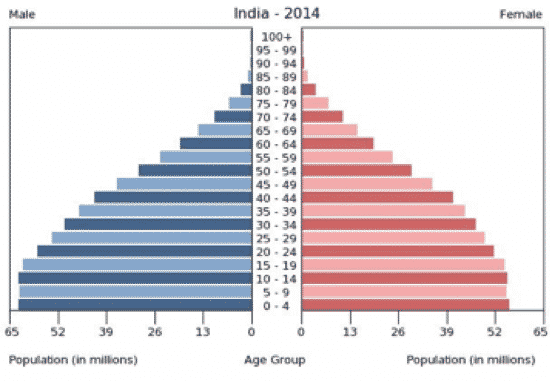 Figure 4 shows the pyramid for India and the opposite problem of not enough young people – too many. These are generally unproductive members of the society and place a huge burden on funds available for development. Japan (Figure 5) is at the other extreme. They do not offset a declining population with immigration and as a result, do not have the people to support the aging population. Compare the percentage of the population between 80-84 in Japan and India. 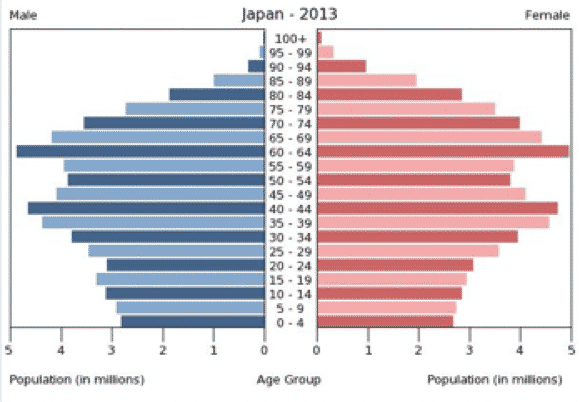 Political exploitation of the valuable concept of environmentalism usually creates situations where the proper solution is ignored. The eco-bullying that occurs with all these issues combines with politics to stifle debate, marginalize experts, and ignore solutions, both proven and potential. Overpopulation is a classic example. It was never a problem and even if it was the solution is development, the very thing they blame for the overpopulation.

Dr. Tim Ball is a renowned environmental consultant and former professor of climatology at the University of Winnipeg. He has served on many local and national committees and as Chair of Provincial boards on water management, environmental issues and sustainable development. Dr. Ball's extensive science background in climatology, especially the reconstruction of past climates and the impact of climate change on human history and the human condition, made him the perfect choice as the Chief Science Adviser with the International Climate Science Coalition.
5
0
0
3

Dr. Ball makes some excellent observations. I would add one important nuance: the environmental groups are not only against the claimed challenges of “over-population,” their primary belief is that people are the problem. In other words, although they advocate population control supposedly because we are running out of resources, their real objective is to reduce man’s perceived negative impact on nature. To them: the fewer people, the better. This is the same objective that the anti-fossil fuel campaign has. If we stopped using all fossil fuels, we would be quickly transformed into an 1800’s agrarian society with an enormous reduction… Read more »

Too many are complicit in the destruction of all things for profit, particularly as sycophants of the uber-wealthy psychopaths that manufacture wars, create “terrorism”, divide and conquer into Hobson’s choice of 2 or more of the same. Herded into cities that are themselves unsustainable, progress is anything but that for the vast majority, both of which are preoccupied with moving from one amusement to another has shown no regard for future generations and no respecting each other and respecting our place in the web of life we participate in. The rise and fall of some of the most massive cities… Read more »

Have you ever noticed that all the areas, in which they want to cram the population, is where they expect future “earth Changes” to be put under water?

The Curious Relationship Between Climate Change, Immigration And Abortion

[…] on the poor economy created by failed fiscal policy. The country they enter needs them because natural birthrates decline as a nation develops. In order to sustain their developed economy, they must fill the gap between the declining birth […]

Was climate change alarmism always about fears of overpopulation? | Watts Up With That?

[…] related to a fear of reaching another terrestrial set of limits through overpopulation. Indeed, Dr. Ball goes so far as to argue that while global warming is a “contrived problem,” most of those […]