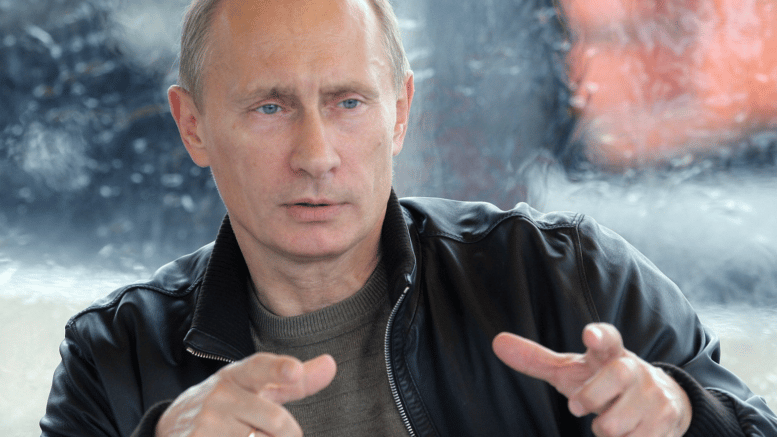 Posted By: Nicholas James via The Conversation November 4, 2022

Please Share This Story!
PDF 📄
No matter what the outcome of the Russia/Ukraine war, Technocracy and Technocrats will have an assertive role in Russia’s future. Russia is already closely aligned with China, the largest Technocratic nation in the world. The West can protest evil China and Russia all it wants, but they intend to ultimately flip the entire world into Technocracy. ⁃ TN Editor

Speculation regarding how secure Vladimir Putin’s position is surfaces every few years, but has intensified since the invasion of Ukraine, particularly in light of Russia’s military failures in recent months. Many of these speculative debates discuss either who will take the leadership position or what sort of regime – and led by who – will replace Putin at the top.

There’s a great deal of uncertainty about what a post-Putin Russia might look like. Projections range from violent destruction of the Russian state to the reestablishment of democratic norms and a system of substantive checks and balances – presumably under the “liberal” elite and technocracy.

There is a consensus among most of the Russian elite, including liberals (although it seems to be waning in recent times): there is no such thing as a truly post-Putin Russia. Putinism is so embedded in the country’s political, social and economic institutions and relationships that it’s almost impossible to imagine.

A realistic prognosis of a post-Putin Russia and succession plan must take this into account.

Putin most likely does not have a clear succession plan in place, other than the prescribed procedure which hands the presidency to the prime minister, Mikhail Mishustin, and calls for elections in the event of a premature departure of the current president. In other words, a voluntary change of leadership is unlikely to take place. Even if there were plans in place before the war, these are now likely to have changed with circumstance.

If there is a succession plan at all, it would be enacted after the war and post-conflict settlement. This implies that the regime will try to prolong the conflict for as long as politically and economically possible given the uncertainties and widespread problems that Russian military failures have introduced into the system.

So any speculation on leadership or regime change must take this into account. Several scenarios are possible regarding the outcome of the war.

In the fairly likely event of a stalemate and a return to frozen conflict in the east of Ukraine, the Kremlin would probably spin this as a Russian victory – even if there was a return to the pre-February lines, something which would be seen elsewhere as a failure. The state apparatus would blame the influx of western support as the major contributing factor, leaving room for regime elites to squabble among themselves.

This would be likely to result in increased pressure on the regime from both liberals and technocrats as well as the military and security elite (the siloviki). The state would have to mollify the disaffected elites or silence them. This system would result in increased elite autonomy and factionalism leading to prolonged infighting – and the siloviki would reap most of the benefits. We’re seeing this beginning to play out. For instance, two of Putin’s biggest supporters of the war – Chechen leader Ramzan Kadyrov and the leader of the mercenary Wagner Group, Yevgeniy Prigozhin – have come out in open attacks against the defence minister, Sergei Shoigu.

It’s less clear if Putin can maintain his status as an arbiter between elites in both the military and business spheres.

But a stalemate in Ukraine would also result in the continuation of the status quo of the type of electoral authoritarianism that has developed since 2012 when the regime tightened its grip on the electoral process and further rigged the playing field in its favour.

Putin would not seek a successor in the medium term and would continue to exert control over politics via his tried and tested electoral authoritarianism. But Putin’s power would be likely to decrease in the long term, leading to an unregulated succession with no obvious candidate to replace him. The siloviki would probably use the state apparatus to install an agreeable leader.

In this unlikely instance, which I envisage as decisive battlefield advances and control over annexed territory, competent managers in the technocracy and siloviki are given preferential treatment while liberals are largely excluded. As in the previous scenario, no immediate succession plan is on the cards for the foreseeable future. The regime fully consolidates into a hegemonic authoritarian regime under Putin.

A transition of power in this scenario would take place in the future and with similar conditions to the recent transitions in Central Asia such as the replacement of Nursultan Nazarbayev with his favoured candidate, Kassym-Jomart Tokayev in Kazakhstan. But Tokayev’s recent unrest and subsequent purges of Nazarbayev-era officials are still fresh in the memory of Putin’s regime. They have probably learned from the Nazarbayev’s missteps in those regards.

Both technocrats and siloviki have a strong footing in this potential regime. But a moderate, noncontroversial and controllable candidacy from the technocracy is preferable if Putin simply steps back but not out of power (for example, maintaining control over the budget, security and intelligence). Succession will be well regulated.

The power in this state would continue to flow through Putin rather than the executive. But a powerful siloviki faction would almost certainly try to “tighten the screws” and solidify the hegemonic regime after a transition.

This plausible scenario comes with the most uncertainty out of the three. The growing autonomy of the elite during the war will create the conditions for extreme factionalism: Siloviki v liberals and technocrats. Putin’s decisions will largely be irrelevant and an unregulated and sudden succession seems plausible for the short to medium term. This may take shape if Putin is forcibly removed or voluntarily removes himself from office.

Factional elites will compete for power, but it remains unclear how the process of selecting a new executive will unfold. The siloviki will have the impetus and capacity to seize higher positions but would come into conflict with the technocracy and liberals. In the case of a weakened pro-war bloc, the siloviki will face staunch opposition.

In the event of a leadership election – considering social discontent, and economic and political disruption – the silent liberals and technocrats would secure the necessary votes. Still, they would face opposition from the factional forces mentioned above. Russia would probably fall into a mishmash of Yeltsin-era instability and technocratic authoritarianism, where non-democratic technical interventions are required to maintain the new status quo.

Unfortunately, outside of Brandon Smith, there aren’t many conservative bloggers exposing how deep Russia (and China) are into marching in lockstep with western elites to create the NWO – and have been for generations. Mountains of evidence this is the case. This is why Putin privatized Russia’s oil and gas when the Saudis were doing the same for “Vision 2030” aka Agenda 2030. There’s also the background on how Skolkovo, Russia’s version of Silicon Valley and a formal UN SMART City, came to be spearheaded by western elites. Hillary Clinton as Secretary of State had American classified military technology transferred… Read more »

Putin is GRU…enough said. He’s the worst and most committed of all intel on the planet. Period.

This guy thinks Russia is losing?

There will be no Sodom and Gomorrah in Russia – ever, regardless of outcome.

Did we forget that Putin is KGB/GRU? Putin isn’t just an NWO stooge, he might as well be the whole NWO. You have to be completely impaired to not realize his agenda from his past. No, he wasn’t a communist. Really? Sure, but he didn’t want to be. Right, because GRU don’t have to prove their commitment. Look into it, stooges.

I know, Patrick thinks that we should debate the semantics of all of these oppressive systems, while “Rome” burns in the background.