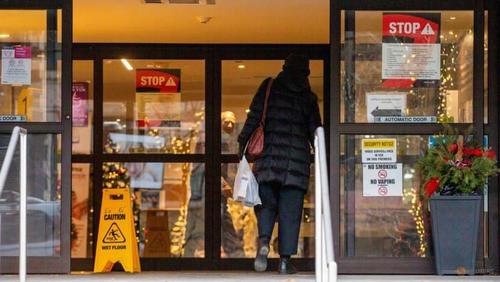 Please Share This Story!
PDF 📄
In Quebec, only 15 percent of the population has not received a COVID shot, and yet they are blamed for soaring infection rates among the vaccinated. Somehow that appears as logical to government leaders who are intent on punishing the holdouts. This is on top of closures of gyms, theaters and bars. ⁃ TN Editor

Quebec reimposed a nighttime curfew beginning New Year’s Eve as COVID-19 infections surged. Restaurants in the Canadian province only offer takeout service, while Gyms, bars, and movie theaters have been closed for days.

As the media and government drum up another COVID scare, Quebec Prime Minister Francois Legault wants to punish unvaccinated people for the soaring infections despite 85% of the residents in the province being vaccinated.

This week, Quebec Prime Minister Francois Legault is expected to announce more restrictive measures towards unvaccinated people, such as banning them from purchasing hard liquor and marijuana.

On Tuesday, the Journal de Montreal reported that “there was still some discussion to fine-tune the passport enforcement” at entrances or cash registers to block the unvaccinated from entering liquor and cannabis stores.

Vaccine passports have been required to access non-essential businesses such as theaters, bars and restaurants, casinos, conventions and conferences, places of worship, and sports facilities. If Legault goes ahead with the move, unvaccinated will only be able to purchase beer and wine.

“Time and time again, the government has said it does not intend to force officials to be vaccinated,” the local paper said. However, through indirect ways, it’s making life for the unvaccinated into a living hell, with an end goal to make them eventually concede and get jabbed.

What’s ironic is that the new vaccine requirement at liquor and cannabis stores will only apply to unvaccinated shoppers but not employees.

The fact that authorities in Quebec are using “totalitarian” methods to make the lives of unvaccinated people miserable and instill fear in the overall population as the less severe Omicron variant sweeps across the world is nothing short of disgusting.

The Canadian government has even admitted to launching a psychological operations campaign against their own people to manipulate them into vaccine compliance.

The use of fear by the government and corporate media has definitely been ethically questionable. On Sunday, a convoy of police rolled around Montreal with flashing lights and sirens telling people to go home or get fined for breaking curfew.

Montréal, Québec Canada.. welcome to the NWO.. citizens told to go home before curfew, those who resist will be fined $5000 to $6000. pic.twitter.com/4G3FoAJcnM

What’s happening is a pandemic power grab by elites who use mass formation psychosis to hypnotize the population through fear into being their subservient slaves.

“Quebec Curfew: Unvaxx’d Banned From Buying Booze, Marijuana” Well when alcohol was prohibited we ran stills or boubht White Lightning from someone in the underworld. For Marijuana, we bought it on the street or grew our oown. Also, it was all much cheaper when it was illegal. Making it legal was just a money maker for the government to be used to make you more managable. Never should have legalised any of it. And you thought it would make things better if you voted to legalize it when it actually made things much worse. Tell me. Who smokes and drinks… Read more »

Speakeasies might be fun.🥳
At least till cash is done away with 👹
Wonder what you can get for a pair of blue jeans or an Elvis record these days 😋

China’s Xi Government banned Public Smoking Houses of freedom after taking over Hong Kong. The innocent Chinese population cant even smoke on Sundays and meet true love.
The Chinese thus lost their smiles and now this.
A man who has survived on booze and marihuana his whole life has to be sober. I hate it.

One good thing I can say about being unemployed is that my days of paying taxes, bills and debts will be over should it come to that. I have no interest in missing out on temporal or eternal blessings to hang on to things that will be burned up with the earth (2 Peter 10-12). Neither do I have any desire to join the devil and his crowd in the lake of fire. I truly don’t mind being last in an unjust world in order to be first in The Kingdom Of God. Vain and empty promises or threats from… Read more »