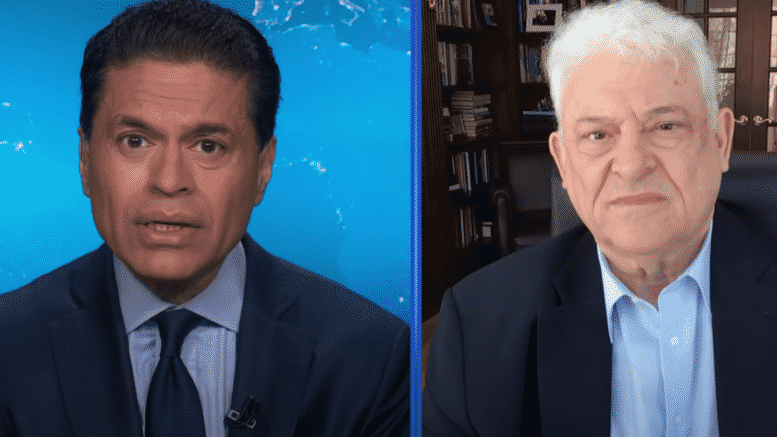 Please Share This Story!
PDF 📄
Propaganda is a one-sided and skewed presentation of the facts in order to manipulate people into doing things that they would never otherwise do if they had all the facts. Today, there is a massive propaganda campaign to establish vaccine passports and it’s coming from the very top of the Technocrat oligarchy.

Fareed Zakaria is a former member of the Trilateral Commission, having left after being busted twice for major plagiarism incidents. He is still a major voice for globalization and Trilateral policy, which is to drive the world into full-blown Technocracy. ⁃ TN Editor

In the first week of March, host Fareed Zakaria and his guest Arthur Caplan provided at CNN a textbook example of how to present vaccine passport propaganda to the American people. Let’s look at some of the major elements of the propaganda template as demonstrated by Zakaria and Caplan.

1) Include some short expression that the idea of vaccine passports can be troubling, but make sure to only bring this up superficially. This is accomplished in the CNN segment by starting with a clip from a short scene from the movie Casablanca. In the clip, a policeman asks to see a man’s “papers,” the man says he does not have them, and the policeman responds, “in that case we’ll have to ask you to come along.” Not shown is the remainder of the scene in which the accosted man, after presenting apparently expired papers, attempts to flee only to be gunned down. Not showing the full scene demonstrates the care demanded in the propaganda to not allow any depiction of potential dire consequences from imposing vaccine passports.

2) Frame the imposing of a vaccine passport mandate as something that is both inevitable and threatens only minimal, if any, harm. Zakaria accomplishes this task with the first sentence he utters to begin the media segment. Zakaria states: “From Casablanca to today, a demand to produce personal documents can be uncomfortable, but, post-pandemic, it’s something we’ll all likely have to get more and more comfortable with.” Masterfully, Zakaria, in addition to minimizing the problems with passports as just causing discomfort, asserts that even that discomfort with time will disappear, suggesting objecting to vaccine passports is just an irrational or silly reaction.

4) Reiterate that vaccine passports are inevitable, and that people should support them. Zakaria hits the nail on the head with this, presenting this first question to his guest: “So explain why you think, basically, that this is the future and we should be comfortable with it.”

5) Declare that vaccine passports must be imposed on the American people because of coronavirus. Caplan accomplishes this task in his first words in the media segment. He states: “Well, I’m sure that the future holds vaccine passports for us, partly to protect against the spread of Covid.” Of course, as coronavirus has turned out not to be a major danger to most people, imposing a vaccine passport mandate to counter it makes no more sense than doing it to counter any other of many diseases. But, this is not a topic to be brought up when selling people on vaccine passports. Fearmongering, no matter how ridiculously unjustified, is the name of the game. This is the fraudulent message people are encouraged to act on without much critical thought: Coronavirus is gonna kill us all unless we take the shots and show our papers!

6) Say that mandating vaccine passports is really no big deal because of some other supposedly very similar restriction to which some people are already subjected. Caplan states: “And, you know, it’s not a new idea, we have it for yellow fever; there are about more than a dozen countries that say you can’t come in if you haven’t been vaccinated against yellow fever, and many others require you to show proof of vaccination if you transit through those countries.” Are the yellow fever-related requirements justified? Caplan does not say more than that, because these somewhat similar restrictions exist someplace, the mandating of vaccine passports in America is fine. That’s medical ethicist reasoning? Anyway, the yellow fever stuff, because most Americans have no experience with or knowledge of it, is a fine example for the propaganda. Few watchers of the segment will have any basis for questioning the current practice that is used to justify the new desired mandate. One big difference, though, jumps out on further consideration. Caplan explains that the yellow fever requirements apply for just coming to several countries. In contrast, Zakaria early in the interview says the vaccine passports that will, he claims, inevitably be imposed on Americans will be required for people “to get on an airplane, to go to a concert, or to go back to work.” The vaccine passport mandate is, thus, much more troublesome for most Americans than yellow-fever-related requirements for entry into a few countries that most Americans never visit. But, the point is to quickly present the example as if it provides conclusive support no matter how far that representation is from the truth.

7) Dismiss as insignificant people’s concerns about being required, in order to go about their daily activities, to present a vaccine passport and to take a vaccine, or, really, an experimental coronavirus vaccine that is not even a vaccine under the normal meaning of the term. Assert instead that the only danger to freedom could be something theoretical that could be additionally required in the future. Here is how Zakaria puts it in a question to Caplan: “What about the concerns that many people have about privacy, about the privacy of their health data, that, you know, is there a slippery slope here — ‘OK, I’m comfortable telling you whether or not I have Covid, but does that mean it becomes OK to ask about other things?’” Of course, many people are justifiably wary of being pressured to take the shots and then having their mandated vaccine passport used to track them as they go about their daily activities. That is why this media segment and others like it are being presented, after all.

8) Dismiss any concern that vaccine passports can in fact harm freedom. Instead, describe people as benefiting from and gaining freedom by their being mandated to take experimental coronavirus vaccines and present vaccination passports in order to go about their daily activities. Oh yeah, and keep quiet about all the mass surveillance facilitated by a vaccine passport program, the vaccinations-based caste system resulting from the mandate that will make people who do not take the shots suffer, and how the vaccine passport program can be expanded to advance many additional types of control over people. Here is how Caplan puts it: “With a Covid certification, you’re going to gain freedom, you’re going to gain mobility, and I’m going to suggest that you’re probably going to be able to get certain jobs.” Talk about turning things on their head. The mandate really means that people who do not comply will be barred from the mobility they already have and fired from their jobs. Freedom is supported by rejecting the mandate, not by supporting it.

9) Insist that the vaccine passport mandate is fine because it will be applied equally to all people. This is something Zakaria and Caplan spend a long time talking about in the CNN segment. Come on guys, something bad does not become good because it is applied to the maximum number of people, irrespective of their race, sex, or whatever. We are dealing with a mandate here, not giving everyone a serving of his favorite dessert.

10) Declare that a vaccine passport mandate helps encourage people to take the shots. (Unlike the other nine elements of the vaccine passport mandate propaganda template, this one is likely true. Threats can yield compliance. Still, the threats could deter some people from taking the experimental coronavirus vaccine shots. It sure makes you wonder about shots’ supposed safety when an extreme, and unprecedented, act of force is employed to ensure people take the shots.) States Caplan in the interview: “It also gives you an incentive to overcome vaccine hesitancy. Some people are not sure still whether they want to do the vaccine, but if you promise them more mobility, more ability to get a job, more ability to get travel, that’s a very powerful incentive to actually achieve fuller vaccination.” What Caplan is really talking about is coercion. He is saying that people who would otherwise refuse taking the shots will be forced to do so by the vaccine passport mandate severely restricting their activities and even depriving them of the ability to earn an income so long as they do not give in to the demand they take the shots. All this authoritarianism is dressed up in deceptive language. “Vaccine hesitancy” is substituted for “vaccine refusal” to disguise that the vaccine passport mandate is about stopping people from exercising free choice. “Incentive” is substituted for “coercive technique.”

Hopefully, many people will see through the deception and be able to prevent the implementation of the vaccine passport mandate Zakaria, Caplan, and others are promoting in the media.

In what way can the above plans be described as not evil. The moral to the story – keep informed and keep yourself free from fear. I have re-published many Technocracy News articles. See daily developments as they happen. Brian. http://www.covid-unmasked.net