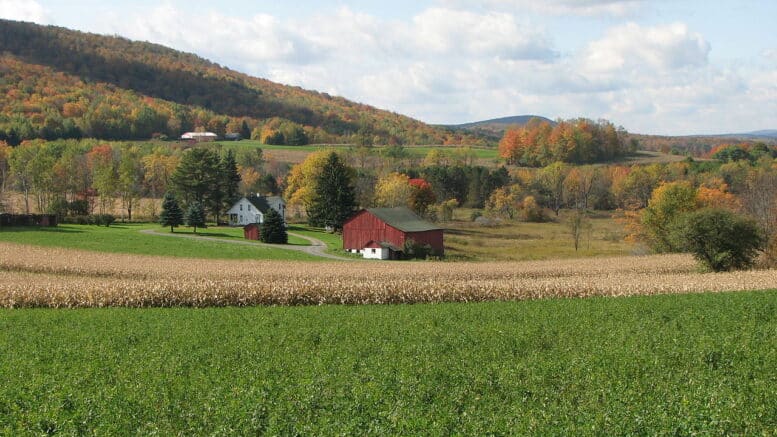 Please Share This Story!
PDF 📄
In 2014, China announced it was moving 100 million rural farmers off of their farms (permanently) and into cities, in order to make way for industrialized farming. Bill Gates has similar thoughts on the use of agricultural land, and has already amassed 242,000 acres of prime farmland. ⁃ TN Editor

Tech billionaire Bill Gates, co-founder and former CEO of Microsoft, may seem a strange fit for the role of America’s top farmer. But he’s been quietly amassing massive tracts of U.S. land under the cover of investment firm Cascade Investment LLC, and now owns a minimum of 242,000 acres of U.S. farmland.1

The finding was outed by Eric O’Keefe’s magazine, The Land Report, which puts out a list of the 100 biggest landowners in the U.S. each year. It was a 2020 purchase of 14,500 “prime” acres in Washington state that first caught O’Keefe’s attention, as he calls any sale of more than 1,000 acres “blue moon events.”

When he dug deeper, the purchaser of the 14,500 acres — in the heart of some of the most expensive acreage in America — was recorded as a small Louisiana company. “That immediately set off alarm bells,” O’Keefe told the New York Post.2 It turned out the company was acting on behalf of Cascade Investment for Bill Gates, and he owns land not only in Washington but also in Illinois, Iowa, Louisiana, California and multiple other states.

“Bill Gates, co-founder of Microsoft, has an alter ego,” O’Keefe wrote. “Farmer Bill, the guy who owns more farmland than anyone else in America.”3 Clearly Gates has a big vision for all that land, but unfortunately it doesn’t involve organic, biodynamic or regenerative farming methods, which are needed to heal ecosystems and produce truly sustainable, nourishing food for future generations.

Instead, the acreage seems earmarked for even more genetically engineered (GE) corn and soy crops — the base foods for what will become an increasingly synthetic, ultraprocessed food supply.

Imitation meat company Impossible Foods was co-funded by Google, Jeff Bezos and Bill Gates,4 and Gates has made it clear that he believes switching to synthetic beef is the solution to reducing methane emissions that come from animals raised on concentrated animal feeding operations (CAFOs).5

The strong recommendation to replace beef with fake meat is made in Gates’ book “How to Avoid a Climate Disaster: The Solutions We Have and the Breakthroughs We Need,” which was released in February 2021.6 In an interview with MIT Technology Review, he goes so far as to say that people’s behaviors should be changed to learn to like fake meat and, if that doesn’t work, regulations could do the trick.7

In the U.S., consumers are increasingly seeking out wholesome, real, minimally processed food. Fake meat like the Impossible Burger is the opposite — a highly processed fake food, but one that’s disguised as something good for you and the environment.

Where in nature can you find ingredients like genetically engineered yeast, soy protein concentrate, modified food starch and soy protein isolate? The answer is nowhere, and therein lies a key part of the problem.

However, Gates, along with Pat Brown, founder of Impossible Foods, believes that the “winning strategy” for the future of farming involves “finding ways for farmers to produce more corn and soybeans on every acre … while substantially lowering carbon emissions.”8 According to Fortune:9

“Surprisingly, both Gates and Brown believe that genetically modified seeds and chemical herbicides, in the right doses — and not land-intensive organic farming — are crucial to curbing carbon emissions.”

When animals are raised according to regenerative agriculture, a complete ecosystem is created, one that is both healing for the land and productive for the farmers who keep it. Eating meat is not synonymous with harming the environment; it’s industrial farming practices that inflict the damage. Some also believe eating meat means ripping out more forests so animals can graze, but often it’s grasslands and prairies that have been plowed up to plant a surplus of corn for ethanol.

U.S. cropland is already dominated by a two-crop planting cycle of corn and soybeans, largely for industrial animal feed. Like concentrated animal feeding operations, these chemical-laden monocrops are devastating the environment, and even though they’re plant foods, are part of the problem, not the solution.

Rather than reverting to regenerative agriculture, in which livestock and crops are integrated into a symbiotic, complementary system that mimics the way nature works, agrochemical companies like Syngenta are using gene editing, genetic engineering, chemicals and biologics to create hybrid seed lines, crops resistant to winds, flooding and droughts and other lab-created agricultural elements.

It’s all based on technology to advance seed and crop protections, in what’s referred to as “the new paradigm of farming.” If Gates has his way, organic will be pushed out of the picture. Fortune reported:10

“In an article from 2019, Brown wrote that Impossible was facing a shortage of soy because it relied on farms that didn’t use genetically modified seeds. The reason: Non-modified seed wasn’t nearly as resistant to disease, lowering output and forcing farmers to use far more herbicide.

Brown found that going with genetically modified crops provided both the extra supply he needed, and gave burgers the ‘beefy texture’ his fans craved. ‘The safest and most environmentally friendly option to allow us to scale up production and provide the Impossible Burger to consumers at the lowest possible cost is GM soy,’ he said.”

It’s an incredibly short-sighted statement, however, that completely ignores the many downsides of GM soy, which include devastating effects on insects like monarch butterflies as well as the promotion of herbicide-resistant superweeds.

Testing by Moms Across America also revealed the Impossible Burger contains glyphosate, the active ingredient in Roundup herbicide, which has been shown to alter the gene function of over 4,000 genes in the livers, kidneys and cause severe organ damage in rats at levels of just 0.1 part per billion.12 The Impossible Burger contained 11.3 ppb (glyphosate and its break down AMPA).

Biotech PR Campaign to Convince You to Eat Synthetic Food

U.S. Right to Know reporter Stacy Malkan tweeted in March 2021 that Bill Gates’ plans to remake our food systems are a problem for both farmers and consumers who don’t want to eat GE corn and soy that’s turned into processed, synthetic food products.13

Whether or not it’s “unpopular” doesn’t matter, though, as Gates said he thinks rich countries should be eating all fake meat. When asked whether he thinks plant-based and lab-grown meats could “be the full solution to the protein problem globally,” he says that, in middle- to above-income countries, yes, and that people can “get used to it”:14

The plan to get consumers used to replacing their burgers with synthetic, fake food has been underway since at least 2014, when a group of powerful agribusiness executives met to organize a PR campaign that would put synthetic biology and GMOs in a more favorable light. Dana Perls, from Friends of the Earth, attended the meeting and later wrote:15

“The meeting was under Chatham House rules — which means I can’t disclose who said what. However, I can say that the meeting was an alarming insight into the synthetic biology industry’s process of creating a sugar-coated media narrative to confuse the public, ignore the risks, and claim the mantle of ‘sustainability’ for potentially profitable new synthetic biology products.

Over the course of the day, primarily CEOs, directors and PR people from powerful chemical and synthetic biology companies, bounced around tales of promise, discussed how to position synthetic biology as a ‘solution’ to world hunger, and made blithe claims of safety that were not backed up by any actual data.

… When I asked how biotech companies will protect small farmers who are producing the truly natural products, I was met with a hard cold stare, silence and a non-answer about needing to meet consumer demand.”

In a recap of the key take-away points from the meeting, Perls said the industry’s PR strategy included not using the terms “synthetic biology” and “genetically engineered,” which have negative connotations, and trying to change the public narrative by capturing emotions and flooding the media with feel-good stories about synthetic biology.

The group agreed that the industry should remain self-regulated as much as possible, and that the results of corporate studies should not be public knowledge. They even suggested that the industry should present the image that they’re looking out for food sustainability, transparency and food sovereignty. But, Perls noted, “When I pointed out that corporate-controlled synthetic biology is the antithesis of ‘food sovereignty,’ I was met again with stony silence.”16