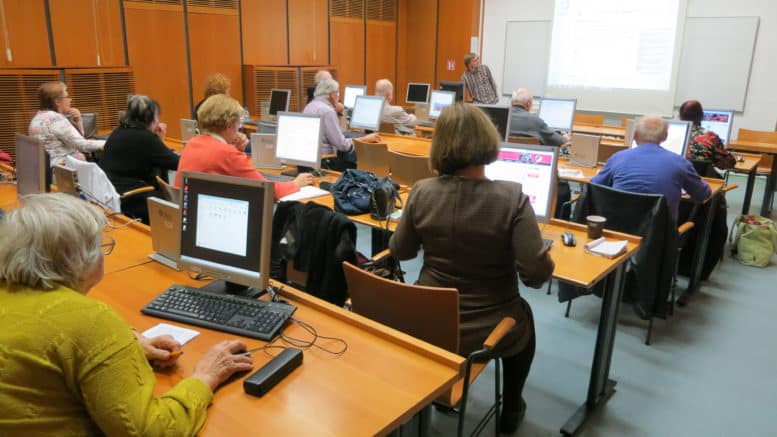 Please Share This Story!
PDF 📄
When the UN SDGs promise “lifelong learning experiences”, it means you will have to reinvent yourself multiple times in your lifetime in order to stay working. Your alternative will be to fall into a new class cynically called the “unemployables”.  ⁃ TN Editor

Looking at a map of California on a projector screen, Johannes Moenius, an economics professor at the University of Redlands, hovered his mouse over the Inland Empire, which glowed with a splotch of red pixels.

The colored dots signified how susceptible an area would be to job losses caused by automation. And the alarm-bell red that covered Riverside, San Bernardino and Ontario signaled high risk — roughly 63 percent of tasks performed by workers in the area could be automated in the future.

To Moenius, the rise of robots in warehouses, factories and fast-food restaurants presents danger for places like the Inland Empire, where most residents work in logistics and the service industry and just 21 percent of adults have four-year degrees. As technology transforms the nature of work in California, how do people most at risk find their way to new jobs?

“We’re facing a major challenge,” Moenius said. “If we don’t do anything, then it will turn into an apocalypse.”

Whether confronting an increasingly automated labor market or grappling with how the gig economy is reshaping the relationship between companies and their workers, California’s next governor will have to address the changing nature of work.

That could mean rethinking how to educate Californians, remaking labor laws or considering major social safety net proposals such as a universal basic income. State government might not be able to control change in the workplace, but it will have to deal with the fallout.

“If we don’t find a way to provide the skills and education and training necessary for the majority of Californians,” he said, “there’s going to be a lot more have-nots than we have today.”

California’s economy is booming. Its 4.2 percent unemployment rate is a record low. But experts warn the state’s labor market is particularly vulnerable to disruption from widespread automation.

“We are seeing a pretty high percentage of our workforce in relatively low-paying, low-skilled jobs,” said Somjita Mitra, director of the Institute of Applied Economics at the Los Angeles County Economic Development Corp.

Since the 2007-09 recession, the prospect of getting a well-paying job with just a high school diploma is dim.

“The challenge in the economy right now is that the kind of jobs that are being created are either at the lowest wages or the very highest wages,” Oakley said.

The rise of automation has sparked considerable angst among American workers. A 2017 Pew poll found that 72 percent of adults said they were worried about a future where robots and computers can perform human jobs.

But there’s no consensus on what the future will look like. One 2013 study, which Moenius used to build his analysis, estimated that 47 percent of American jobs were at risk of being automated. A 2016 paper put that figure at only 9 percent.

A study in 2017 posited that 23 percent to 44 percent of work hours in the United States will be automated by 2030 — particularly in jobs with a high degree of repetition such as machinists, office support and retail sales. But that study also said jobs would be added, especially among care providers such as surgeons, nurses, and construction workers.

Artificial intelligence — computers performing tasks typically done by humans — takes many forms. Computer vision, which allows machines to glean information visually, can be used in agriculture to give crops water and pesticides based on a plant’s needs.

Virtual assistants such as Siri or Alexa are being used in hotels, standing in for concierges or front desk assistants. Self-driving vehicles could upend the country’s transportation and logistics sectors, but it’s not clear how quickly those cars and trucks will be widely deployed.

“Depending on who you talk to, that’s a couple of years away or 30 years away,” said Stephen Baiter, executive director of the Oakland Workforce Development Board.

It’s one thing for a technological breakthrough to be invented, and it’s another to see businesses adopt that technology on a large scale. Experts predict that the impact on jobs will not be sudden, but more like a rolling wave.

The level of upheaval could vary by region. Moenius’ research found the Bay Area — home to Silicon Valley and highly educated workers — faces relatively low risk of job loss. The threat is higher in Fresno and Orange County.

But the area most susceptible to automation in California spans Riverside, San Bernardino and Ontario. According to Moenius, it is the fourth-most vulnerable metropolitan area in the nation, just behind other service-industry-heavy cities such as Las Vegas.

During World War II, the Inland Empire city of Fontana was home to Kaiser Steel, the Pacific Coast’s first steel mill, and was a crucial cog in the state’s vast shipbuilding industry.

But the steel jobs had withered by the 1980s — Fontana, like the rest of the region, became a bedroom community outside Los Angeles. It clawed its way back from the recession due in large part to warehouse and logistics jobs, and the service industry.

Now, on the campus of California Steel Industries Inc., the successor to Kaiser Steel, the Inland Empire is trying to reinvent itself again.

The Chaffey College Industrial Technical Learning Center, or InTech, is touted as the first public-private partnership in the state community college system. Originally envisioned as a place where companies could train workers for more advanced jobs, the program’s participants are now primarily unemployed or underemployed workers.

Training programs range from basic construction to more advanced skills like computer numerical control, which enables automated operation of machines. The center is run by local community colleges, but participants don’t earn college credits. Instead, they receive certifications based on input from local industry partners.

“Everything we do is designed by industry, for industry,” said Sandra Sisco, the center’s director.