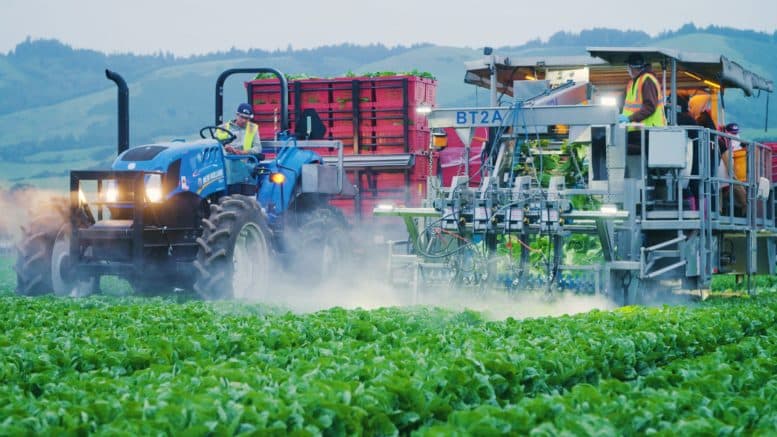 Please Share This Story!
PDF 📄
The rationale for immigrant workers has always been “we need them for jobs American’s won’t do.” Within 10 years, 90 percent of human labor on farms and will be replaced by robots. So, where are the 30 million illegal immigrants in the U.S. working these days? Certainly not on farms. ⁃ TN Editor

As a boy, Abel Montoya remembers his father arriving home from the lettuce fields each evening, the picture of exhaustion, mud caked knee-high on his trousers. “Dad wanted me to stay away from manual labor. He was keen for me to stick to the books,” Mr. Montoya said. So he did, and went to college.

Yet Mr. Montoya, a 28-year-old immigrant’s son, recently took a job at a lettuce-packing facility, where it is wet, loud, freezing — and much of the work is physically taxing, even mind-numbing.

Now, though, he can delegate some of the worst work to robots.

Mr. Montoya is among a new generation of farmworkers here at Taylor Farms, one of the world’s largest producers and sellers of fresh-cut vegetables, which recently unveiled a fleet of robots designed to replace humans — one of the agriculture industry’s latest answers to a diminishing supply of immigrant labor.

The smart machines can assemble 60 to 80 salad bags a minute, double the output of a worker.

Enlisting robots made sound economic sense, Taylor Farms officials said, for a company seeking to capitalize on Americans’ insatiable appetite for healthy fare at a time when it cannot recruit enough people to work in the fields or the factory.

A decade ago, people lined up by the hundreds for jobs at packing houses in California and Arizona during the lettuce season. No more.

“Our work force is getting older,” said Mark Borman, chief operating officer of Taylor Farms. “We aren’t attracting young people to our industry. We aren’t getting an influx of immigrants. How do we deal with that? Innovation.”

Moving up the technology ladder creates higher-skilled positions that can attract young people like Mr. Montoya, who is finishing a computer science degree, and bolster retention of veteran employees who receive new training to advance their careers.

“We are making better jobs that we hope appeal to a broader range of people,” Mr. Borman said.

In a 2017 survey of farmers by the California Farm Bureau Federation, 55 percent reported labor shortages, and the figure was nearly 70 percent for those who depend on seasonal workers. Wage increases in recent years have not compensated for the shortfall, growers said.

Strawberry operations in California, apple orchards in Washington and dairy farms across the country are struggling with the consequences of a shrinking, aging, foreign-born work force; a crackdown at the border; and the failure of Congress to agree on an immigration overhaul that could provide a more steady source of immigrant labor.

Farmhands who benefited from the last immigration amnesty, in 1986, are now in their 50s and represent just a fraction of today’s field workers. As fewer new immigrants have arrived to work in agriculture, the average age of farmworkers has climbed — to 38 in 2016, according to government data, compared with 31 in 2000.

This was foreseeable, even decades ago. The exponential rate of technological development clearly has pointed to better and better and better robotics. Yet we were told we needed illegals to put food on our tables.