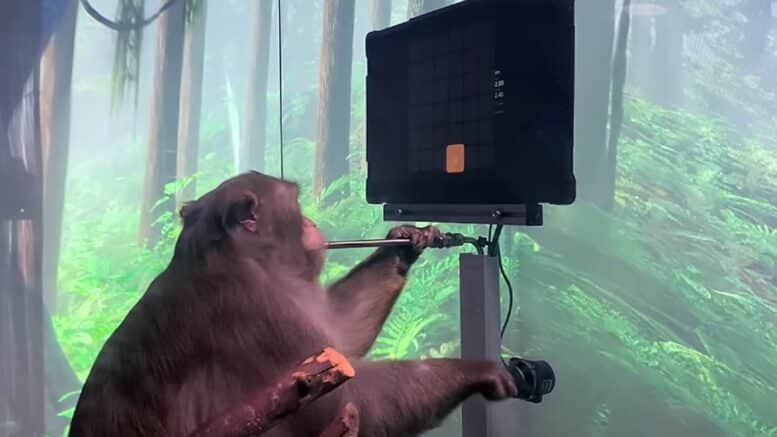 Please Share This Story!
PDF 📄
When Technocrats see no difference between humans, animals and inanimate material, there is no ethical boundary in mixing the three to see what might happen. This smacks of Transhumanism, which seeks to merge technology into human flesh in order to achieve immortality. ⁃ TN Editor

It’s been a big month for sci-fi primates. On Apr. 8, Elon Musk’s start-up Neuralink announced they created a cyborg monkey who can play MindPong using a brain chip. The following week, scientists at the Salk Institute in California revealed they successfully grew human-macaque embryos in test tubes. These hybrid babies were aborted at 20 days.

The ethical implications of such experiments are now debated with a resigned shrug. There’s a sense of inevitability to it all. Powerful humans will indulge in any behavior that’s both pleasurable and possible. What could be more pleasurable than playing God?

The practical question isn’t how to stop them, but how to survive in their technocratic age. Where do we draw such boundaries? Do we reflexively reject technology’s terms and conditions? Or, when it’s our turn to get chipped, do we take the plunge?

Ultimately, these are religious questions. Many traditional cultures view living beings as sacred. Each creature is endowed with a spark of consciousness and is therefore deserving of dignity, even those we kill and eat. From this standpoint, tinkering with the fundamental make-up of any living being is a form of blasphemy, especially in the case of humans.

For materialists — quite prevalent in Silicon Valley — an organism is only a collection of cells and chemical signals with nothing like a “soul.” In their self-conception, these innovators are simply joining Nature’s inexorable march from steam engines to smartphones to cyborgs, and beyond. Many of them view pain and suffering as mere brain signals on a flickering monitor. For them, the pleasure of advancement is a much higher priority.

Musk’s wired-up primate is being celebrated as a major breakthrough in cyborg technology. The overall system is fairly simple. Neuralink scientists trained a nine-year-old macaque, Pager, to play Pong and other puzzles on a computer screen using a joystick. Every time the monkey made a correct move, a metal tube squirted banana smoothie into his mouth.

All the while, Pager’s brain was being scanned by two Neuralink chips jabbed into his skull. More than 2,000 wires fanned out into his gray matter, monitoring his motor cortex as he wiggled the joystick and sucked down the banana smoothie. Once the monkey’s neural activity had been correlated with his actions onscreen, the researchers unplugged the joystick.

The cursor kept moving. The monkey was playing a video game with nothing but his brain waves. Maybe it’s just me, but it seemed like the cursor moved more smoothly when the Neuralink chip was being employed.

According to Musk’s declared ambitions, this breakthrough is just a stepping stone to inputting Neuralink chips into human skulls, thereby merging our cognition with artificial intelligence. In the hyper-competitive world looming just over the horizon — when AI has surpassed the human mind — getting a brain chip could be seen by many as merely a way to keep up in the rat race.

Neuralink’s monkey is just the latest chapter in a long history of animal-machine hybrids. Twenty years ago, Chicago’s Northwestern University revealed the first vertebrate cyborg. In that experiment, scientists cut a lamprey eel’s brain out of its head, kept the brain alive in a nutrient solution, hooked wires to its visual and motor cortices, and stuffed the sentient organ into a small machine the size of a hockey puck. There, the eel’s visual cortex was connected to light sensors and its motor cortex controlled the device’s wheels.

Researchers placed this fresh cyborg in a dark space. They flashed lights on one end of the chamber, and then on the other. Because lamprey eels orient themselves to light coming through the ocean’s surface, the brain-controlled hockey puck turned and moved toward the light wherever it shined. The creature buzzed back and forth, trying desperately to orient itself.

Two decades ago, publications like CNN and the Washington Post responded to such advances with suspicion and moral concern. Today, they chronicle the rise of technocracy with a mixture of awe and shameless product placement, if they cover it at all. Looking at Musk’s cyborg macaque, they see a bright future where the lame shall walk, the blind shall see, and the dumb shall think like superintelligent machines.

Planet Of the Human-Monkey Hybrids

On Apr. 15, Juan Carlos Izpisua Belmonte and his joint American-Chinese team at the Salk Institute announced the successful fertilization of human-macaque chimeras, a term derived from Greek mythology. In Homer’s “Iliad,” the chimera had a lion’s head, a serpent’s tail, and a goat’s body, and it breathed fire.

Today, we see myths becoming reality. Created in Promethean bio-labs around the world, “chimeras” are hybrid creatures whose stem cells derive from multiple species. This endeavor has been in progress for more than five decades. In that time, scientists have created viable rat/mouse hybrids, a scraggly sheep/goat, and a crippled quail/chicken, among others. More recently, the Salk Institute engineered pig hosts that grow healthy human lungs.

The way it works is simple. Lab techs take a fertilized embryo (like a macaque), then add the stem cells of another organism (like, say, a human being). They let the resulting entity gestate in vitro — or preferably, in utero — then stand back to watch the “magic” happen.

Among the weirder results is the blending of behavioral tendencies. One good example is a classic mouse hybrid. Scientists mixed the stem cells of a jittery species with a more docile variety. The behavior of the lab-grown offspring was somewhere in between.

We are rapidly entering the BABYLON 2 stage, where the abomination against humans were being carried out against Gods image of what it is to be human, and so He shut it down and caused it all to end and we had the Noah,the Ark and world flood to wipe away all this defiling of perfection, it looks as if we will have to go down this road again as these INSANES who think they are greater than God / NATURE or what ever you want to call the wonder of this connection everything has to each other on this… Read more »

Probably these things are being created for use by evil spirits in the near future.