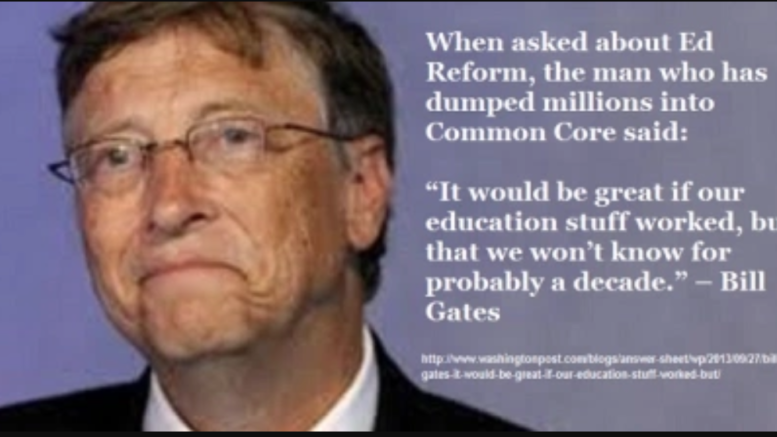 Please Share This Story!
PDF 📄
Common Core State Standards curriculum were created and owned by two private non-profit organizations, both of which were heavily funded and influenced by Bill Gates of vaccine fame. CCSS has failed miserably and an entire generation has been mentally crippled. ⁃ TN Editor

As we approach the 40th anniversary of the establishment of the United States Department of Education in May, shocking trends in student performance should lead us to reconsider the federal role in education and whether the initiative for policymaking should be returned to local schools, communities, and states.

Breaking with decades of slow improvement, U.S. reading and math scores on the National Assessment of Educational Progress (NAEP) and other assessments have seen historic declines since most states implemented national Common Core English and math curriculum standards six years ago, according to a new study published by Pioneer Institute.

While Common Core was promoted as improving the international competitiveness of U.S. students in math, our international standing has remained low while the skills of average and lower performing American students have dropped in both math and reading. 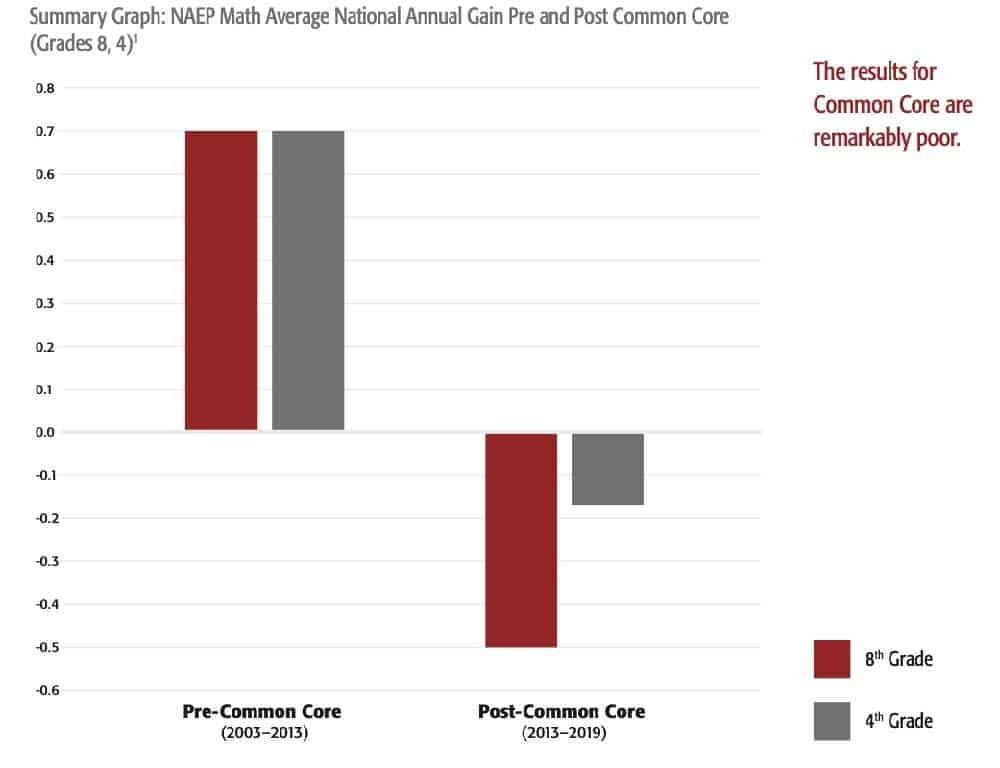 Nationally, fourth- and eighth-grade NAEP math scores were rising gradually in the years before Common Core was implemented (2003-2013).  Post-Common Core, scores at both grades have fallen, eighth grade at nearly the same rate as it was previously increasing.

The declines are most acute for the lowest-achieving students, increasing inequality.  Scores for students at the 90th percentile have mostly continued their pre-Common Core trend of gradual improvement. But the farther behind students were, the more substantial the declines, with the biggest drops occurring for those at the 25th and 10th percentiles.

U.S. students fare better in reading than they do in math when compared to international competitors, but U.S. reading trends are similar to those seen in math, with gradual pre-Common Core improvement replaced by declines after Common Core was implemented.

Rebarber also finds that Common Core is a product of the misguided progressive pedagogies and biases of the education establishment that developed it. “Several of us allied with Pioneer Institute have been pointing out, ever since it was introduced, the deeply flawed educational assumptions that permeate the Common Core and the many ways in which it is at odds with curriculum standards in top-achieving countries.”  Unfortunately, the disappointing results of Common Core—particularly for lower performing students—were predicted in 2010.

“Nearly a decade after states adopted Common Core, the empirical evidence makes it clear that these national standards have yielded underwhelming results for students,” said Pioneer Executive Director Jim Stergios. “The proponents of this expensive, legally questionable policy initiative have much to answer for.”

“It’s time for federal law to change to allow states as well as local school districts to try a broader range of approaches to reform,” added Rebarber.  “With a more bottom-up approach, more school systems will have the opportunity to choose curricula consistent with our international competitors and many decades of research on effective classroom teaching.”

Oh it worked alright! That was the purpose of Common Core to de-educated the youth! What these evil people say for good usually turns out for their evil intent. Now, look at who would be the leaders if all us old people died! This young generation has been led astray and I blame the parents! Yup, if they were alert themselves which they are not this would not have happened. They had their free baby sitters in the school system. Now’ they are all stuck at home together. Look how popular the Young Turks are!

Whilst it is fine to approach such subjects with a professional perspective – and I agree with all of the content of course – I believe that the time has now arrived to call a spade a spade as they neuter our brains. People really must stop writing articles as though all these ATTACKS on our education system, politics, financial institutions, governmental, private and public organizations – are somehow ORGANIC and the result of accidental or misguided decisions. THEY ARE NOT! Our nations, cultures, societies – and all of our natural human structures – have clearly been the subject of… Read more »

Its also the HEALTH of children and their “dumbing down” through processed foods and foods from Farming methods that are negative and the lack of MSM, Magnesium and so much more in the fruits and vegetables and the spraying of them, the oceans with their plastic and chemicals affecting the fish etc.,

Sorry you need to compare states that have common core verses those that don’t. you also need to normalize for the growth in Kids how come from Wedlock single parent families. We were already on the decline because of kids not having two parents. All Race related education differences can be explained by that one fact. It has only has grown in the last few years (Kids who are bastards). If it still shows a decline after I would be surprised. Chances are changes are its flat. I also don’t like a lot of Common Core.

Done deliberately. Youngsters who learn basic math and gramma can easily figure most of MSM campaigns and fake news.
AI and Digital Technocracy only need few mathematicians with fragmented and specialized knowledge. Pure economics by the Bankers and Oligarchs.