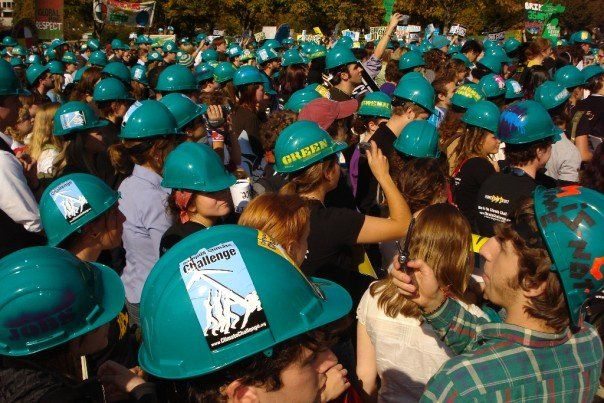 TN Note: The interviewee is Robert Pollin, a leftist economist and a supporter of egalitarianism. He founded the leftist Political Economy Research Institute (PERI) at the University of Massachusetts Amherst which “promotes human and ecological well-being through our original research.”

The initial focus of the interview concerns Pollin’s 2014 report “Green Growth: A U.S. Program For Controlling Climate Change and Expanding Job Opportunities.” This study was sponsored by the far-left Center for American Progress (CAP) that was originally founded by Trilateral Commission member John Podesta, with funds received from George Soros.

At the end of the interview, the interviewer asked “But how did you come up with the three times more number?” Listen to his answer:

“So, it’s government statistics. The U.S. government does surveys of business entities, public, private operations, and in the surveys they basically ask the business, what do you do when you turn on the lights? How do you produce the things you produce? How do you combine workers? What do you pay the workers? How much are you using in terms of equipment, machinery, buildings, land and so forth? That’s the raw material I’m working with. And then the government organizes that material into an extremely useful set of data called the Input Output model. So Inputs are basically referring to all the things that people do every day to produce things; and then the Outputs is the things they produce. When you use that table as a research tool you are able to get those ratios. The way I personally got into the research was exactly to address the question that you posed at the beginning, which is jobs versus the environment. Do we really have to think of it as that way? Of course everyone is concerned about protecting the environment. In particular, we have to care a whole lot about stabilizing the climate. So the question is, does that have to be done by sacrificing job opportunities? That really was my research question, and after many years of working on it, my answer is no.” [emphasis added]

So, he asked his question and then went off to justify it by whatever means. This is beyond just pedestrian academics, it is actually lying with statistics. Furthermore, he offers no evidence whatsoever to support his assertion, which should be a red flag in itself.

For decades, many conservatives in the U.S. have asserted that we can either have jobs or save the environment, but not both. But the green economy is gaining a foothold, mostly through the development of solar and wind energy production – as well as through the promotion of energy efficiency, which creates lots of jobs. Today the old economic argument that it’s jobs vs. the environment seems even more ridiculous, as more, and more jobs are being lost in the fossil fuel sector.

The last year the U.S. Bureau of Labor Statistics reported on the number of green jobs in the United States, they found that 3.1 million people were employed in green jobs in 2010, representing 2.4 percent of all jobs nationwide that year. By many accounts, that number increases substantially every year.

Between The Lines’ Melinda Tuhus spoke with Robert Pollin, distinguished professor of economics and co-director of the Political Economy Research Institute at the University of Massachusetts at Amherst. He has spent much of his career studying green jobs, and in 2014 was the primary author of a study commissioned by the Center for American Progress titled: “Green Growth: A U.S. Program for Controlling Climate Change and Expanding Job Opportunities.” Pollin’s research broke down many aspects of job creation in both the old and new energy economies and concluded that the green economy produces three times as many jobs than the fossil fuel energy economy does. Here, Pollin talks about his study and the urgency of addressing climate change.

ROBERT POLLIN: The CAP study really tries to do two big, big things, which is first of all to try to develop a program to drive CO2 emissions in the U.S. down by 40 percent as of 2030, and I try to show how this can be done realistically, number one. And then number two, that the project of accomplishing that is not going to be a burden on economic growth or job opportunities. To the contrary, it’s a positive source of job opportunities through investment in energy efficiency and renewal energy, which in my view are the two key features of any green economy program.

BETWEEN THE LINES: You know, people on the right have been saying for decades that it’s jobs versus the environment, which seems ridiculous. Do you think they say that because they’re in the pocket of the fossil fuel industry?

ROBERT POLLIN: Well, some of them are, but even if they are, you know, I’ve debated people like this and I don’t really care if they’re in the pocket, they still have to produce research and maybe their research is right. (Laughs) You know, I’ve dealt with their research on its own terms. You could say I’m in the pocket of the environmentalists or leftists, because I do get funded by different progressive groups and environmental groups. But the point is, we have to divide it into two pieces. There’s no question that jobs are going to be lost in the fossil fuel sector; that’s a given if we’re going to transition out of fossil fuels and into clean energy, by definition jobs are going to be lost in the fossil fuel sector. And that is an important question and actually something I’m working on now is developing what we could call a just transition program for people and communities who will be affected. So that’s one thing. And that’s a big driver. So you have politicians in coal country and so forth who are jumping up and down, and I understand their concern; it’s real. But the broader question is, when we do a transition out of fossil fuels and into the green economy, considering the economy as a whole, you will get many more jobs. My rough estimate is about three times more jobs per dollar of expenditure by building and maintaining a green energy economy as opposed to maintaining the fossil fuel economy. We know that by building the green economy – and by green economy I’m really talking about two things, renewables is one, and the other is efficiency. Of the two, the single most important to me is efficiency. Anyway, building the green economy is good for jobs.

Humans have a penchant to being overzealous in their personal prerogatives and will distort the truth to give more weight to their spiel. Their passions when unrestrained, generally creates more problems than it solves. The differences between the Left’s Green Agenda, and the Right’s fight against the control of their pursuits leaves many people emotionally reeling from a fight that has no real foundation. Just like the Global Warming / Climate Change debacle, It is proving that lying to get your way, never pays off.

Our youth have been so dumbed down by Goals 2000, Outcome Based Education, No Child Left Behind and Common Core, Technocrats, Global “Commons,” and this Invisible Government all done in secret. “Commons,” represents all of our natural resources, flora fauna, rivers, streams and wetlands. This is from the United Nations. In California, it seems to be good to dump water in the Pacific Ocean instead of giving it to the Farmers and Ranchers. People are so blind as to what is going on. The Media no longer stands for TRUTH! 1. Get rid of the Endangered Species Act and the… Read more »

Here’s the deal – The EPA says it takes 3 jobs/unit of green energy vs. 1/unit of fossil fuels – and believe it or not, they seem proud of that. Any businessman would say that’s just wrong-headed because you need to produce as many units as possible with fewer workers because it means lower expenses. But the government, as dense as they are thinks it’s a good deal. They also think it’s a good deal that these jobs pay more than those in the fossil fuel industry “The typical wage for someone employed in a clean energy industry—about $44,000—is 13… Read more »

Anybody that uses government statistics make a case is surely suffering the worst kind of delusion. Lies damned lies and statistics with the worst being the last.

Sorry, I meant “to make a case”