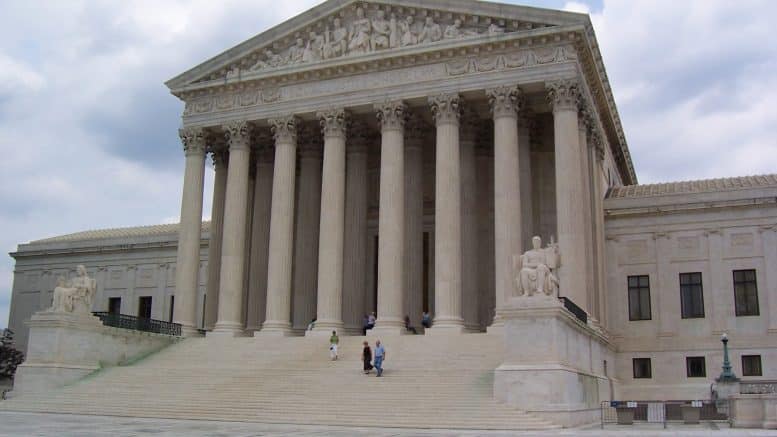 The Supreme Court will soon determine if a search warrant is required to access your cell phone tracking data held and owned by your cell service provider. It is a hot debate and critically important to the future of surveillance in the U.S. Technocrats want to track everything, everywhere, without legal constraints, and claim that for anything that leaves your phone, you have no expectation of privacy. This is bunk, and we can hope that the Supreme Court will uphold privacy laws in the digital age. ⁃ TN Editor

A case before the U.S. Supreme Court on Wednesday will tell a lot about how well the country’s privacy laws can protect people in the digital age. Carpenter v. United States specifically pits the privacy of information that wireless devices share with their service providers—the towers or “cell sites” devices connect to, the phone numbers they call and answer, and the time and length of those calls—against law enforcement’s authority to retrieve that data without a warrant.

Some background is helpful before diving into the case’s implications. In April 2011 the FBI in Detroit nabbed four suspects connected to a string of armed robberies at Radio Shack and (somewhat ironically) T-Mobile stores in Ohio and Michigan. One of the suspects later confessed and voluntarily turned over his cell phone so agents could review his calls. The FBI wanted more information about whom the suspect had been speaking to on his phone around the time the crimes were committed—but the bureau was unable to establish the probable cause it needed to get a search warrant for the info from his and his contacts’ wireless carriers.

However, federal magistrate judges determined the FBI had presented “reasonable” evidence that those records would be useful in its investigation, and they issued court orders under the 1986 Stored Communications Act (SCA) to compel the carriers to give the FBI that information. The main difference between a search warrant and the court orders used in Carpenter is that a warrant requires a higher threshold of proof that a government search will result in evidence related to a crime. The courts have decided that the government’s collection of cell-site records—created and maintained by defendants’ wireless carriers—is not a “search” under the Fourth Amendment, which protects the content of messages but not the metadata associated with their creation, movement and storage.

Without a warrant—but with the SCA court order in hand—the FBI compelled wireless carrier MetroPCS to provide about four months of location records for a smartphone owned by suspect Timothy Ivory Carpenter. The data identified the cell towers that handled calls to and from Carpenter’s phone. The FBI used that information to map 12,898 location points and determine the phone’s approximate location during the armed robberies—and found Carpenter had used his phone within a kilometer or so of several scenes at the time of the crimes, according to court records (pdf).

To get a signal so it can make or receive a call, a cell phone establishes a radio connection with a nearby tower called a cell site. As the user moves, the device constantly scans for nearby towers for the strongest signal. That interaction between cell sites and phones lets wireless carriers log and store details including a call’s date, time and length. Carriers also track the numbers involved, and the cell sites where a call began and ended. Prosecutors used information about Carpenter’s phone location and activity to help convict and sentence him to more than 116 years in federal prison, mostly over several gun violations.

Carpenter’s defense attorney Harold Gurewitz tried to get the lower courts to exclude information obtained from MetroPCS, arguing that the cell phone records could be seized only with a warrant supported by probable cause. Carpenter’s information was instead obtained in violation of the Fourth Amendment—which, among other things, protects people in the U.S. against “unreasonable searches and seizures”—Gurewitz said last week at a press briefing ahead of the Supreme Court hearing.