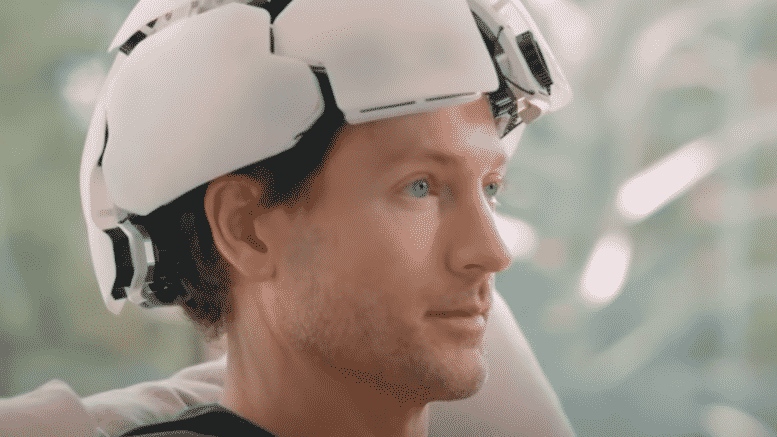 Please Share This Story!
PDF 📄
The developer says, “To make progress on all the fronts that we need to as a society, we have to bring the brain online.” This is a major Transhuman goal as well, to upload the brain into the cloud of immortality.  ⁃ TN Editor

Over the next few weeks, a company called Kernel will begin sending dozens of customers across the U.S. a $50,000 helmet that can, crudely speaking, read their mind. Weighing a couple of pounds each, the helmets contain nests of sensors and other electronics that measure and analyze a brain’s electrical impulses and blood flow at the speed of thought, providing a window into how the organ responds to the world. The basic technology has been around for years, but it’s usually found in room-size machines that can cost millions of dollars and require patients to sit still in a clinical setting.

The promise of a leagues-more-affordable technology that anyone can wear and walk around with is, well, mind-bending. Excited researchers anticipate using the helmets to gain insight into brain aging, mental disorders, concussions, strokes, and the mechanics behind previously metaphysical experiences such as meditation and psychedelic trips. “To make progress on all the fronts that we need to as a society, we have to bring the brain online,” says Bryan Johnson, who’s spent more than five years and raised about $110 million—half of it his own money—to develop the helmets.https://youtu.be/RswhkU4eaVA

Johnson is the chief executive officer of Kernel, a startup that’s trying to build and sell thousands, or even millions, of lightweight, relatively inexpensive helmets that have the oomph and precision needed for what neuroscientists, computer scientists, and electrical engineers have been trying to do for years: peer through the human skull outside of university or government labs. In what must be some kind of record for rejection, 228 investors passed on Johnson’s sales pitch, and the CEO, who made a fortune from his previous company in the payments industry, almost zeroed out his bank account last year to keep Kernel running. “We were two weeks away from missing payroll,” he says. Although Kernel’s tech still has much to prove, successful demonstrations, conducted shortly before Covid-19 spilled across the globe, convinced some of Johnson’s doubters that he has a shot at fulfilling his ambitions.

A core element of Johnson’s pitch is “Know thyself,” a phrase that harks back to ancient Greece, underscoring how little we’ve learned about our head since Plato. Scientists have built all manner of tests and machines to measure our heart, blood, and even DNA, but brain tests remain rare and expensive, sharply limiting our data on the organ that most defines us. “If you went to a cardiologist and they asked you how your heart feels, you would think they are crazy,” Johnson says. “You would ask them to measure your blood pressure and your cholesterol and all of that.”

The first Kernel helmets are headed to brain research institutions and, perhaps less nobly, companies that want to harness insights about how people think to shape their products. (Christof Koch, chief scientist at the Allen Institute for Brain Science in Seattle, calls Kernel’s devices “revolutionary.”) By 2030, Johnson says, he wants to bring down the price to the smartphone range and put a helmet in every American household—which starts to sound as if he’s pitching a panacea. The helmets, he says, will allow people to finally take their mental health seriously, to get along better, to examine the mental effects of the pandemic and even the root causes of American political polarization. If the Biden administration wanted to fund such research, Johnson says, he’d be more than happy to sell the feds a million helmets and get started: “Let’s do the largest brain study in history and try to unify ourselves and get back to a steady state.”