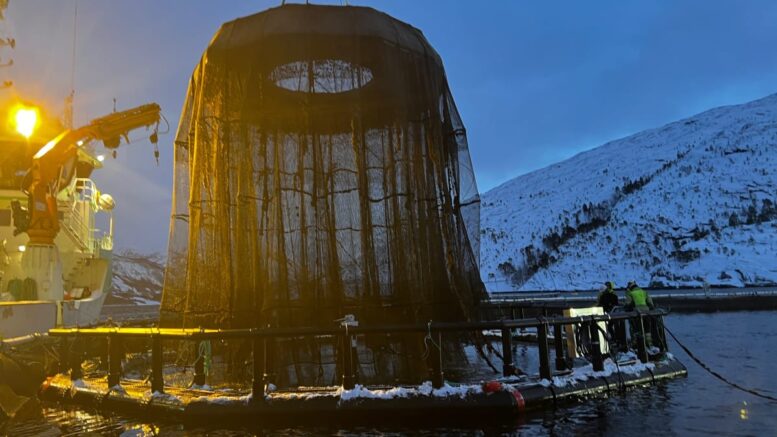 Please Share This Story!
PDF 📄
To understand the mind of a Technocrat, substitute the word “human” for “fish” in this press release, e.g., “which has resulted in important experiences regarding the camera arrangement, lighting, and data processing to enable a health record for each human, e.g., ‘Checking the humans in real time with cameras from multiple angles opens up to tell more about each human, but at the same time it requires a lot from the software and hardware solutions we develop.'”

Technocrats believe humans are no more than biological life forms equivalent to other species, resources to be managed by scientific endeavors.  ⁃ TN Editor

The results from the harvest show high quality of the iFarm fish, which confirms that the health and welfare of the fish has been good in the iFarm net pens. The very first iFarm fish was stocked in Martnesvika sea site in the autumn of 2020.

Using artificial intelligence and machine learning, Cermaq and BioSort aim to identify each individual fish in a pen and give individual follow-up and health journals. The iFarm project, which will develop individual aquaculture, is planned to run over five years. In phase 1, the main task has been adapting the iFarm equipment in the pen to the fish’s behavior and ensuring that the fish are well and have good welfare.

“The fish behavior we have observed in phase 1 tells us that the fish is doing fine with the iFarm equipment in the pen. This is further supported by the results from the harvest. The fish has had a good life in the iFarm pens,” says Cermaq’s iFarm project manager, Karl Fredrik Ottem.

The need for de-licing was reduced by 50% in the iFarm pens compared to the conventional pens on the site and scoring of welfare indicators was good throughout the production.

The iFarm project is a development project with a high degree of innovation, and with many uncertainties. The iFarm concept cannot be combined with ordinary underwater feeding equipment, and the harvest results showed that there is a need for further development of the underwater feeding system to achieve as good feeding factor as we normally have in Cermaq. The first production has also provided important experience in terms of solutions for integration between various main components of iFarm and how these should be further developed to improve handling operations and daily operations.

Also, the first version of the iFarm sensor has been tested in phase 1 in Martnesvika sea site, which has resulted in important experiences regarding the camera arrangement, lighting, and data processing to enable a health record for each fish. “Checking the fish in real time with cameras from multiple angles opens up to tell more about each fish, but at the same time it requires a lot from the software and hardware solutions we develop,” says general manager of BioSort, Geir Stang Hauge.

The further development of iFarm – phase 2 – is taking place in Vesterålen. An entire sea site has been equipped with iFarm setups in all the pens, after the fish was stocked last autumn. In this phase, there will be real full-scale testing of the concept and technology.

“We have learned a lot that we have already implemented in phase 2, and we have received a number of answers that take us to the next step. An important part of the innovation work is to find out what works and what does not work “, says Ottem.

The first iFarm fish was harvested at Steigen processing plant and has been sent to customers in Europe and Asia.

I just invisioned the fish swimming atound in these farms all saying to one another, “The science is settled, which way to the fish market so we can ve devoired.””

THIS IS SIMPLY ALL NARRATIVE NOT TOO UNLIKE THE “SAFE AND EFFECTIVE” VACCINE NARRATIVE…YOU CAN TELL MY THE WAY IT REPEATS AND RE-USES THE SAME WORDS…IT WAS MANUFACTURED NOT SOURCED FROM THE TRUTH AT ALL. THIS IS GOING TO BE THE SAME AS FACTORY FARMING AND RANCHING ONLY WORSE…JUST THINK “CAFO” AND MULTIPLY BY 10.