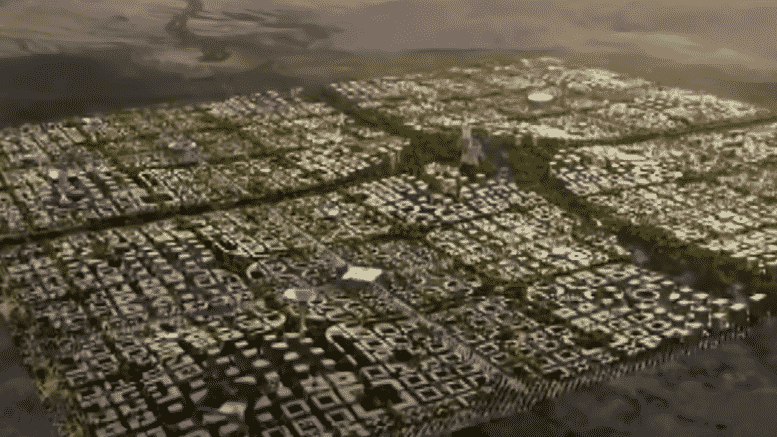 Please Share This Story!
PDF 📄
Utopia, aka Technocracy, by any other name is still Utopia and not one single attempt to built it has ever succeeded. Yet,  the billionaire class continue the myth by promoting new efforts on virtually ever continent on earth. Telosa is the latest iteration to build a city from the ground up to model their dreams. ⁃ TN Editor

One of the great myths of the modern age is that of the beneficent billionaire. The tale is simple and told in just two acts. In the first act these men and women rise from humble beginnings to amass inordinate amounts of wealth, power, and influence over society. Their second act begins when they are reborn as philanthropists whose only purpose in life is to save the planet.

This is the story of many of the world’s wealthiest individuals. Variations of it apply to the likes of Mark Zuckerberg, Bill Gates, Oprah Winfrey, Richard Branson, and Pierre Omidyar.

Joining their ranks is entrepreneur and former CEO of e-commerce at Walmart, Marc Lore. His first act is just like those of the other beneficent billionaires. Lore was just a normal kid from Staten Island who would go on to found and then sell several successful companies which already amassed him an enormous fortune before joining Walmart.

His second act is only just beginning. It was only this past January that Lore stepped down from his role at Walmart. In an interview given at the time he stated that he was moving on from the retail giant to commit himself to “a multi-decade project to build  a ‘city of the future’ supported by ‘a reformed version of capitalism.’” That city has now been given a name, Telosa.

Details of Lore’s plans to build the city and notions of what life in Telosa will look like are still relatively scarce. What is known is that over the next 40 years Telosa will grow to cover 150,000 acres and be home to 5 million people. This is approximately the size of Chicago with double the population. The first phase of construction, which would accommodate 50,000 residents across 1,500 acres, comes with an estimated cost of $25 billion and will be ready by 2030 (where have we seen that year before?) The whole project would be expected to exceed $400 billion.

Where the city will be built has yet to be determined but the project’s planners are eyeing the American desert. With states like Nevada welcoming plans for technocratic cities like Telosa by passing favorable legislature this is one obvious choice.

The city’s website is filled with buzzwords and marketing slogans meant to portray the plan as being for the betterment of mankind. Potential residents are told they can look forward to a city that “sets a global standard for urban living, expands human potential, and becomes a blueprint for future generations.” Words like “sustainable,” “equitable,” and “inclusive” are sprinkled throughout for good measure.

Many can already see past the slick veneer of the website and smooth marketing talking points, calling the idea for such city a greenwashed Vegas, the creation of which seems either impossible or simply disingenuous. To ridicule this planned city is a great start but what else is revealed in these plans if they are looked at not as the blueprint for the green inclusive city of the future but rather the enslaving technocratic Plannedopolis of our nightmares?

We won’t cover every detail but let’s scroll through the site and take a look at some of the highlights.

In Telosa, you will live where you work and you are always connected to nature. The women in the photos showcasing this lifestyle are both wearing virtual reality headsets signaling that wearable Internet of Bodies (IoB) devices will be key to working and connecting in the city. The trade-off could be the total end of bodily autonomy.

With fossil fuel cars banned the only way to get around will be autonomous vehicles. Despite the promise of open, fair, and inclusive governance what if there is a protest planned outside of the “Equitism tower” in the city center? Will the autonomous cars and copters still take passengers to the protest?

The city planners promise that every student will have access to the best teachers and resources. Yet, students are shown interacting with ipads rather than human beings. There is talk of “comprehensive training and skills upgrading programs” to continue education but the woman shown participating in said programs is wearing a virtual reality headset once again. This sounds much more like the “pay for success” model of education where investors shape curriculums and outcomes that researcher, Julianne Romanello warns about rather than a classical education meant to expand the mind. And there certainly doesn’t appear to be much human-to-human interaction in Telosa.

How do the planners Telosa plan to address the healthcare needs of its citizens? “All citizens will have access to local health clinics, healthcare technologies, and education on wellness and preventive care to improve quality of life,” they say. The stock image they chose to show alongside this slide is unsurprisingly a smartphone app showing the user’s “Heath Score.” One can only assume that this comes as part of whatever vaccine passport scheme would be rolled out in the city. The onlooker here is once again left wondering how much of life exists only through screens and virtual reality.

People of all incomes and backgrounds will have a diverse selection of housing to choose from. Images showcasing housing options in Telosa range from magnificent skyscrapers to ticky tacky suburbs to container pods. How this is any different from today’s world where the rich and powerful live in opulence compared to the bulk of society is not discussed.

One of the biggest promises made by the planners of Telosa is government accountability. All city meetings are open and accessible so citizens can easily and effectively participate in the decision making and budgeting process. But what happens if at one of these meetings residents criticism these decision makers? Will those in power just shut it down and walk away? If a resident’s Health Score is too low will they be allowed to participate?

The care of the environment is a top priority in Telosa. Efficient water use, renewable energy, and a flexible power grid are all part of the plan. The promise of “clear metrics and high standards to preserve our natural resources and open spaces,” is made to potential future residents. With the city planners controlling the use of all natural resources what’s to stop them from cutting off resources to any citizen they deem to have failed in their civic duties? Or shutting down public spaces should there be an outbreak of a virus? If water or another resource becomes scarce will it be rationed and if so to who?

These and many other questions about how Telosa will actually function need answers. More investigation into Marc Lore and his connections are also needed. For now however, we know enough to see a pattern unfolding where the beneficent billionaire is trying to come in and save the day. We know that these people have no love in their hearts for the masses. Why should we expect anything different this time?

If it works they would have to build a wall around it to keep out the same people they are letting into the United States.

PSYCHOPATHS!!!!……ALL of them! I don’t think that people understand REALITY, here. ALL of those mentioned (above), and many, MANY more of ‘these types’, did NOT EARN their wealth!! These individuals were SELECTED, by the ‘Top of the Pyramid Globalists’, and were CREATED (just like your FAKE life was CREATED FOR YOU, by them). Their wealth was GIVEN to them, by the Globalists, using OUR (people around the world) TAX $$$$$. EVIL Bill Gates, Oprah, et al are wealthy off of STOLEN $$$$$$ (Tax $$$). So….whatever it is that these individuals ‘OWN’, actually BELONGS TO US!!! Since it was purchased with… Read more »

How will citizens get to the Protests? Come on Matt – nobody will feel the need to protest, since this is Utopia. The AI enhancements will see to that.

With technology, out goes freedom. Will Telosa require vaxx’s? I discovered a few days ago, my Chevrolet Volt gives off more radiation than my body can withstand. How much radiation would there be in Telosa. More people with shorter lifespans. No thank you.

Sounds an awful lot like putting Native Americans on reservations doesn’t it? No water, worthless land – no thanks Marc Lore.

The idea of building a sustainable city in a desert is idiotic. If you have a choice, and they in theory would, why the heck would they build in an environment that could have water issues and be expensive to keep cool?

Interesting. Very interesting. They are looking at Nevada? What is the Deep State known for and prizes in Nevada and surrounding desert areas? DUMBS. Think about that.

Why? What’s inside those DUMBS? It’s a SECRET kept from the public, remember?

Telosa: A Technocratic City In The Making – David Icke