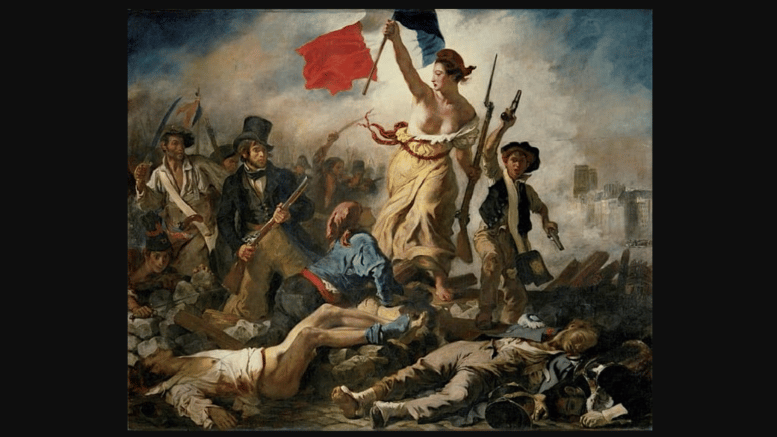 Posted By: Raúl Ilargi Meijer via The Automatic Earth August 26, 2022

Please Share This Story!
PDF 📄
There are tectonic rumblings throughout Europe and there is no clear outcome just yet. Leaders and borders may change. However, it is clear that there is an orchestrated plan to deconstruct the existing world order to prepare for the “new”, i.e., the WEF’s Great Reset, aka Technocracy. ⁃ TN Editor

As I read through the multitude of daily news articles about Russia, Ukraine, NATO and EU, it’s getting ever harder to escape the idea that there is a controlled demolition of the continent happening. And that neither its “leaders”, and certainly not its people, have any say in this. All we get from those “leaders” are NATO or World Economic Forum talking points. The only independent voice is Victor Orban. Who is either silenced in western media or painted as fully insane.

But Orban’s Hungarians won’t freeze this coming winter. He just signed a new gas deal with Russia. The main reason that is provided for all the others not doing that is of course Russia’s Special Military Operation in Ukraine. Which is as insane as Orban is, and “totally unprovoked”, say the western media. Noam Chomsky summarized that best: “Of course it was provoked. Otherwise they wouldn’t refer to it all the time as an unprovoked invasion.”

And no, it wasn’t just Russia/Ukraine, way before that Europe had already screwed up its economies beyond recognition -if you cared to look under the hood. But why make it worse? I get a very strong feeling that those EU “leaders” have alienated themselves far too much from the people they purport to serve, and they’ll regret it. For now it’s obvious among farmers, for instance, but when people start freezing, they will want to know why. And if no answer is forthcoming that is both honest and satisfactory, many “leaders” will have it coming for them.

The entire energy and food crisis is being sold as “inevitable”, but it is nothing of the kind. They are the result of choices being made in Brussels, Berlin, Amsterdam etc., about which nobody has asked your opinion. Something I jotted down a few days ago:

Is the west using Ukraine as an excuse to commit mass economic suicide? And, you know, fulfill some WEF-related goals? Why else would they cut off all economic ties to Moscow, at a time when it’s obvious they have no alternative sources for much of what they import from Russia? Moreover, why does a country like Holland aim to close 10,000 of its farms when it’s crystal clear that that will exacerbate the coming global food crises?

If you don’t like Putin, that’s fine, but why should your own people suffer from what you like or not? And of course you can ask whether it’s a good idea that a country the size of a postage stamp is the world’s no. 2 food exporter. But it is. And if you try to change that by doing a 180º, also on a postage stamp, it is very obvious that is not going to go well. And all the so-called leaders know this. But they still do it.

Prices for heating, petrol, as well as food, are set to go much higher than they have already, mitigated only -perhaps- by the fact that ever fewer people will be able to afford the ever higher prices. But now it’s starting to look like this was all scripted. Because “we” could have kept communication channels with Russia open, “we” could have negotiated for peace for the past 6 months. Not doing that was a deliberate choice. A choice that you and me, another “we”- had no voice in whatsoever.

The Dutch could have negotiated with their farmers, and slowly addressed their perceived problems with nitrogen oxides, while keeping food production going. And we could have found a way to keep Russian and Ukrainian crops available on world markets too. But it doesn’t feel at all like “we” wanted that.

And that’s not all. Fertilizer!! Why they do it, I don’t know. Do they WANT to kill their own economies? It makes no sense. And this will not be over soon.

Reuters of course seeks to blame Putin. But he’s not the one who introduced the sanctions. He’s offered to let the gas and oil exports continue.

Cold winters helped Moscow defeat Napoleon and Hitler. President Vladimir Putin is now betting that sky-rocketing energy prices and possible shortages this winter will persuade Europe to strong arm Ukraine into a truce — on Russia’s terms. That, say two Russian sources familiar with Kremlin thinking, is the only path to peace that Moscow sees, given Kyiv says it will not negotiate until Russia leaves all of Ukraine

“We have time, we can wait,” said one source close to the Russian authorities, who declined to be named because they are not authorised to speak to the media. “It’s going to be a difficult winter for Europeans. We could see protests, unrest. Some European leaders might think twice about continuing to support Ukraine and think it’s time for a deal.”

EU foreign policy chief Josep Borrell wants Europeans to be obedient little critters, and take the punishment for the policies he and his ilk have carved out. Because “we” are destined to win. Mr. Borrell is planing to do just fine this winter, mind you. With the best steak your money can buy, real fine wine, to be consumed in comfortably heated homes, restaurants and offices. A picture of Marie Antoinette pops up in my brain.

EU high representative and foreign policy chief Josep Borrell gave a surprisingly blunt assessment of the Ukraine war and Europe’s precarious position in an AFP interview published Tuesday, admitting that Russian President Vladimir Putin is betting on fracturing a united EU response amid the current crisis situation of soaring prices and energy extreme uncertainty headed into a long winter. Borrell’s words seemed to come close to admitting that Putin’s tactic is working on some level, or at least will indeed chip away at European resolve in the short and long run, given he chose words like EU populations having to “endure” the deep economic pain and severe energy crunch. He cited the “weariness” of Europeans while calling on leadership as well as the common people to “bear the consequences” with continued resolve.

Borrell explained to AFP that Putin sees “the weariness of the Europeans and the reluctance of their citizens to bear the consequences of support for Ukraine.” But Borrell suggested that Europe will not back down no matter the leverage Moscow might have, particularly when it comes to ‘weaponization of energy’ – and called on citizens to continue to shoulder the cost. Who will blink first? …appears to be the subtext here. He urged: “We will have to endure, spread the costs within the EU,” Borrell told AFP, warning that keeping the 27 member states together was a task to be carried out “day by day.”

And yet, as some like Hungary’s Viktor Orbán have consistently argued since near the start of the Feb.24 invasion, it is inevitable that some will be forced to bear the “costs” much more than others. Already this is being seen with initiatives out of Brussels like rationing gas consumption, which has further led to scenarios like German towns and even residences being mandated to switch off lights or resources for designated periods at night. “More cold showers” – many are also being told. As we round the corner of fall and enter the more frigid months, we are likely to only see more headlines like this: “German cities impose cold showers and turn off lights amid Russian gas crisis.”

Talking of Marie Antoinette. Emmanuel Macron is the little man of grand vision. He foresees the ‘End Of Abundance’, a veritable “tipping point” in history. And he’s just the man to lead you through it. I’ll give him this: he’s got good speech writers. But speech writers don’t keep the people warm and fed.

The Controlled Demolition Of Europe – Life, Death and all between

[…] The Controlled Demolition Of Europe […]

I am European. I am 33 years old and I have been researching since I was 17 years old everything that this website has been exposing for years as well. Despite being intellectually prepared for all this… despite seeing it coming little by little… despite all that, when it comes, you are not prepared. There’s resource rationing going on, and a lot of Europeans will probably freeze to death this winter… unless the States intervene heavily, and we know what that really means… DICTATORSHIP. Security in exchange for freedom, right? I am terrified. So here’s the only contribution I can… Read more »

[…] The Controlled Demolition Of Europe […]

Nothing so complex, The Financial Powers of the NWO in the EU use Ukraine as a pawn to get at Moscow. They financially bluffed the Russians with sanctions & the Russians called their bluff by rolling out a Commodities based financial system led by gold! This new financial rival will destroy the London/Brussels bankers & their debt based system of fiat paper currency! This is what western Europe has left after WW2 & the loss of colonies they had formerly lived off of! They were temporarily saved by the Bretton Woods arrangement in 1944 Piggy Backing on the US Dollar… Read more »

You can tickle someone and they respond by cutting you in half. You can’t say it wasn’t provoked. This guy is a shill, of course. But the dumbness of it! Anyway, shout out to everyone who can’t imagine what a war zone is like and thinks this is all somehow a job for “logic”.