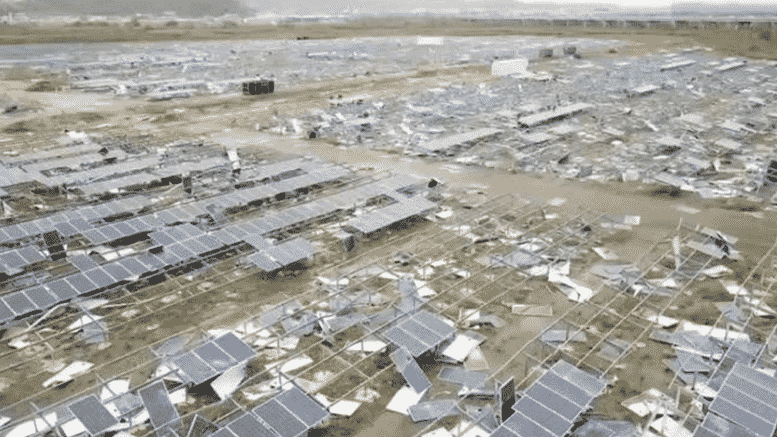 Solar Generation after a Storm in Puerto Rico

Please Share This Story!
PDF 📄
Of course, California vehemently denies that their alternative energy policies and/or installations have anything to do with rolling blackouts or brownouts this summer. However, anybody with half a brain can immediately connect the dots surrounding California’s failing energy policy. The only obvious remedy is to reverse course while there is still a viable state to do so. ⁃ TN Editor

California leads the way to electricity blackouts, closely followed by South Australia.They both created this problem by taxing, banning, delaying or demolishing reliable coal, nuclear, gas or hydro generators while subsidising and promoting unreliable electricity from the sickly green twins – solar and wind. All supposed to solve a global warming crisis that exists only in academic computer models.

Energy policy should be driven by proven reliability, efficiency and cost, not by green politics.

Wind and solar will always be prone to blackouts for three reasons.

Firstly they are intermittent, producing zero power when winds drops or sunlight fails.

Secondly, green energy is dilute so the collection area must be huge. Both solar panels and wind turbines are old technologies and now close to collecting the maximum energy from a given land area of wind and sun, so limited technology gains are possible. Wind turbines generate nothing from gentle breezes and must shut down in gales. To collect more energy the green twins must collect from greater areas using a widespread scatter of panels and towers connected by a fragile network of roads and transmission lines. This expensive, extensive but flimsy system is far more susceptible to damage from cyclones, hail, snow, lightning, bushfire, flood and sabotage than a big, well-built, centrally-located, well-maintained traditional power station with strong walls, a roof and lightning protection. Green energy also requires far more investment in transmission lines and inter-connectors that consumers must pay for, and the energy transmission losses are greater.

Thirdly, green energy is like a virus in a distribution network.

When the sun shines, solar energy floods the network, causing energy prices to plummet. Coal and gas plants are forced to operate at a cash loss or shut down. Erratic winds make this problem worse as they are less predictable and changes can be quicker. But when all green energy fails suddenly, like in an evening peak demand period after a still cold sunset, coal cannot ramp up quickly unless it has been kept on standby with boilers hot, waiting for an opportunity to generate some positive cash flow. Gas and hydro can fire up swiftly but who wants to own/build/maintain an expensive fair-dinkum power station that operates intermittently?

Currently hydro, or stop-start gas turbines on standby, or coal generators fired up but not generating are keeping Australian lights on during green energy blackouts. But no one will build new reliable generators to operate part-time. Soon we will have day-time where there is heaps of electricity producing no profit for any generator, and night-time when electricity prices will soar and blackouts will threaten.

Authorities have their solution – rationing. They will use a blackout crisis to grab the power to dictate rolling blackouts of whole suburbs, areas or factories or selective consumer blackouts using smart meters.

There are many contestants in the battery growth “industry” including pumped hydro, lithium batteries, compressed air, big flywheels, hydrogen storage, capacitors and molten salt. They all need to be able to cope with a few days without wind-solar, which makes them huge and expensive. And all are net consumers of energy as they go through the charge/discharge cycle.

Half-tonne Li/Co/Pb batteries are huge consumers of energy – energy for exploring/mining/refining metals and for concrete, battery manufacture, transport and construction; energy to charge them and absorb the inevitable losses in the charge/discharge cycle; energy to build battery warehouses and finally energy to recycle/bury worn-out batteries (which wear out far quicker than coal, gas, hydro or nuclear power stations).

But a solar system also needs to be able to cope with up to 7 days of cloudy weather. This needs 7 times more batteries plus the generating capacity to charge them.

No matter whether the battery is stored hydrogen or pumped hydro, the cost to stabilise 100% green energy would be prohibitively expensive. Before we leap over this green cliff, those who claim otherwise must be obliged to demonstrate a working pilot plant without coal, gas or diesel.

Wind power suffers the same problems but is far less predictable. Wind droughts are a common feature. At times wind turbines drain electricity from the grid.

To maintain grid stability, the generators must charge batteries which can then supply a steady stream of electricity to the grid. This requires many more transmission lines and battery connections.

At this point the maths/costs of zero-emissions with 100% solar/wind become preposterous. And the ecological disruption becomes enormous.

When Danish windmills stand silent, they import hydro power from Scandinavia. When German solar panels are covered in snow, they import nuclear electricity from France. And California can draw power from Canada.

But Australia is an island. When the grid fails, Tasmanian hydro or New Zealand geo-thermal are the closest reliable-energy neighbours.

The looming Covid Depression has no room for more green energy silliness. We cannot afford to mollycoddle an aging failing technology. A hard dangerous new world is coming. To survive we will need cheap reliable energy – coal, gas, nuclear or hydro.

Actually in 2018 we had a hot summer with little or no wind for 3 months and a lot of the electricity came from german coal powered plants.