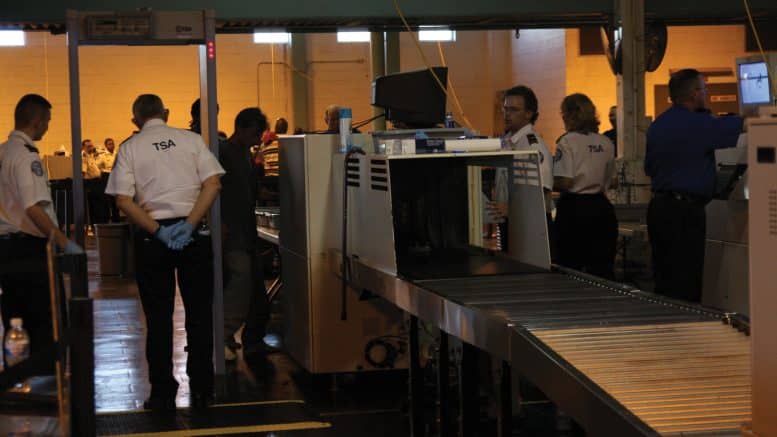 The TSA has long since gone rogue against American citizens, but no-fly lists were apparently not enough. The secret list of anyone who resists or smart-mouths them is nothing short of a police-state in action. ⁃ TN Editor

“I need a witness!” exclaimed the security screener at Ronald Reagan Washington National Airport. Because I had forgotten to remove my belt before going through a scanner, he explained, I must undergo an “enhanced patdown.” I told him that if he jammed his hand into my groin, I’d file a formal complaint. So he summoned his supervisor to keep an eye on the proceedings.

I thought of this exchange last week when the New York Times revealed that the Transportation Security Administration has created a secret watchlist for troublesome passengers. The TSA justified the list by saying that its screeners were assaulted 34 times last year, but did not release any details about the alleged assaults.

Naturally, the TSA’s official definition of troublemaking goes well beyond punching its officers. According to a confidential memo, any behavior that is “offensive and without legal justification” can land a traveler on the list, as can any “challenges to the safe and effective completion of screening.” Anyone who has ever “loitered” near a checkpoint could also make the list. So could any woman who pushes a screener’s hands away from her breasts.

The memo would be more accurate if it stated that anyone who fails to unquestioningly submit to all the TSA’s demands would be found guilty of insubordination. As an attorney for the American Civil Liberties Union, Hugh Handeyside, told the Washington Post, the policy gives the agency wide latitude to “blacklist people arbitrarily and essentially punish them for asserting their rights.” Rep. Bonnie Watson Coleman (D-New Jersey) expressed similar worry. “I am concerned about the civil-liberty implications of such a list,” she said.

The watchlist would seem less perilous if the TSA were not one of most incompetent agencies on Earth. After a series of undercover tests at multiple airports across the country, the Department of Homeland Security concluded last year that TSA officers and equipment had failed to detect mock threats roughly 80% of the time. (In Minneapolis, an undercover team succeeded in smuggling weapons and mock bombs past airport screeners 95% of the time.) An earlier DHS investigation found the TSA utterly unable to detect weapons, fake explosives and other contraband, regardless of how extensive its pat-downs were.

According to the TSA, travelers can take consolation in the certainty that its agents will never assault them. But Americans have filed thousands of complaints that suggest otherwise, claiming screeners used excessive force or inappropriately touched them. How many have been fired as a result? It’s hard to say: When I asked the TSA, they told me to file a Freedom of Information Act request.