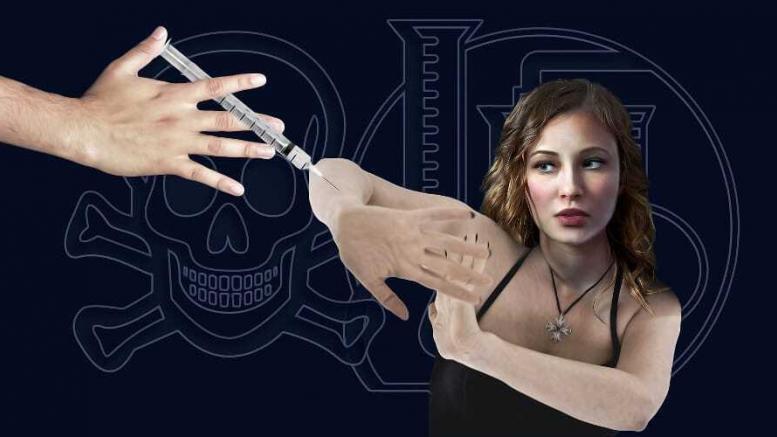 Please Share This Story!
PDF 📄
When genetic scientists decided to recklessly meddle with the human immune system, the aftermath of the first round of gene therapy jabs guaranteed only one thing: ongoing direct access to humans for an unending series of additional gene therapy shots. For those who died as a result, no apologies will be forthcoming. ⁃ TN Editor

The next big wave of COVID infections, already hitting states such as Michigan, will be dominated by people who have been fully vaccinated.

This was predicted by the authors of a scientific study published in a British medical journal.

Between 60 and 70 percent of “third wave” COVID deaths and hospitalizations will be from people who were fully vaccinated, according to the study, Summary of Further Modeling of Easing Restrictions, published March 31 by the London School of Hygiene & Tropical Medicine.

This may at least partially explain why Detroit-area hospitals are filling up with COVID patients.

But you won’t read about this angle to the story from anyone in the mainstream media. They are reporting the story as simply a new wave of COVID hospitalizations and deaths caused by a UK-based variant of the virus that has nothing to do with the high rate of vaccinations. [See Detroit News, April 15, 2021, Beaumont nears COVID hospital capacity as experts warn of ‘new pandemic.’]

Mainstream news outlets have yet to express the tiniest bit of curiosity as to why the big spike in COVID is taking place even as large percentages of the public have been vaccinated [Michigan is one of the most-vaccinated states in the nation with nearly 30 percent of Michiganders receiving the jab]. In fact, health officials quoted in the above Detroit News article are blaming “vaccine hesitancy” for the new wave, a diabolical falsification of what’s going on in Michigan meant to put more pressure on the people who refuse the unproven experimental injection.

“The resurgence in both hospitalizations and deaths is dominated by those that have received two doses of the vaccine, comprising around 60% and 70% of the wave respectively. This can be attributed to the high levels of uptake in the most at-risk age
groups, such that immunization failures account for more serious illness than unvaccinated individuals.” [See page 10, summary point No. 32].

And what do the British scientists who authored the study say is the answer to this dilemma of the fully vaccinated coming down with COVID? Why, more vaccines and more lockdowns, of course!

And Big Pharma is more than happy to comply. Pfizer CEO Albert Bourla announced a “third dose” of its vaccine will be needed within 12 months of the second dose and likely another dose every year after that. As we predicted, the globalists planned all along to use COVID to scare people into getting annual injections. Nobody knows what’s in these injections or how they will affect human health in the medium and long term.

The scenario taking shape is beginning to look like the one Dr. Geert Vanden Bossche warned us about in early March. Based on his years of experience in the vaccine industry, Vanden Bossche called for a halt to the mass vaccination programs being conducted “in the middle of a pandemic.” He said that if the jabs were not halted they would lead to the creation of stronger and stronger variants of the virus until a “super virus” takes hold and wipes out huge numbers of people. [See Top vaccine expert calls for global moratorium on COVID injections, LeoHohmann.com, March 17, 2021]

Speaking to ChurchMilitant.com, academic and mental-health ethicist Niall McCrae noted that “the report’s prediction that 70% of COVID-19 deaths will be of dual-vaccinated people is quite startling.”

“Clearly these pseudo-scientific modelers would like us to be locked down ad infinitum, but do they know something that governments and public health authorities aren’t telling us?” Dr. McCrae asked.

The academic slammed the study’s “Alice-in-Wonderland logic, ‘following the science’ down a rabbit hole” since “the report states, ‘this is because vaccine uptake has been so high in the oldest age groups,’ and that ‘this is not the result of vaccines being ineffective, merely uptake being so high.’”

“We already know that for two to three weeks after the injection, elderly and vulnerable people are at increased risk of serious respiratory infection, due to lowering of immunity. That’s why there was a surge in deaths after vaccination rollout, with the evidence most stark in countries with the highest vaccination numbers; such as Hungary, Israel, Serbia, Gibraltar and the United Arab Emirates.”

Even more concerning is the report’s warning of a longer-term risk to the vaccinated. Will they be more prone to COVID-19 variants or to other viruses, as Vanden Bossche suggested?

“In the old joke when someone asks an Irishman for directions, and he says, ‘I wouldn’t start from here,’ I fear for those who took the jab and thought that the road ahead would be safe and straightforward.”

ALERT:
Disturbing – I’m sure this is NOT just Australia 😳

There is a great deal of questioning as to what exactly Geert Bossche is setting a table for. Yeadon a former VP at Pfiser, who also should held with suspicion, has stated that Bossche’s theory of ‘gain of function’ because of these shots is full of crap as any variant will be in the 97% or greater range identical to the original SARS 2 and the immune system would deal with a variant just as it does with the original. Yeadon sees the actual injection products themselves as the problem and now the public is beginning to get wind that… Read more »

it sounds like the necessity to trace vaccinated is essential. And since so many deaths AFTER the injections still didn’t manage to stop the experimental auschwitz-style genocide, maybe, as terrible as it sounds, the deaths of the vaccinated in larger amount will be the turning point to stop this crime? Unfortunately the reports are piling up saying the injected are ‘somehow’ affecting the non-vaccinated. Why people do not get together with massive lawsuits against the establishment?

There are massive lawsuits, see Childrens Health Defence and ICAN or Highwire. Also here in The Netherlands with actions like Viruswaanzin, see also Cafe Welschmertz. It’s coming more out in the open that the courts have been corrupted just like main-stream-media has. That is why the only way out is pulling together as people, as we are way bigger in number. But we need to act fast before it’s too late. Once this thing gets a hold as in when the corona bullshit passports are implemented, it will be extremely difficult to turn this around, if not impossible????? help. I… Read more »

remember, these companies are IMMUNE to prosecution. NOTHING will EVER happen to them. EVER.

I really wouldn’t doubt it…population control and they don’t care how they get there.

If their modelling is as good as Neil Ferguson’s then its all b******s.

Van Bossche only feed the erroneous idea that new variants can be dangerous, something that renowned epidemiologists like Dr Sucharit Bhakdi refuted. People are and will die for m the jab, not from ‘variants’! How could it be a variant if C19 doesn’t even exist??? Bossche not once debunked the c19 fraud, he just kept promoting vaccines.
I find puzzling how people give any attention to people like Bossche…is it only because he was interviewed by Dell BigTree? I also find puzzling this huge mistake by BigTree!!!

Who said that you can’t teach an old dog new tricks? Seniors are really sucked in with this Covid SCAM !

They don’t do much online so their news is restricted to TV and radio.
And they remember stories of how horrible the Spanish Flu and polio were. And how a vaccine saved humanity from the latter.
Couldn’t save my parents from getting jabbed. But I have them taking quinine now.

Did you even read the study? The reason the deaths will be mostly people who have already been vacinnated is because of the extremely high rate of vaccination uptake in the old age group…duh! Old people are always the highest represented group in deaths. Read the study, dammit! Here is the paragraph: This shows that most deaths and admissions in a post-Roadmap resurgence are in people who have received two vaccine doses, even without vaccine protection waning or a variant emerging that escapes vaccines.This is because vaccine uptake has been so highin the oldest age groups (modelled here at 95%… Read more »

Check this out for more info. Please share with everyone you care about.
https://therealtruthnetworkcom.wordpress.com/2021/01/29/vaccines

An important point is worth mentioning. In paragraph 32, the report says: “This can be attributed to the high levels of uptake in the most at-risk age groups” In paragraph 56 it continues with the graphs and says: “This is not the result of vaccines being ineffective, merely uptake being so high.” While they are quick to ascertain that this is not due to the vaccines failing, this is a mere shill as they cannot substantiate this statement, for the following reasons: The approximately 36,000 dead that they forecast for a mere 2 months of this “fourth wave” represents a… Read more »

CASES NOT DEATHS! EVENT 201 proves this was all a PLANNED FARCE! Understand that Epstein GUILTY Trumpy is a deep state FAKE like all others before him and gave Gates GAVI group a BILLION to FORCE a vaccine on YOU using the MILITARY in a ‘powerful way’ Gates controlled and funded Fauci AND Birx and they ALL should be EXECUTED!

Why couldn’t Gates and his friend Fauci have released a real virus on the population?
Maybe it was less deadly than they hoped. Even Dr. Coleman and others say it exists. Just that it’s no worse than a bad case of the flu for 99% of us.

I’m sorry no…the likes of Van Bossche and Luc Montagnier are wolves who cunningly promote a cover up for the fact that people are dying from the jabs themselves, not from ‘deadly variants’.
Epidemiologists such as Prof Dolores Cahill and Prof Sucharit Bhakdi already warned that mutations/variants are never dangerous. Explain this to me:
How can a fragment of a virus that doesn’t exist [fails Koch Postulate] inside a jab that isn’t a conventional vaccine, produce “deadly variants”?
Nah, Bossche and Montagnier are covering up the real reason why people are dying.
This isn’t rocket science!!!

Sigh. The “vaccinated” will get sick and die. Leading to more panic, lockdowns and needles. There may be deadly variants. Vaccine variants is the appropriate name. This thing reminds me of the mental illness industry. A form of social engineering run by technocrats. You feel gloomy because you can’t make friends at college. The shrink puts you on a drug to block your body’s ability to reabsorb serotonin properly–falsely claiming they know your depression stems from a known chemical imbalance with no spinal tap or bloodwork. You go gaga and can’t sleep for 3 weeks. Minor side effect. The technocrat… Read more »

The Whitehouse targets evangelical Christians for the Vax – Armor of Truth