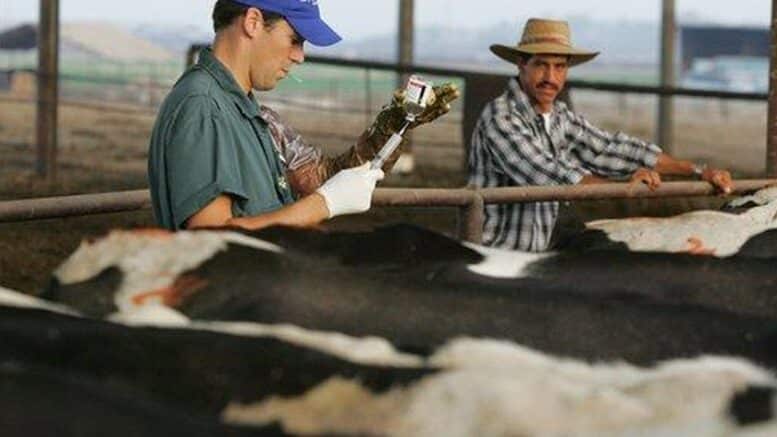 Please Share This Story!
PDF 📄
I have already thoroughly documented the Technocrat/Transhuman goal of taking over all genetic material on earth. (see video below) This article is indicative. Although mRNA is the current vector for changing biological functions, direct DNA manipulation is coming. The megalomanic gene scientists who see no problem with hijacking life itself must be forcefully rejected in word and deed. ⁃ TN Editor

The pharmaceutical industry has been quietly at work for years now concocting excuses and methods to inject livestock — whose flesh will eventually end up in human digestive tracts — with mRNA therapies marketed as “vaccines.”

Bovine respiratory syncytial virus (RSV) is a significant viral pathogens [sic] of young cows that is a key component of the respiratory disease complex and often leads to secondary bacterial pneumonia… we will test a novel mRNA vaccine system we have developed that substantially lowers the price point for production animals and may lead to more thermal stable transcripts compatible with vaccinating on the farm… Our overall goal is to test a novel mRNA system for inducing immunological protection from bovine RSV infection.

In Australia, the vax-happy government has “fast-tracked” mRNA vaccine development for cattle in partnership with a U.S. biotech firm:

“The NSW Nationals in Government are taking the threat of FMD and Lumpy Skin Disease extremely seriously, and this milestone is another step forward in preparing for a potential outbreak,” Mr Toole said…

“COVID-19 demonstrated to us that all possible avenues in developing vaccines must be explored and we will leave no stone unturned.”

Two-thirds of captive-bred black-footed ferrets have been vaccinated for the novel coronavirus, and not a single one of the endangered mustelids is known so far to have contracted the disease.

Researchers are concerned that black-footed ferrets (Mustela nigripes) may be able to contract SARS-CoV-2, the virus that causes COVID-19 in humans, since close relatives like European mink (Mustela lutreola) and domestic ferrets (Mustela putorius furo) can be infected.

After finding similar species can be infected, researchers quickly began to increase safety protocols at zoos and the U.S. Fish and Wildlife Service’s National Black-footed Ferret Conservation Center in Colorado, the main source of the captive-breeding and release program for the federally endangered species.

What will the consequences be of vaccinating every captive and wild animal on Earth? No one knows, including the reckless pharmaceutical firms conducting this mass-scale experiment.

It’s been way past time to stop pussyfooting around the core of the problem: the people directing these efforts are pure, raw evil. Whether they are literally possessed by some off-world spirit, just plain psychopaths, or whatever else, is up for debate.

What is increasingly non-debatable is that, whatever the root cause of their hatred for life on Earth and nature itself (as a proxy for God), they won’t stop until they a.) are neutralized with irresistible force (ideally through legal means) or b.) have irreversibly infected the entire animal, plant, bacteria, and fungi genome with their Frankenstein genetic material.

May these robotoids rot in hell!!!!

“What will the consequences be of vaccinating every captive and wild animal on Earth? No one knows, including the reckless pharmaceutical firms conducting this mass-scale experiment.” That’s a statement that no one cane make. This writer doesn’t have a clue what “they” know. Who’s to say they don’t know. You kind of have to admit that if someone can remain in power, as these “elite” have done for literal millenia, then they must know a hell of a lot that we don’t know. And look, they created a “vaccine” that alters people in ways unknown to us as yet. Not… Read more »

The Supervillain plan works fine until they poison their own people. Mass poisonings imperil all, even the globalists’ children. How committed are they to the cause of depopulation? Enough to stop the family line?
while commitments like being pro-vax, pro-diaper, might sound good they don’t mean much when expressed as superficial pledges. Easy it is to raise the arm during the Hate Hour. More likely this scheme will die when elitists realize their kids will be poisoned along with the herd.
Think more like carbon credits—outward preening while boarding private jets, Wrong-action displaying Wrong-thinking.

I know of a farmer through a friend, who tested the mRNA vaccine in Lismore, NSW Australia and they lost 20% of the cows.

You can’t call that which is healthy, sick and tests are a hoax. For some reason they always show a false positive. But go ahead, let them kill your food, let them inject your food with poison, be the human murderer you were meant to be

If the spike protein’s mRNA of the COVID-19 ‘vaccine’ is transmitted through human mother’s milk, what will keep the spike protein mRNA of bovine RSV injection from being transmitted through cow’s milk to humans? We know that RSV is more detrimentiable to the elderly and infants under 12 months…but what is going to keep back other animal retro viruses from being transmitted to humans as these scientists and pharma companies plan to vaccinate all domestic animals–this is all about “big money” for the pharmaceutical companies involved and the big investors…this should definitely be of concern to all of us regarding… Read more »