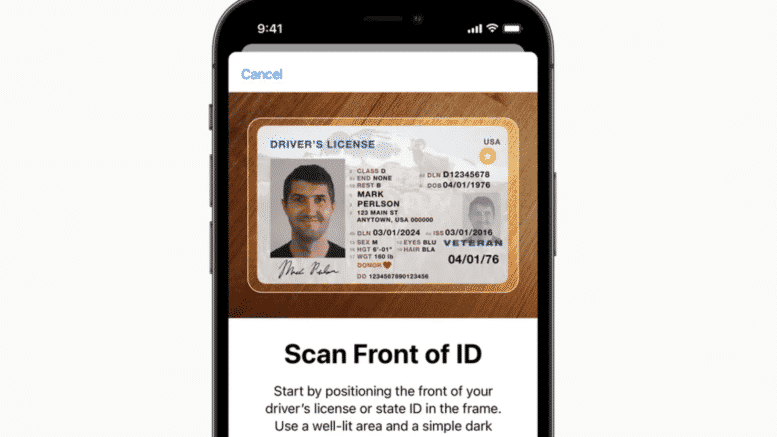 Posted By: Chris Welch via The Verge September 2, 2021

Please Share This Story!
PDF 📄
Apple’s commitment to privacy is taking another hit by allowing users to add their driver’s license to an iPhone and then transmit it wirelessly to authorities upon request. The TSA has already announced that it will use the feature at airport checkpoints and security lanes.

This comes on the heels of the announcement of a program to analyze users’ photos for child pornography and reporting suspected violators to the police.

Apple’s intent is to create a barrier to keep users attached to their iPhone devices at the cost of personal privacy and control over extremely personal data. ⁃ TN Editor

Apple has announced the first US states that will support iOS 15’s new ability to store driver’s licenses and state IDs in the Wallet app. Arizona and Georgia will lead the way, with Connecticut, Iowa, Kentucky, Maryland, Oklahoma, and Utah following after that. No timetable is given for exactly when the new feature will be adopted by these states, however: Apple only says that consumers can expect “more information at a later date.” And the Transportation Security Administration (TSA) has again confirmed it will open select airport checkpoints and security lanes to Apple’s mobile IDs once states begin making them available.

Adding a state ID or driver’s license to Apple’s Wallet app works similarly to the way you currently add a credit card. But after scanning your license or ID with your iPhone’s camera, you’re also required to provide a selfie that your state can use for verification purposes. Apple says “users will also be prompted to complete a series of facial and head movements during the setup process” for added security.

Apple is also again emphasizing the privacy protections it has in place for driver’s licenses and state IDs, noting that “Apple and the issuing states do not know when or where users present their IDs” and that biometric authentication is required for the data to be shared. IDs are “presented digitally through encrypted communication directly between the device and the identity reader, so users do not need to unlock, show, or hand over their device.”

With that last part, it seems Apple is trying to address the concerns that some have raised over what mobile IDs could mean for interactions with police and other law enforcement. It sounds like you won’t ever have to fully unlock your phone to share a mobile ID. The idea that the TSA will let you breeze through security without at least being shown your phone’s screen feels like a stretch, though.

Apple says its implementation of mobile IDs “supports the ISO 18013-5 mDL (mobile driver’s license) standard which Apple has played an active role in the development of, and which sets clear guidelines for the industry around protecting consumers’ privacy when presenting an ID or driver’s license through a mobile device.”

“Prompted for facial and head movements” go fetch the ball doggy? Anyone trust Apple NOT to get either 1) hacked 2) salesman of your data to whoever 3) in bed with deep state. Doesn’t Apple have a “back door” to their encryption required BY LAW to hand over to intelligence agancies upon notice… Anyone with half a brain knows the “protect the children” excuse is a euphemism for total facial recognition database of ENTIRE POPULATION social credit scoring system… once you start these programs they can never be stopped…