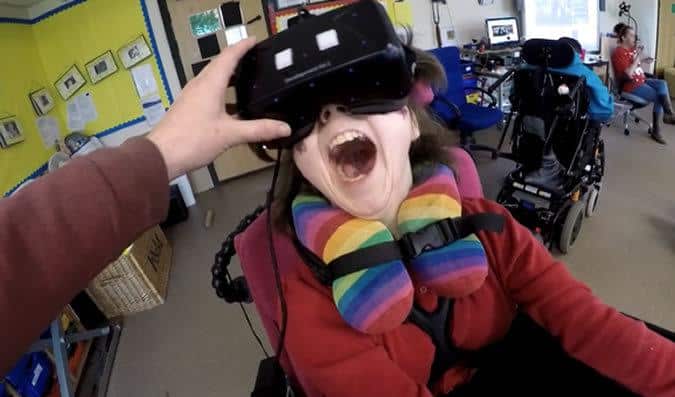 Virtual reality headsets trick young brains into believing the unreal is real, potentially re-wiring certain critical brain functions. Parents should take steps to protect their children from use at home and in schools. ⁃ TN Editor

It’s expected to be the hot holiday gift of the season: virtual reality headsets. We know it’s a cool new experience but there’s still a lot we don’t know about the technology, especially when it comes to kids.

The headset completely immerses users in a new 3D virtual world. “I felt like I was actually there.” said one first-time user. “There’s no age limit to this,” said another virtual reality fan.

But there actually is an age limit. Many of the top selling brands warn against kids using the device. Oculus Rift and Samsung VR Gear say it’s not for kids under 13. Sony PlayStation is recommended for kids 12 and up. And the HTC Vive is less specific, just saying it’s not for young children.

“This is a big area of both interest and some concern,” said Dr. Joseph Rizzo of Mass Eye and Ear. Dr. Rizzo told us the research is still out on VR. “There’s a legitimate question about whether that much exposure to artificial visual stimuli will alter the way the brain accepts and processes visual information. It’s an unknown.”

The challenge for the eyes and the brain while using virtual reality is that while the image is up close to your face it manages to trick your brain into seeing depth. We don’t know what that type of conflict might mean for any user.

“The immediate concerns are with the younger users because they will be prone to use them for much longer periods of time,” explained Dr. Rizzo. Those concerns include what this might mean for a young, developing brains. “You need to understand whether the brain is changing in some permanent way.” There’s also a possible increased risk of becoming near-sighted.

Just as Frankenstein planned it to bring us all into a world of virtual reality that now they can reprogram or increase the already established programming even further.