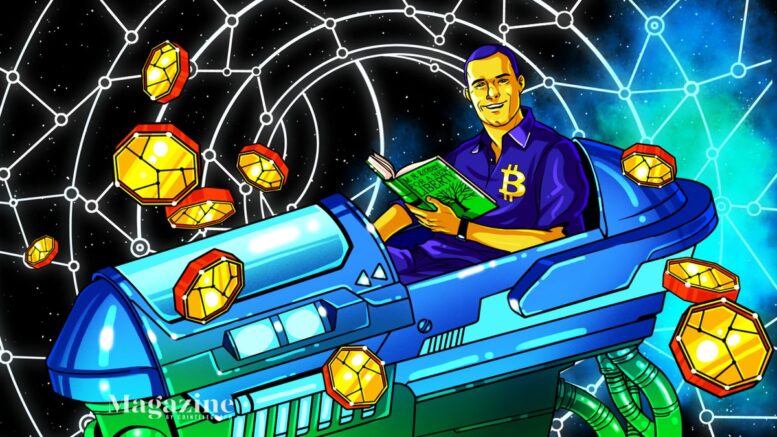 Please Share This Story!
PDF 📄
Transhumanism seeks to ultimately conquer death by applying advanced technology to the human condition. Crypto leaders are typically young, but also thoroughly saturated with technology that seems to be attractive to the Transhuman movement, creating an interesting crossover. ⁃ TN Editor

“Blockchain communities are embracing, and funding, life extension technologies. The link stretches back to the cypherpunks’ crossover with the transhumanists.”

Ethereum co-founder Vitalik Buterin is on a mission to make humans immortal. Buterin, 27, proposes the idea that “aging is an engineering problem.”

He is not alone in his combined interest in Bitcoin and biohacking. Famous biomedical aging researcher Aubrey de Grey, Xanadu architect and Agoric chief scientist Mark Miller, Bitcoin Cash billionaire Roger Ver and former chief technology officer of Coinbase and a16z general partner Balaji Srinivasan, are all fascinated by the pursuit of longevity.

“I have been gratified since the beginning of blockchain to see the enormous fanbase that I and the longevity movement have in there.”

Miller, alongside his engineering hall-of-fame accomplishments, is a senior research fellow at the Foresight Institute, a not-for-profit founded in 1986 with the aim of “advancing technology for the long-term benefit of life.”

“I’m very much involved in this new world of crypto commerce, often referred to as the blockchain sector,” he says. “I’m very hopeful about that as creating an ecosystem in which secure software will dominate because insecure software results in massive losses quickly, with no recourse.”

Srinivasan’s Twitter bio describes his vision as: “Immutable money, infinite frontier, eternal life. #Bitcoin.” Srinivasan states that “the ultimate purpose of technology is to eliminate mortality” and “life extension is the most important thing we can invent.”

Blockchain communities are clearly excited about longevity. But what does cryptocurrency have to do with life extension, and where might this future be headed?

It turns out that the link between crypto and cryogenics stretches back to core contributors, and the Cypherpunks mailing list and its links to transhumanist groups, including the first person to transact Bitcoin with Satoshi, Hal Finney.

If we're being more open minded about accepting new weird ideas, can I suggest anti-aging research? Aging is a humanitarian disaster that kills as many people as WW2 every two years and even before killing debilitates people and burdens social systems and families. Let's end it.

Crypto philanthropists are donating significant wealth to this area, which is typically difficult to garner mainstream support for. They may be the only people on the planet optimistic enough to fund tech that currently only exists in sci-fi novels.

According to Buterin, longevity is a battle worth fighting for. Buterin donated $25 million in SHIB cryptocurrency tokens to the Future of Life Institute in June 2021 and has donated over $350,000 to the SENS Research Foundation to “reimagine ageing”.

He discussed the topic in recent podcast interviews with the likes of Lex Fridman and Tim Ferriss saying that “life extension is definitely really important to me.”

“I think I hope to see the concept of seeing your parents and grandparents die just slowly disappear from the public consciousness as a thing that happens over the course of half a century.”

Buterin has emphasized his adherence to the moral philosophy of effective altruism. This value, known to transhumanists as the moral urgency of saving lives, is perhaps what motivated his donations of dog coins to both COVID-19 relief in India and life-extension.

“Just even the process of aging turning into something that just becomes reversible and it being a regular thing for people to live one and a half, two centuries and then go even further from there,” Buterin states.

Pinned in Buterin’s Twitter is an essay called “The Fable of the Dragon Tyrant” by professor Nick Bostrom, director of the Future of Humanity Institute. It argues that allowing death from old age is unethical. If you view aging as a disease, the urgency to support the transhumanist project also makes sense.

“While we still lack effective and acceptable means for slowing the aging process, we can identify research directions that might lead to the development of such means in the foreseeable future,” states Bostrom. The key to freeing humanity from the dragon tyrant of aging, is funding. The new riches from crypto are key.

Bitcoin.com founder Roger Ver has already signed up to be cryogenically frozen. “Rather than investing in cryptocurrency stuff, I want to focus on the extreme life extension technologies, because if you die, you can’t enjoy your life anymore,” Ver told Cointelegraph. He’s so confident in the tech, he even considered being cryogenically frozen as a legitimate alternative to going to prison in 2002.

Where transhumanism and crypto overlap

The lofty, futuristic ideas of transhumanists depend on resilience and digital infrastructure. This is especially true for the goal of friendly artificial intelligence, which is seen as an enabling condition for rapid development across all other core principles of the project. Thanks to blockchain technology, and blockchain philanthropy, we are beginning to have the resources to do it.

Blockchain’s immutability makes it the perfect long-term infrastructure. Cypherpunks were paranoid about Orwellian dystopias in which authorities would rewrite history to match state propaganda.  The architectural and political decentralization of public blockchains means that no one can tamper with, control or delete the record of history. This makes it the perfect record-keeping infrastructure if we are going to live forever.

This is essential when it comes to your brain image or your Bitcoin balance. In order to document who owns what coins when you are cryogenically frozen and woken up in the next century, you need resilient, long-term, tamper-proof blockchains. The values of independence and immutability are essential to both crypto enthusiasts and transhumanists. Buterin states:

Man cannot stop the aging process – For the wages of sin is death……Romans 6:23
Man’s soul is immortal. It will live in Heaven or Hell

I say frost’em and toss’em. Perhaps the next generation of elite kiddies will have a shred of common sense.

[…] Why Are Crypto Leaders Embracing Transhumanism? […]