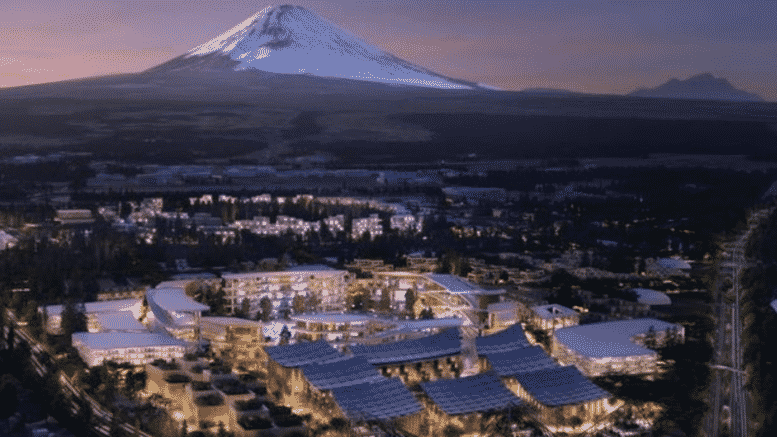 Please Share This Story!
PDF 📄
Global corporations with Technocrat leadership are drawn to create autonomous smart cities from scratch that will be run by AI. They will be based on Sustainable Development, aka Technocracy, and will provide a model guide for future smart cities. Toyota is the latest entry. ⁃ TN Editor

Toyota has started building a “smart city” which will include self-driving cars, robotics and AI homes.

Construction began this week at the base of Japan’s Mount Fuji, and has been dubbed the “Woven City.”

The 175-acre city, around 62 miles from Tokyo, is set to function as a technological testing ground, with 360 residents to test and develop the tech.

This includes inventors, senior citizens, families and children, who will test technologies like robotics, artificial intelligence and smart homes.

Eventually, the city will be home to around 2,000 Toyota employees, reports Business Insider.

Other aspects of the Woven City include hydrogen fuel cells and it is reported the city will be fully sustainable.

In order to be fully sustainable, building will be made out of wood to minimise carbon footprint.

The smart homes will assist with daily living and use sensor-based AI to monitor health and take care of basic needs, according to Toyota.

The 2,000 residents are expected to eventually include employees, retired couples, retailers and scientists as well as families.

The plans for the city was first unveiled last year at CES, a tech trade show in Las Vegas, but news of the updated plans were released this week.

The company released artist impressions of what the city is set to look like when it’s finished.

After construction began this week, on the site of one of Toyota’s former manufacturing plants named Higashi-Fuji, the organisation did not disclose who the first residents will be.

However, the cost of the project is unknown and Toyota has not yet given a date for completion, although residents will be able to move in the next five years.

And you won’t own anything, and you will love it….You will trade freedom for overlords, become a cyborg and it will be wondersul.