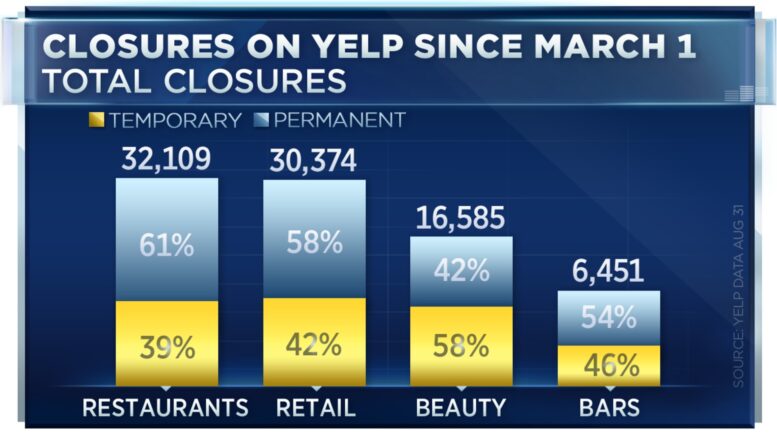 The Technocrat-led Great Panic of 2020 has created outright genocide among small business in America. Small businesses account for 80% of overall jobs in America, and as a mainstay of employment, took decades to develop: Now destroyed in mere months. ⁃ TN Editor

Yelp on Wednesday released its latest Economic Average Report, revealing business closures across the U.S. are increasing as a result of the coronavirus pandemic’s economic toll.

As of Aug, 31, 163,735 businesses have indicated on Yelp that they have closed. That’s down from the 180,000 that closed at the very beginning of the pandemic. However, it actually shows a 23% increase in the number of closures since mid-July.

In addition to monitoring closed businesses, Yelp also takes into account the businesses whose closures have become permanent. That number has steadily increased throughout the past six months, now reaching 97,966, representing 60% of closed businesses that won’t be reopening. 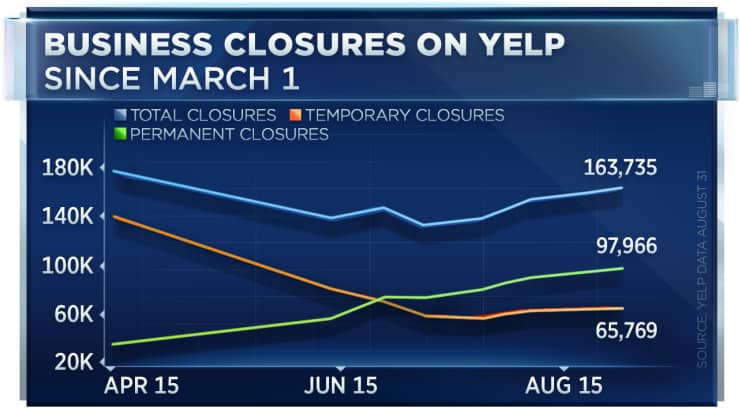 “Overall, Yelp’s data shows that business closures have continued to rise with a 34% increase in permanent closures since our last report in mid-July,” Justin Norman, Yelp’s vice president of data science, told CNBC.

Yelp’s September report marks six months since March 1, the date that Yelp considers to be the beginning of the business crisis.

In order to gather closure data, Yelp monitors changes in business hours or descriptions on its app, offering an immediate, localized view of the impact the pandemic has had on small businesses.

“Despite the hard hit small businesses have certainly taken, we’ve seen that home, local, professional and automotive services have been able to withstand the effects of the pandemic better than other industries,” Norman noted.

The data supports the trend that most consumers are choosing to stay home over patronizing establishments physically, as home and professional services such as landscapers, contractors, and lawyers, see a much lower closure rate than clothing stores and even home decor businesses. Auto and towing services also reported a relatively low closure rate.

“Consumers still need these services,” Norman said. “Through the rise of virtual consultations, and contactless or socially distanced services, these businesses have been particularly resilient during this time.”

Throughout the past six months, restaurants, bars, and nightlife have been hit the hardest by the restrictions brought along by the pandemic: 32,109 restaurants have closed, as of Aug. 31. The number of restaurants forced to permanently close is slightly above Yelp’s total average, at 61%.

“60% Of Pandemic Closures Are Now Permanent” That was the plan.

How bloody pathetic this whole thing is, makes me angry that these psychopaths are getting away with this, unbelievable to me still.