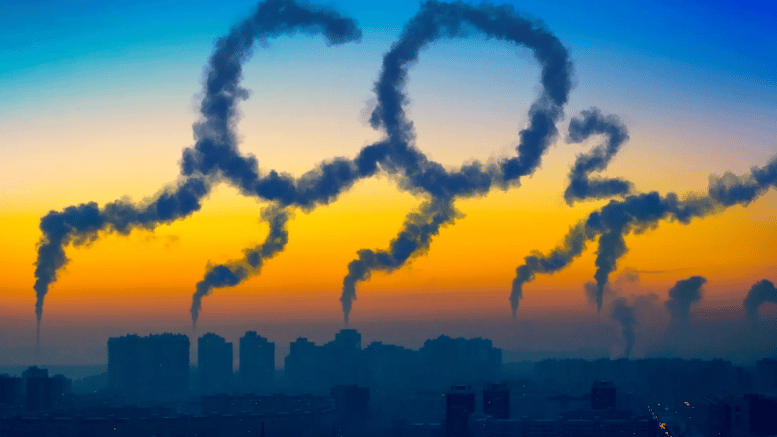 Please Share This Story!
PDF 📄
Because nation-states can do nothing to reduce carbon emissions, calls continue for personal punishment over excessive carbon emissions. When you exceed your allowed amount, you will pay dearly for every activity that produces carbon thereafter – which is everything.

Humans breath oxygen and exhale carbon dioxide. Every other activity of life directly or indirectly produces carbon dioxide, all of which is used by green plants during photosynthesis, providing food for humans. This is the carbon life-cycle that sustains the world. Decarbonization intends to break this cycle, thus reducing food and population. In other words, decarbonization is patently anti-human. ⁃ TN Editor

An individual carbon dioxide limit should be applied to every person in order to establish a “planetary guardrail” in the effort to combat allegedly man-made climate change, a leading German scientist has argued.

Hans Joachim Schellnhuber from the Potsdam Institute for Climate Impact Research (PIK) said this week that every person should have a limit of three tonnes of C02 emissions per year and those who exceed their limit should be forced to pay for the pleasure.

In comments reported by Taagesschau, Schellnhuber said that there were are two competing property rights issues at hand, namely the right to spend one’s money on high emissions activities and the rights of the rest of the population to “have an environment worth living [in]”.

In a carbon credit style scheme, those who emit over the three-tonne limit by the middle of the century would need to privately purchase credits from those who are under the limit, he suggested: “Every person gets three tons of CO2 per year, but if you need more, you just have to buy it.”

At present, according to the news outlet, the average German is far above Schellnhuber’s proposed limit, as ten tonnes of C02 emissions are produced by the average citizen. Citing the Paris World Inequality lab, there are some millionaires within the country that produce over 100 tonnes of CO2 per year, and some thousands of elites worldwide emit over 2,000 tonnes per year.

Aside from not spelling out how he expects people to drastically reduce their carbon emissions, the German scientist did not elaborate on how exactly this will be tracked and monitored.

Alibaba is developing a digital “individual carbon footprint tracker” to monitor the actions of the public, the firm’s president announced at the globalist World Economic Forum in Davos, Switzerland on Tuesday.

Ironically, given that the annual meeting — which will convene again next week — sees thousands of private jets descend upon the Swiss ski retreat, Evans went on to say that the tracker would ensure that people are “incentivised to do the right thing even if they were provided the opportunity to do the wrong thing.”

I wish I’d said that…

They use Dry ice to spray into the clouds, dry ice is carbon, they are loading the atmosphere wjth carbon. Chemtrails- Stratospheric Aerosol Injections-The Con-Trail lie.

Oh, SHUT UP!
No one but Woketards are listening to you DAVOS hypocrites and your made-up science, except for the sole purpose of preventing you asshats from murdering the rest of us.