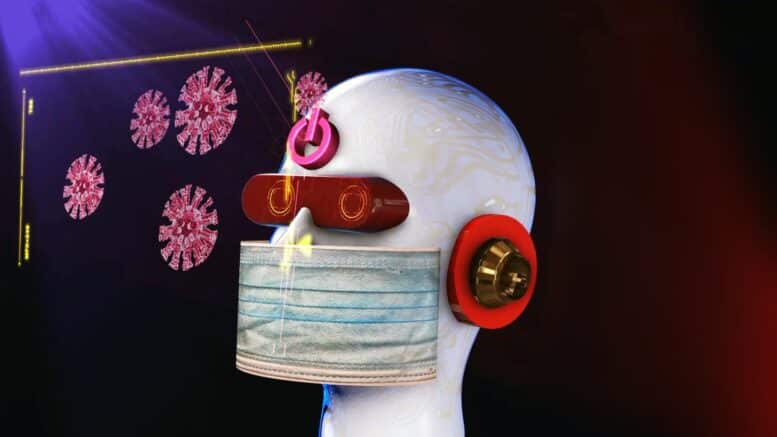 Please Share This Story!
PDF 📄
Transhumans and Technocrats, joined at the hip like Siamese twins, are bent on taking over the entire world and all genetic life within it. Moderna, et al, have successfully invaded human flesh to hack the “software of life”. They are now using AI to create endless, artificially synthesized mRNA shots to continually hack the “software of life.” This is a must-read article.

The next invasion will not be voluntary as “vaccines” are being turned into communicable virus that will infect a population without knowledge or consent.  This is nothing less than biological warfare and it is time the world started calling it what it is.  ⁃ TN Editor

We’re living out a sci-fi thriller where unaccountable corporations openly force advanced tech into our bodies. Capitalizing on the current germaphobic frenzy, Moderna’s co-founder, Dr. Robert Langer, saw his experimental mRNA vaccines pushed on the American public. Riding that dark wave of corporate and government mandates, Langer became an instant billionaire. But this isn’t the only fanged rabbit in his magic top hat.

In 2018, the MIT scientist had developed a quantum dot tattoo—an under-skin nanoparticle QR code, to be scanned by smartphones—in order to track the vaccinated masses and ensure compliance. Like many undignified experiments, this was to begin in the Third World—cuz social justice.

This vaxx & track technology drew the intense personal interest of Bill Gates. That interest naturally translated into millions of dollars in funding. This is in addition to $20 million given to Moderna by the Gates Foundation back in 2016 to develop a new type of vaccine—where bits of injected genetic code would hijack the cell’s machinery to produce reams of pathogenic proteins.

Taken together, these innovations are rapidly converging on a long sought after goal—an inescapable surveillance state, controlled by corporations, in which the global population is subject to continual medical experimentation.

This is not a new story. Many argue it was first written down by St. John on the island of Patmos, some two thousand years ago. In recent decades, sci-fi pulp novels and paranoid tracts on the subject have piled up to the ceiling. The Internet is flooded with cartoonish depictions of evil, chip-implanting globalists—many of which are remarkably accurate.

Today, in the wake of what appears to be a leaked bioweapon, a subsequent global pandemic, the cynical declaration of a Great Reset, a laughable disinformation campaign by every major media outlet, and the imposition of total digitalization—in which even the human body requires regular genetic software updates to remain viable—we now behold a pale horse. That sick beast is poised to trample every liberty we once enjoyed.

The “spiky patch” quantum dot tattoo was developed by MIT scientists Dr. Robert Langer and Dr. Ana Jaklenec. Their research was published in the prestigious Science Translational Medicine. I first wrote about this insidious project for ColdType in an article entitled “Bill Gates: Chipping the Hand of God,” published May of 2020, and again last year in my piece “Reaching for the Mark of the Beast.”

The quantum dot tattoo is to be administered using a microneedle patch in tandem with any given vaccination. Fluorescent nanoparticles are placed in a specific configuration—a sort of QR code embedded in the flesh—which can be scanned with infrared light on a modified smartphone. Experimentation on lab mice indicates the quantum dot tattoo will last for up to five years. The project’s leader openly stated that their goal is “widespread adoption” in humans.

This is not some “laptop conspiracy.” It was covered extensively in 2019 by Smithsonian Magazine, Scientific American, Stat News, MIT News, Rice University News, and elsewhere. Despite the widespread coverage, “fact-checkers” across the board have deliberately concealed this reality by focusing on claims that “microchip implants” are being used to track vaccination, often with no mention of the actual quantum dot project. In a CBS interview last year, Bill Gates pretended to know nothing about it—just like he knew nothing about his Microsoft monopoly or any Epstein Island retreats.

Aside from the quantum vaxx tattoos, Microsoft recently patented a different system wherein wearable (or implanted) biosensors will monitor a person’s behavior, including eye movements, brain waves, bodily fluids, and attention. In this system, desired activities are to be rewarded with cryptocurrency, like some digital stick-and-carrot routine. By chance, the patent application received the publication number WO/2020/060606.

“Fact-checkers” assure us only a “conspiracy theorist” would notice something so ominous. Apparently, the $319 million that Gates paid out to corporate media outlets was money well spent.

In order to market their quantum dot tattoo, Langer and Jaklenec founded the company Particles For Humanity—in partnership with Dr. Boris Nikolic of Biomatics Capital—with $5 million from the Gates Foundation. Previously, Nikolic served as Bill Gates’s chief science advisor, and by pure coincidence, was named as a successor executor in Jeffery Epstein’s will. It’s also worth noting that both Langer and Nikolic have profiles on the World Economic Forum’s website—but of course, anybody who’s anybody does.

At a JP Morgan conference in January of 2019, Particles for Humanity presented a bleeding heart case for tagging hapless hut-dwellers with under-skin implants. The implicit rationale is that these societies will never achieve sufficient organization to keep proper vaccine records. Across the Third World, mass vaccination is the white man’s burden.

Because technocrats have to know all—and because the unvaxxed in Africa and South Asia hide in the heart of darkness, concealed from the All-Seeing Eye—the MIT scientists proposed “on-patient medical record embedding vaccination information into skin…invisible data only readable by custom, low-cost, mobile technology.” In other words, quantum dot tattoos to be scanned with modified smartphones.

As with any vaguely satanic experiment conducted by Ahriman-possessed technocrats, “experts” are sorting out the “ethical concerns.” In December of 2019, the MIT team was ready to send interviewers to Malawi, Benin, Kenya, and Bangladesh to survey acceptance in each population. The researchers would ask these simple folk—who still cling to their Bibles and Qur’ans—if they’d be open to getting fluorescent nanotech QR codes tattooed onto their and their children’s bodies.

Due to the pandemic, this survey was cut short. Does that mean Particles For Humanity and the Gates Foundation will just go for it?

This global mRNA vaxx experiment is about to ramp up dramatically. Pulling ahead of the pack, Moderna is currently developing mRNA vaccines for fifteen different diseases, from HIV and tuberculosis to malaria and the common flu. That means an endless array of experimental, barely tested vaccines will soon flood the market. If recent history is any guide, institutional mandates and digital vaxxport updates will follow close behind.

This potential for rapid production and near-instant regulatory approval, reckless as it may be, was celebrated by the transhumanists at Singularity Hub:

[mRNA is] faster, simpler, and more adaptable than any previous vaccine technology. Because they no longer rely on physical target proteins from a virus—rather, just the genetic code for those proteins—designing a vaccine just requires a laptop and some ingenuity. “The era of the digital vaccine is here,” wrote a team from GlaxoSmithKline.

This is the Jab 2.0 for Humanity 2.0—where our immune systems require constant software updates by way of alien genetic codes regularly injected into our bodies. Machine learning makes all this possible. The article “Designing Vaccines: The Role of Artificial Intelligence and Digital Health,” published by BioProcess International in October of 2021, is equally celebratory:

According to the founder and executive chairman of the World Economic Forum, Klaus Schwab, the fourth industrial revolution…is characterized by an unprecedented development and exponential growth of a high-technology industry transforming society at every level. In particular, healthcare systems are evolving rapidly to adapt to the new reality. [T]he main technologies currently shifting the paradigm of medical research are artificial intelligence and machine learning. …

From a marketing perspective, experts predict that the global AI healthcare market will grow from US$4.9 billion in 2020 to reach $45.2 billion by 2026.

When citizens are forced to buy a company’s potentially dangerous products, either directly or through tax dollars, such staggering wealth accumulation is all but assured. The role of AI in this gold rush is quite simple—machine learning systems can rapidly identify useful molecules before actual testing moves to the biolab. Beginning from basic principles—physics, chemistry, microbiology—a deep learning system can generate and virtually test an enormous variety of drug compounds or mRNA vaccines in silico.

Machine learning enables the creation of models that learn and generalize the patterns within the available data and can make inferences from previously unseen data. With the advent of deep learning, the learning procedure can also include automatic feature extraction from raw data. … Taking this work together, it is clear that spike protein has been the most popular candidate for virtual vaccine discovery.

Moderna has fully embraced this method. The Big Pharma corporation—co-founded by the creator of the quantum dot vaxx & track technology—is now using AI to generate possible vaccines at incomprehensible speeds. Bits of genetic code can be “dreamed up” by purely digital minds. That bio-information will then be injected in human populations and translated into swarms of novel proteins.

Sounds like the mark of the beast to me. I don’t think we’re quite there yet. It doesn’t seem to me like we have much farther to get there though. Not that I have a death wish. In my opinion standing before a firing squad or starvation would be a better option. I’m not interested in losing my humanity, health or salvation just to stay alive in a world that’s been taken over by demons in the flesh. The only thing they’re offering the world is more suffering, tyranny, sickness, disease, poverty, damnation and destruction. They would have to replace… Read more »

Totally agreed, although I would prefer the firing squad over starvation…

We must resist/fight back when the goon squads come around for the non compliant patriots. So few patriots today, that few will be motivated to do anything. Must start in the communities. Life won’t be worth living anyway than to live as livestock/slaves.

Thank you Mr. Wood for sharing this brilliantly written article!

Those quantum dots – ID2020 – are already inside the C19 jabs, so the jabbed have already been implanted with them; they are the genuine jab ‘passports’.

Usually one performs software testing within a chosen testing group before the full roll-out.

You’ll Be Transhuman Whether You Like It Or Not | Truth11.com

It is the Soul that imbues life into every cell every molecule of the human body giving it Life to live. The Soul (Divine Consciousness/PureEnergy) is who You are. Consciousness creates the body not the other way round You are consciousness, consciousness is the substance of forms (body). Transhumanism: In order to get these things to function it needs PURE ENERGY, a Soul and where do they get this PureEnergy from? Millions of people especially children in the millions disappear. We are seeing children and babies being murdered by way of vaccines and wars etc. etc.. So if they show… Read more »

It is the Soul (DivineConsciousness/PureEnergy, you hold a spark of it in your heart) that imbues life into every cell, every molecule of the human body. The Soul is who You Are. Consciousness creates the body as consciousness is the substance of form(body). Transhumans: to make these things function like a human being but this time to function as a controlled human you need a Soul. Millions of people on earth are murdered especially children by way of vaccines, wars, tortured in horrific situations, millions . Bill Gates and his globalist buddies do this on a daily basis with their… Read more »