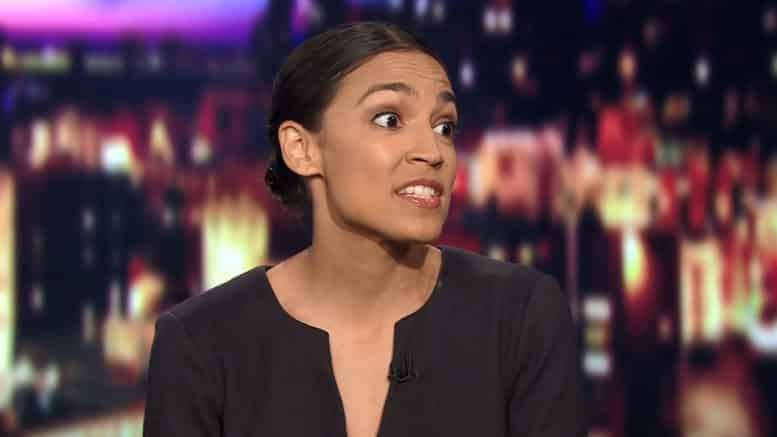 Incoming New York Rep. Alexandria Ocasio-Cortez brings with her a massive online following, influence she says she’ll deploy only in support of candidates and politicians who support her plan for a “Green New Deal.”

“The Green New Deal” is something Ocasio-Cortez invokes frequently in media appearances and rallies.

So what’s actually in it?

Her office recently released the text [full text produced below] of a proposed House rules change outlining the plan.

The proposed rule change for the upcoming 116th Congress would require the creation of a “Select Committee for a Green Deal” that would be responsible for creating the plan by January 1, 2020, with corresponding draft legislation soon after. The text of the rule change lays out the committee’s jurisdiction and required areas of action.

Its scope and mandate for legislative authority amounts to a radical grant of power to Washington over Americans’ lives, homes, businesses, travel, banking, and more.

Early on, under “Jurisdiction,” the document makes clear its grandiose philosophical vision: “The select committee shall have authority to develop a detailed national, industrial, economic mobilization plan for the transition of the United States economy to become greenhouse gas emissions neutral and to significantly draw down greenhouse gases from the atmosphere and oceans and to promote economic and environmental justice and equality.”

In addition to achieving its goal of “meeting 100% of national power demand through renewable sources,” the document also repeatedly states the Green New Deal will advance non-environmental projects, such as, “social, economic, racial, regional and gender-based justice.”

Ocasio-Cortez’s plan further claims it will (virtually) eliminate poverty: “The Plan for a Green New Deal (and the draft legislation) shall recognize that a national, industrial, economic mobilization of this scope and scale is a historic opportunity to virtually eliminate poverty in the United States and to make prosperity, wealth and economic security available to everyone participating in the transformation.”

Between its calls for “upgrading” homes and overhauling travel, public infrastructure, and even the way Americans consume electricity, the plan leaves virtually no facet of everyday life untouched. Think of how often you don’tuse electricity to imagine how much of your average day the plan wouldn’t impact.

The proposed committee would also have seemingly total oversight of American industry, with a mandate for pushing union membership. Under “Scope of the Plan,” a section on labor states the committee’s final plan shall: “Require strong enforcement of labor, workplace safety, and wage standards that recognize the rights of workers to organize and unionize free of coercion, intimidation, and harassment, and creation of meaningful, quality, career employment.”

Later in the document, Ocasio Cortez’s plan imagines creating a national jobs force to help people participate in this “transition.” The Green New Deal, it says, shall “provide all members of our society, across all regions and all communities, the opportunity, training and education to be a full and equal participant in the transition, including through a job guarantee program to assure a living wage job to every person who wants one.”

The plan also imagines creating governmental support for “transitioning” minority communities. The deal shall: “ensure a ‘just transition’ for all workers, low-income communities, communities of color, indigenous communities, rural and urban communities and the front-line communities most affected by climate change, pollution and other environmental harm including by ensuring that local implementation of the transition is led from the community level.”

More, Ocasio-Cortez sees this plan is being a vehicle through which social equality might finally realized through the use of reparations to right historical injustices. The final Green New Deal will “mitigate deeply entrenched racial, regional and gender-based inequalities in income and wealth (including, without limitation, ensuring that federal and other investment will be equitably distributed to historically impoverished, low income, deindustrialized or other marginalized communities in such a way that builds wealth and ownership at the community level).”

(a) Establishment of the Select Committee For A Green New Deal.—

(A) ESTABLISHMENT.—There is hereby established a Select Committee For A Green New Deal (hereinafter in this section referred to as the “select committee”).

(i) The select committee shall have authority to develop a detailed national, industrial, economic mobilization plan (hereinafter in this section referred to as the “Plan for a Green New Deal” or the “Plan”) for the transition of the United States economy to become greenhouse gas emissions neutral and to significantly draw down greenhouse gases from the atmosphere and oceans and to promote economic and environmental justice and equality. In furtherance of the foregoing, the Plan shall: (a) be prepared in consultation with experts and leaders from business, labor, state and local governments, tribal nations, academia and broadly representative civil society groups and communities; (b) be driven by the federal government, in collaboration, co-creation and partnership with business, labor, state and local governments, tribal nations, research institutions and civil society groups and communities; (c) be executed in no longer than 10 years from the start of execution of such Plan; (d) provide opportunities for high income work, entrepreneurship and cooperative and public ownership; and (e) additionally, be responsive to, and in accordance with, the goals and guidelines relating to social, economic, racial, regional and gender-based justice and equality set forth in paragraph (6).

(B) INVESTIGATIVE JURISDICTION.—In  furtherance of the mandate set forth in paragraph (2)(A), the select committee shall have the authority to investigate, study, make findings, convene experts and leaders from industry, academia, local communities, labor, finance, technology and any other industry or group that the select committee deems to be a relevant resource. The select committee may, at its discretion and as its members may deem appropriate, hold public hearings in connection with any aspect of its investigative functions.

(ii) Service on the select committee shall not count against the limitations on committee or subcommittee service in Rule [to be confirmed by reference to overall House Rules package] (Organization of Committees).

(4) FUNDING.—To enable the select committee to carry out the purposes of this section—

(C) Without limiting the foregoing, the select committee may, at any time and from time to time during the course of its mandate, apply to the House for an additional, dedicated budget to carry out its mandate.

(A) The select committee may report to the House  or any House Committee it deems appropriate from time to time the results of its investigations and studies, together with such detailed findings and interim recommendations or proposed Plan or draft legislation (or portion thereof) as it may deem advisable.

(B) (i) The select committee shall complete the Plan for a Green New Deal by a date no later than January 1, 2020.

(iii) The select committee shall ensure and procure that the Plan and the draft legislation prepared in accordance with this section shall, upon completion in accordance with paragraphs (5)(B)(i) and (ii), be made available to the general public in widely accessible formats (including, without limitation, via at least one dedicated website and a print publication) by a date no later than 30 calendar days following the respective dates for completion set forth in paragraphs (5)(B)(i) and (ii).

(6) SCOPE OF THE PLAN FOR A GREEN NEW DEAL AND THE DRAFT LEGISLATION.—

(A) The Plan for a Green New Deal (and the draft legislation) shall be developed with the objective of reaching the following outcomes within the target window of 10 years from the start of execution of the Plan:

(B) The Plan for a Green New Deal (and the draft legislation) shall recognize that a national, industrial, economic mobilization of this scope and scale is a historic opportunity to virtually eliminate poverty in the United States and to make prosperity, wealth and economic security available to everyone participating in the transformation. In furtherance of the foregoing, the Plan (and the draft legislation) shall:

(C) The Plan for a Green New Deal (and the draft legislation) shall recognize that innovative public and other financing structures are a crucial component in achieving and furthering the goals and guidelines relating to social, economic, racial, regional and gender-based justice and equality and cooperative and public ownership set forth in paragraphs (2)(A)(i) and (6)(B). The Plan (and the draft legislation) shall, accordingly, ensure that the majority of financing of the Plan shall be accomplished by the federal government, using a combination of the Federal Reserve, a new public bank or system of regional and specialized public banks, public venture funds and such other vehicles or structures that the select committee deems appropriate, in order to ensure that interest and other investment returns generated from public investments  made in connection with the Plan will be returned to the treasury, reduce taxpayer burden and allow for more investment.

Why do we need a sweeping Green New Deal investment program? Why can’t we just rely on regulations and taxes alone, such as a carbon tax or an eventual ban on fossil fuels?

Why should the government have a big role in driving and making any required investments? Why not just incentivize the private sector to invest through, for e.g., tax subsidies and such?

How will the government pay for these investments?

Why do we need a select committee? We already have committees with jurisdiction over the subject matter e.g. Energy and Commerce, Natural Resources and Science, Space and Technology.  Just creating another committee seems unnecessary.

Why should we not be satisfied with the same approach the  previous select committee used (i.e. the Select Committee on Energy Independence and Global Warming)? Why do we need a new approach?

What’s an example of a select committee with abilities to prepare legislation? Does the new Select Committee For A Green New Deal seem to fit on that list?

Doesn’t this select committee take away jurisdictional power from the other (standing i.e. permanent) committees that have jurisdiction over at least part of the issue?

What’s wrong with the other proposed legislation on climate change? Can’t we just pass one of the other climate bills that have been introduced in the past? Why prepare a whole new one?

She is a nutbag, pure, plain, and simple !