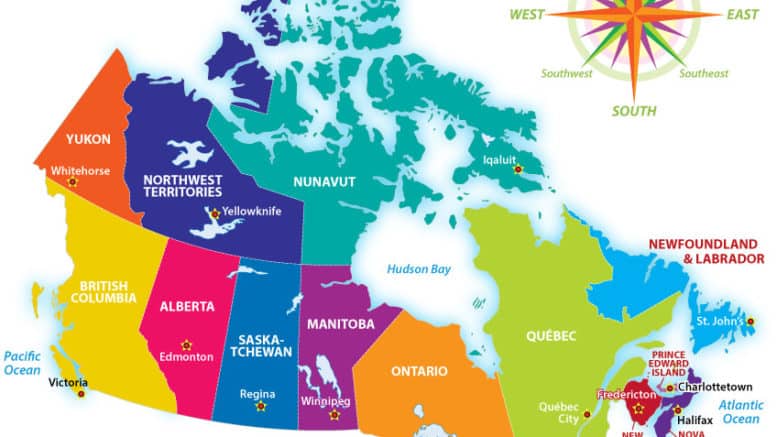 Please Share This Story!
PDF 📄
Borders most often change with geo-political pressures in one direction or another, and Canada may not be immune to such changes. Current political trends are extremely disruptive and may force historic changes.  ⁃ TN Editor

There are always forces operating on anything that exists. You can divide these into two categories, centrifugal forces that cause it to disintegrate, and centripetal forces that hold it together. Ideally, those forces are in balance, but with change, the only constant, adjustments become inevitable. The forces existing when they created Canada are out of balance because it is geographically not the same country if nothing else. The basic principle I taught students of geopolitics is that geography is the stage on which history is played out. You can study history or geography separately, but they only work effectively when studied together ⁃ TN Editor [/su_note]  ⁃ TN Editor [/su_note]

The map shows the natural north/south orientation of the continent depicted by the four finer arrows pointing south. From left to right they indicate the Rocky Mountains, the Great Plains, the Great Lakes Basin, and the Appalachian Mountains. The two arrows pointing north indicate the great drainage basins of the Mackenzie in the west and the Churchill- Nelson systems that flow north to the Arctic.

The Canada/US boundary cuts right across these natural regions. Ideally, if a political boundary is going to survive, it must coincide with a physical boundary.

For example, there are only four boundaries in Europe in existence for over 100 years. These are

This separation of Canada from the US by water boundaries is no accident. In the east people who didn’t want to be part of the new Republic formed in the US and moved across the St Lawrence River to create the fledgling country of Canada. Because they were in favor of monarchy and the British Empire, they were called United Empire Loyalists. In the west, they established the boundary in 1670 when Charles II granted all the land flowing into Hudson Bay to the Hudson’s Bay Company. (This is one of the quirks of history – For some reason. Hudson Bay was named after Henry Hudson but without the proper possessive name ‘Hudson’s’. The Company registered legally as the Hudson’s Bay Company). I attended a Fur trade Conference in Calgary years ago when an academic made that comment. A First Nation person shouted out “Who gave him permission to do that?” The answer was just as big a surprise. European colonial powers believed if a group of people could not read or write they lacked the skills and tools necessary to form a civilization.

Canada formed in the eastern half of the current nation, and the same situation existed in the US. The degree to which this dominates the thinking is in the terminology we use.  Canadians refer to Central Canada, which is actually the center of Canada before they added the west. Americans refer to Chicago as a Midwest city when it is actually middle of the east. It got that name when the Appalachian Mountains were the boundary between eastern and western America.

Both countries expanded west with a variety of additions including purchased territory, land won after a conflict, and simple squatting. Each new region had different geography and history, and much of it had an indigenous population. They ignored these when boundaries, including the Canada/US, were superimposed. The compromise, which created more problems as time went by, said the border did not exist for them because there was an existing agreement made with Queen Victoria.

There are two methods for establishing boundaries. They follow natural physical features like rivers, lakes, mountains or an ocean coastline, or, they are geometric, usually straight and mostly of latitude and longitude. The internal boundaries in the US and Canada are almost all geometric straight lines that ignore natural variations.

One of the few natural boundaries in Canada is the southern half of the Alberta/BC border. All the others are a geometric straight line that follow latitude or longitude. Only one of these was based on a natural reality, and that is the northern boundary of the Prairie Provinces at 60° latitude. The government of the day still had some common sense and ruled that a political region can only sustain itself if there is an agricultural base. Thomas Jefferson explained,

“The pursuits of agriculture [are] the surest road to affluence and best preservative of morals.”

They ruled that agriculture was not possible north of 60° because of the lack of soil. Permafrost, permanently frozen ground, precluded agriculture in what little soil existed around Hay River. They called all the regions north of 60° Territories and kept them under the control of the federal government.

This situation continued until one of those indigenous groups, the Inuit, decide to determine their survival. It is ironic that they were recognized because it was the federal government that created them, an action many of them opposed. Opposition was based on the fact that they are not a single cultural group. Of course, they were talked about as a single group when Europeans referred to them as Eskimos. If you are interested in the history of the circumpolar indigenous people and their contacts with Europeans in Canada, I recommend Rene Fossett’s book “In Order to Live Untroubled.” They achieved some autonomy in 1999 when The Nunavut Land Claims Agreement Act created Nunavut.

Notice the boundary is part latitude and part physical off the coast. I was briefly involved in the establishment of the land boundary because they wanted to use the tree line, which is approximately along the line they chose. It was an historic division between the Eskimos and the Denai people, the collective names given to those on each side. They are historical enemies with conflict occurring when the Eskimos came inland, and the Denai people move out of the boreal forest to hunt the Barren Ground Caribou. The problem with the tree line as a physical boundary is that it moves with climate change over time. For example, it moved at least 200 km between 1772 when Samuel Hearne put it on his map and 1972 when a modern researcher identified it. They could not agree on that portion of the border, so it took a Federal government imposition.

They broke the rules when they established Nunavut. There is no soil anywhere in this vast area, which at 1,750,000 square kilometers makes it the 18th largest country in the world. It is approximately the same size as Sudan, the largest country in Africa.

Incidentally, Hearne’s map is valuable because of aboriginal land claims. The concept of private ownership of land by every citizen did not exist until the creation of America. Lawyers and academics argue that Magna Carta was about private ownership of land. It was nothing of the sort. It was a group of powerful feudal landowners unhappy with the way the King was treating them. They didn’t give a hoot for the peasants living on their land without any rights at all. It continues today. Five people own almost half of Britain, and two of them are the Queen and her son Charles. Another is the Duke of Westminster who owns a large portion of the City of London.

There were many proposals over the years to redraw Canada’s internal boundaries. For example, a BC senator proposed eliminating the 60° parallel of latitude boundary and extending the southern provinces to the Arctic coast. Notice that the Province that benefits most from this is BC because it would then combine with the Yukon Territory. That is the only portion of Canada north of 60° with forest and grassland right to the Arctic Ocean. This change is no longer possible with the development of Nunavut.

Other boundaries that are problematic regarding geography and demographic transitions include the Maritime provinces. These do not include Newfoundland and Labrador. They are called the Atlantic Provinces when both groups are combined. I am not in favour of making bigger countries or bigger administrative units, but approximately equal representation is required. The Founding Fathers in the US tackled this head-on by making Congress proportionally representative and the Senate with equal representation with two Senators per State. They also created a two-tier election system, with the popular vote and the Electoral College. The latter was created to prevent the most populace States dominating and dictating to the smaller States. In Canada, we don’t have a sensible representative system because our Senate is by appointment and effectively has no power. We don’t get to vote for the Prime Minister and some Provinces, such as Prince Edward Island (PEI), are illogical as representative political units. With a population of 142,907 (2016), it is smaller than 33 cities in Canada, yet it has four members of Parliament and four Senators. By comparison, PEI is 5,660 km2 while Vancouver Island is 32,134 km2 with 775,347 people in 2016. But it isn’t just the population numbers, because PEI has three levels of government to support, which probably means that well over 50% of the population work for one of the levels.

As the country expanded west, political leaders saw the potential for a large hinterland providing food and raw materials to the east. One of the best ways to tie these regions together and exploit the resources was with a railway. It became the small steel reinforcing rod of an expanding Canada. However, roads and railways go in both directions, and gradually more and more people moved west or came directly from Europe to the west. Many of these people were of a different mindset with a more American frontier view of risk-taking and a desire for individual freedom and less government. A new western view developed that peaked first with a movement to western separatism under Pierre Trudeau’s growing Federal government power. Between the elder and the younger Trudeau, the dynamics changed completely. The railway was no longer important for passengers or freight. The original bottleneck at the Lakehead referred to by fur traders as the height of land became a boundary between east and west. Almost all the grain and produce shipped from west to east was now going west or south. In effect both halves of the country turned their backs on each other, so the forces are now as in the new map.

The term used for the idea around which they create a country is raison d’etre. For America, it is the supremacy of the individual. What is it for Canadians? Originally, it was a group of people who did not want to be Americans. Is a negative raison d’etre an adequate reason? The answer to that question came under increasing focus as the country changed its geography and demography and natural forces continued their influence and asserted realities. The question won’t go away and will require some real soul-searching as change inevitably continues.

Canada has also always been a colony except perhaps when national leaders decided to nation build using the Bank of Canada as the catalyst. roughly 1937 to 1974. Internally the people of Canada have always been treated as tenet citizens. If there is a west – east divide it has been created intentionally by the business clique that runs the place and keeps their motives hidden. The economics of Canada run by its colonial rulers, within and from outside Canada likely have bigger plans that involve a North American Union and what better way to get the people of Canada… Read more »