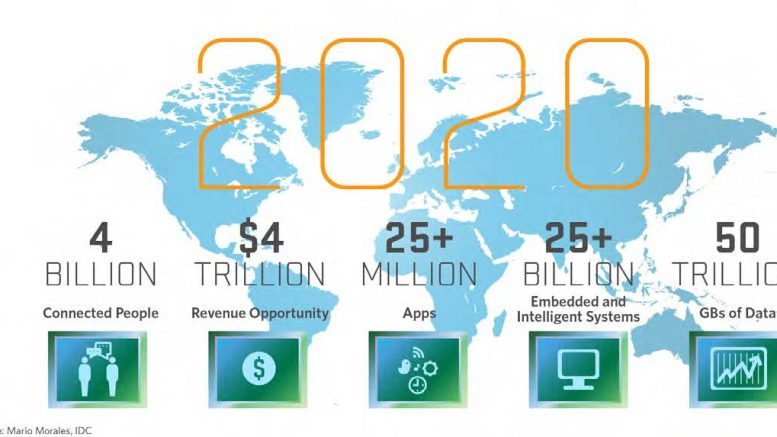 The IoT connects inanimate objects and humans in real time in order to monitor all facets of the societal machinery. Technocrats are at the heart of it, with the intent of fulfilling Technocracy. ⁃ TN Editor

The modern-day space race for metropolitan areas to earn the title of “smart city” is in full swing. Among the world’s top contenders are Barcelona, Singapore, Seoul, London and New York, which are leading the way in the introduction of smart technologies and applications to improve sustainability, system automation, quality of life and other key areas critical to urban centers and communities.

It’s predicted that 60 percent of the world’s population will live in a metropolis by 2030, prompting much conversation on smart technologies and the roles they’ll play in these growing urban centers. The media paints exciting images of futuristic concepts and cities that are deploying smart city apps today. What’s glossed over, however, is the internet of things “glue” holding these smart cities together:  in particular, the robust, compatible networks specifically designed to enable communication across a myriad of sensors embedded in nearly everything.

Along with IoT networks, benchmarking (read: performance measurement) is necessary to check status, monitor upgrades and ensure IoT stability and performance. Routine testing and monitoring of these networks are critical to catching faults before they impact any service that a municipality provides to residents and businesses. In addition to measuring the health of the current networks, benchmarking also tracks performance before and after new component additions and software upgrades.

Today’s mobile-first society depends on wireless connectivity. In smart city, networks are integrated and always communicating; as a result, reliable connectivity plays a significant role in the efficiency and effectiveness of various systems that make up such cities. The accumulation and analysis of information collected from the networks — from end-user behavior, sensors and other telemetry sources — facilitates business and residential solutions, as well as public policy.

Reliability is critical to success and the delivery of what smart cities have to offer. Take the previous example on mass transit; integrated machine-to-machine communicationwith a stable connection is a key operational component. Connected trains must seamlessly transmit signals about status, delays, schedule changes or closings to deliver the core service of moving people and goods. Further, reliable M2M will be a cornerstone of the autonomous vehicle revolution where cars will require constant, always-on guidance to prevent congestion and ultimately ensure road safety.

The IoT will play an important role in how smart cities manage their energy consumption. IoT systems can very effectively monitor and control heating and air-conditioning systems, lighting and other energy consuming systems.

and one little solar flare? sorry, but I think the focus is incorrect.. you want sustainable? .. try farming.. non-GMO, natural seed sourcing, non-pesticidal, non-germicidal, non-herbicidal food production.. because unless you can feed all these people, you won’t have a sustainable city.. period! Small farm revitalization is necessary, as the larger the farm, generally the less attention to healthy product.. then as being done in China, turn those high rises into plant towers, preferably food bearing plants.. and require horticulture classes in every school as a basic life supporting skill.. demand community gardens in every open civic area and ensure… Read more »