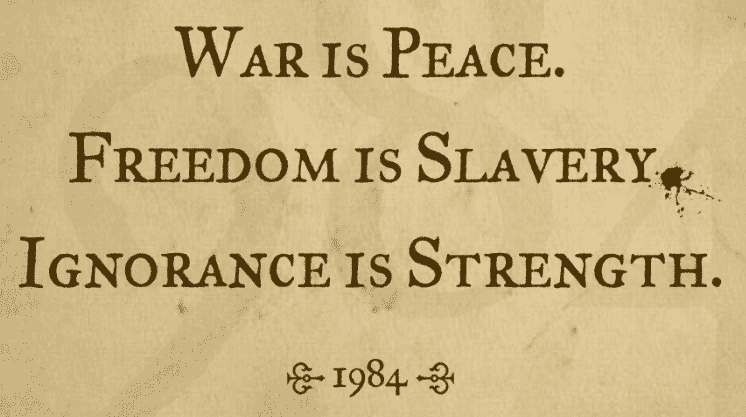 Orwell understood the Technocrat mind: “So ‘enlightened’ that they cannot understand the most ordinary emotions.” Today, this is the norm among would-be social engineers who think it their right or obligation to control everything and everyone in the environment. ⁃ TN Editor

George Orwell’s novel 1984 has been selling in large numbers to people scared of a lurch toward 2345 authoritarianism in the USA. I recently noted that both that book and Animal Farm were written not as a warning against a particular political ideology but against the implementation of any ideology, however progressive, by people who think themselves too smart to have to test their politics against the emotions, sentiments, and experiences of those they would affect.

In his essay, My Country Right or Left, Orwell referred to such people as:

“so ‘enlightened’ that they cannot understand the most ordinary emotions.”

He understood that the morality of a political ideology in practice cannot be determined from its theoretical exposition – but only from the actual experiences of those who would be affected by its real-world application.

To make the point to the people he felt most needed to hear it, Orwell, a self-identified socialist, called out the arrogance of his friends on the Left who experienced themselves as so “enlightened,” to use his word, that they did not need to consider the sentiments – let alone ideas – of those who were to them clearly politically ignorant.

Orwell had a name for this kind of self-righteous certainty – and it wasn’t fascism, capitalism, or communism.  It was “orthodoxy,” which he explains in 1984, “means not thinking—not needing to think. Orthodoxy is unconsciousness.” It is a state exhibited by people who already know they have the right answers – at least in the areas that matter.

There is no political system so perfect that it will not be deadly when imposed against the will of others by people sure of their own righteousness. Orwell saw that no political theory – even the egalitarian socialism that he believed to be the most moral – can prevent its adherents from being anything other than tyrants if they are committed to it in a way that is immune to the protests and experiences of other people.

The Epistemology of Political Ideologies

To understand tyranny, then, we need to think a bit less about politics, and a bit more about epistemology.

Epistemology concerns the nature of knowledge, and especially its formation, justification, and scope. Accordingly, the word “epistemic” means “relating to knowledge or the degree of its validation”.

We may be able to identify one ideology as more consistent with freedom than another, but that is just an academic exercise if in practice it is the nature of the commitment to the ideology, rather than the content committed to, that leads to authoritarianism.

As Yogi Berra rather nicely put it:

“In theory, there’s no difference between theory and practice; but in practice, there is.”

Can we identify an epistemology of tyranny? Is there a mechanism by which a certain kind of cognitive commitment to a political or moral theory might cause someone willingly to harm others in its pursuit; prevent them from seeing the harm they are doing, or even make invisible to them the data that would demand a revision of their beliefs to better reflect human experience and lead to outcomes more aligned with their stated goals?

Such fundamental questions concern our ability to form knowledge and change their opinions and so both depend on, and reveal, much about human nature. And since human nature doesn’t change, we shouldn’t be too surprised to find that history provides a useful guide in answering them.

Orwell referred sarcastically to the “enlightenment” of people who are rather less enlightened than they believe themselves to be.

At first blush, then, it may appear to be a rather remarkable coincidence that the period of history that perhaps sheds light on what makes commitment to ideology dangerous is the Enlightenment. (But we’ll soon see that it isn’t a coincidence at all.)

In the latter part of the 17th century, René Descartes, Isaac Newton, and myriad other intellectual giants were making a whole new world.

In Principia Mathematica, published in 1687, Newton presented the Laws of Motion, the theory of gravity and even a set of “Rules for Reasoning in Philosophy.” His work explained and predicted an infinity of (although by no means all) phenomena that had theretofore been mysterious. In providing a coherent means of understanding many complex phenomena in terms of a few axioms and principles, he made tractable a huge swathe of the world.

In as much as Newton’s theories substantially described and predicted things that had not been accurately described or predicted before, they were both true and useful – or, at least they were much “truer” than any understanding of the world that had come before it.

Newton was doing physics, but his work clearly implied a certain metaphysics. Newton’s explanations, and therefore the underlying reality, were deterministic – meaning that if you knew the laws that governed things and their state at one instance, then you could predict in principle their motions and states at all times. They rested on common-sense, observable, causation – meaning that a specific cause necessarily leads to a specific effect. They used a common-sense framework of time and space, in which a foot is always a foot and a second is always a second, everywhere and always. In one fell swoop, Newton’s work eliminated the need for any non-physical explanations of a huge number of terrestrial and celestial phenomena.

It was better than what came before it because whereas, say, the Church’s explanatory entities (God, the saints, the soul) failed to explain why the world operated as it did rather than any other way, Newton’s explanatory entities (force, mass etc.) did exactly that. And did so with precision in a manner that could even be used to steer the world towards specific outcomes.