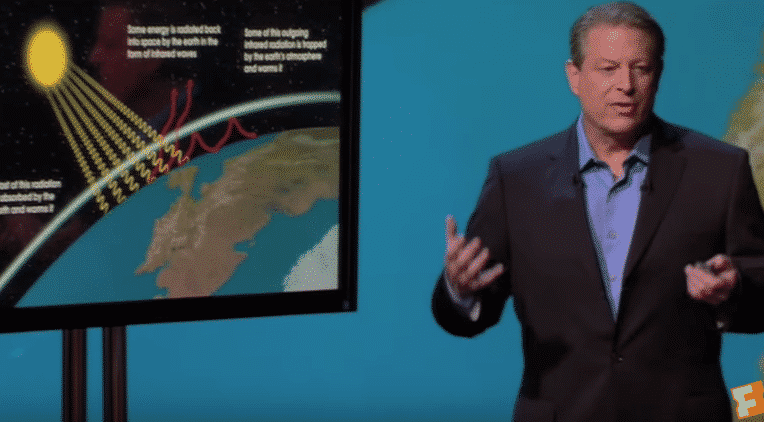 TN Note: Al Gore, former member of the Trilateral Commission, has long been the global elite’s principal spokesman and evangelist for Global Warming. However, Global Warming is nothing more than the “flash-bang” to stampede the world into adopting Sustainable Development while destroying Capitalism and Free Enterprise. With the crumbling science of man-made climate change, advocates must shout louder and more often to keep the doctrine alive.

Miami (AFP) – Nobel Peace Prize winner Al Gore is busily training an army of organizers to go out and spread his environmental gospel ahead of key climate talks in Paris later this year.

The modern world is collapsing around us and we must change our ways, according to the former US vice president, who has led the training of more than 5,000 people in the last 18 months.

At each session, he delivers an updated version of his Academy Award-winning documentary “An Inconvenient Truth,” using the latest news footage and startling videos to show how the very fossil fuels that have powered so much innovation are leading to the demise of society.

Air so hot it melts airport runways, floodwaters that crumble roads and bridges, methane that blows terrifying holes in Siberia and air pollution so thick it has shortened life expectancy in China by several years featured prominently during his three-hour presentation in Miami this week.

“The world that we have built was built for different conditions,” Gore told about 1,000 people who came from 80 countries to attend the three-day climate training session.

At times, he lamented killer heat waves, parching drought, a media that doesn’t connect the dots between extreme weather and global warming, and what he called “crazy short-term thinking” among politicians who deny that climate change is occurring.

Of all the idiots screaming global warming, this guy is the most inaccurate liar of the bunch. Thanks for keeping us up to date on his latest scam.

Gore doesn’t even believe his own words. He bought a multimillion dollar condo in the Bay Area, in the very zone he says will be underwater soon.