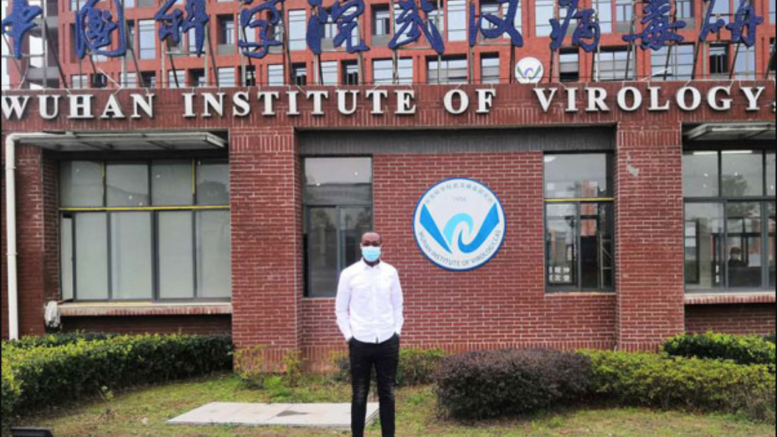 (This is NOT the expert mentioned in the article!)

Please Share This Story!
PDF 📄
Technocrat scientists around the world are using CRISPR technology in top-secret labs to develop doomsday-type biological warfare weapons. The Wuhan Institute of Virology is such a center, and the most likely source of the coronavirus outbreak.

TN does not endorse either GreatGameIndia or Dr. Francis Boyle, but the globalist censorship is notable and significant. For instance, the globalist publication, Foreign Policy, strongly refuted the “conspiracy theory” on January 29 with the headline, The Wuhan Virus Is Not a Lab-Made Bioweapon, and attacked GreatGameIndia and ZeroHedge in particular. ZeroHedge has been permanently banned from Twitter.  ⁃ TN Editor

In an explosive interview Dr. Francis Boyle, who drafted the Biological Weapons Act has given a detailed statement admitting that the 2019 Wuhan Coronavirus is an offensive Biological Warfare Weapon and that the World Health Organization (WHO) already knows about it.

Francis Boyle is a professor of international law at the University of Illinois College of Law. He drafted the U.S. domestic implementing legislation for the Biological Weapons Convention, known as the Biological Weapons Anti-Terrorism Act of 1989, that was approved unanimously by both Houses of the U.S. Congress and signed into law by President George H.W. Bush.

In an exclusive interview given to Geopolitics and Empire, Dr. Boyle discusses the coronavirus outbreak in Wuhan, China and the Biosafety Level 4 laboratory (BSL-4) from which he believes the infectious disease escaped. He believes the virus is potentially lethal and an offensive biological warfare weapon or dual-use biowarfare weapons agent genetically modified with gain of function properties, which is why the Chinese government originally tried to cover it up and is now taking drastic measures to contain it. The Wuhan BSL-4 lab is also a specially designated World Health Organization (WHO) research lab and Dr. Boyle contends that the WHO knows full well what is occurring.

Dr. Boyle also touches upon GreatGameIndia‘s exclusive report Coronavirus Bioweapon – where we reported in detail how Chinese Biowarfare agents working at the Canadian lab in Winnipeg were involved in the smuggling of Coronavirus to Wuhan’s lab from where it is believed to have been leaked.

Watch Dr. Francis Boyle’s interview with Geopolitics and Empire below:

Dr. Boyle’s position is in stark contrast to the mainstream media’s narrative of the virus being originated from the seafood market, which is increasingly being questioned by many experts.

In a video accompanying his post, Cotton explained that the Wuhan wet market (which Cotton incorrectly referred to as a seafood market) has been shown by experts to not be the source of the deadly contagion.

Cotton referenced a Lancet study which showed that many of the first cases of the novel coronavirus, including patient zero, had no connection to the wet market — devastatingly undermining mainstream media’s claim.

“I would note that Wuhan also has China’s only bio-safety level four super laboratory that works with the world’s most deadly pathogens to include, yes, coronavirus.”

Such concerns have also been raised by J.R. Nyquist, the well known author of the books “Origins of the Fourth World War” and “The Fool and His Enemy,” as well as co-author of “The New Tactics of Global War”. In his insightful article he published secret speechs given to high-level Communist Party cadres by Chinese Defense Minister Gen. Chi Haotian explaining a long-range plan for ensuring a Chinese national renaissance – the catalyst for which would be China’s secret plan to weaponiz viruses.

The third data point worth considering: the journal GreatGameIndia has published a piece titled “Coronavirus Bioweapon – How China Stole Coronavirus From Canada And Weaponized It.”

This is one aspect of the China pandemic that puzzles me and no one has yet adequately addressed. I am very well acquainted with the fact that the Chinese are capable of constructing amazing building complexes quickly, but… In response to the Wuhan pandemic the Chinese government is constructing two massive hospitals from the ground up in ten days. I am a retired civil engineer (P.E.) with over forty years of large project experience. Several serious questions come to mind: 1. How would you quickly staff and manage two hospitals of this size? 2. How did they survey, design and… Read more »

Thank you! I, too, wondered how in the world they were building those hospitals abs getting them up and running so fast!

Do we really know what is going on? No we don’t.
For an excellent perspective on the Coronavirus, from a journalist that correctly and rationally covered SARS, SWINE, more…

Go to NoMoreFakeNews.Com and and read

“My bottom lines on the China epidemic” Feb 5

how does the vaccine work with a supposedly “dead” virus? Aren’t viruses able to be dormant for long periods of time?

Why should China spread the Coronavirus in its own land? What land build a Bio-Lab in Georgia but doesn’t take any responsibility concerning accidents or financial risks?

Mr. Verbuyst – The Chinese did NOT intend to release the virus from their own lab. One of their staff members obviously failed to follow standard protocol and the bug “escaped”.

#1 Exhort taxes from the people.
#2 Use the people’s money to make weapons
#3 Use weapons against the same people who paid for them
#4 Continue to stuff your sorry worthless gut with food in a well-protected shelter/bunker all paid for by same people. Yeah, sounds about right.

I am very grateful to you for reporting this information! However, I do think it would lend to your credibility as a resource if you had someone editing articles prior to posting? There are several spelling errors in this article. There are some great services that will edit for you, or for your entire page, for a small fee. I think that would help a lot! I apologize for having to mention this, but I run a page as well, and I know that people will point out when the smallest of errors. It is an easy wait to gain… Read more »

Thank you for commenting. I do have a couple of editing eyes for the material that I write, but when posting articles sourced elsewhere, the text is almost invariably taken ‘as is’ and not edited. Also, there are notable differences between American and British versions of our language that make some people scratch their head.

President Trump needs to immediately set up a program to evaluate and confine this assult from China on America and the world. It should be #1 item on congressional agenda. We can’t wait till it reaches levels in China !!!

People think there are two separate countries called China and America. People think they are historical adversaries who do not like to work together, that they are two separate realms, the east and the west and ‘n’er the t’wain shall meet.’ People think they are communists and we are a democracy. What if I told you there are no nations, no borders, no races, only people living on the earth. Would that make it easier for people to see how the people who run these puppet shows called government could be working together using their installed political structures in the… Read more »