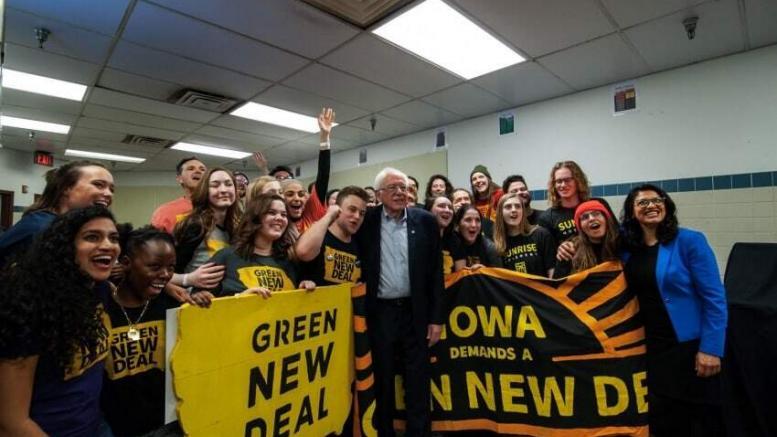 Please Share This Story!
PDF 📄
Whether Sanders wins the Democrat nomination or not, the Green New Deal mania in America will have been established and burned into the minds of young socialist zealots who will soldier on to transform America into Sustainable Development, aka Technocracy.

The ‘Squad’ and its followers do not understand that Technocracy and Socialism do not mix and that they are being used (think “useful idiots) to promote a complete transformation of the world’s economic system that will be run by Technocrats, not Socialists. If history is a guide, the Socialists will be the first to be thrown under the bus when Technocracy takes over. ⁃ TN Editor

Together, Sanders and Tlaib turned out hundreds of people to a town hall meeting in Davenport on Saturday and 900 to a Sunday rally in Iowa City centered on combating climate change.

The two stops were the first public appearances in Iowa for Rep. Tlaib, a Palestinian-American lawyer, mother, Muslim and first-term congresswoman from Detroit.

“Social justice is love and we are going to create an incredible new America that is about all of us,” Tlaib said at St. Ambrose Catholic University in Davenport. “I’m so happy to be here on behalf of our future president of the United States, Bernie Sanders.”

Sanders returned the praise, telling the Davenport crowd that, unlike the Trump administration, his campaign stands for “a government of love and kindness, not hate and divisiveness”—and that he shared these values with Tlaib “and the other members of the so-called Squad.”

“I know these guys and they are out there every day standing up for the working families of this country,” Sanders said.

According to the Sierra Club, “A Green New Deal is a big, bold transformation of the economy to tackle the twin crises of inequality and climate change.” It’s notable that Sanders and his backers are mobilizing around the plan in Iowa, as such an approach for a novel idea could help increase public support.

Tlaib made the urgency of the Green New Deal personal during both of her Iowa stops, relating the need for change to the plight of thousands of children and families in her west Detroit district, where working people of color face disproportionately high rates of air and water pollution, asthma and cancer.

“If you really want to see what doing nothing truly looks like, come to my district,” she said in Iowa City. “Rows and rows and rows of homes have these little white crosses in front of them, representing cancer, survivors of cancer.”

Rep. Ro Khanna (D-Calif.), a Sanders campaign co-chair, also spoke at the Iowa City climate rally. He pointedly criticized the ongoing wars in the Middle East while promoting Sanders’ lifetime of opposition to imperialism, as well as his support for climate initiatives.

“I was just in Clinton, Iowa and you know what they told me there?” Rep. Khanna asked in Iowa City.

“They have the highest cancer rate in the state because of the sulfur dioxide emissions. Do you know what Bernie’s Green New Deal means? It means people in Clinton, Iowa shouldn’t have to worry about whether their kids will grow up with cancer. That’s what the Green New Deal is about.”

Varshini Prakash, executive director of the Sunrise Movement, said that Sanders’ first presidential campaign in 2016 emboldened a new generation of young people to stand up and take action for climate justice.

Ms. Prakash’s speech in Iowa City was also her first public statement since the Sunrise Movement endorsed Sanders for president a few days earlier. She said in Iowa: “Eighty percent of our members endorsed Bernie Sanders because he stands for a Green New Deal… the kind of Green New Deal that ensures black, brown, and indigenous people benefit from a new, sustainable economy, and that the historic injustices that have been perpetrated onto these communities are repaired.”

Many of these ambitious policy prescriptions could also be part of a strong Green New Deal framework that advances environmental, economic and racial justice all at once. For example, affordable housing could be tackled under a Green New Deal by building 12 million new, environmentally sustainable and affordable homes, as put forward by People’s Action’s Homes Guarantee. Similarly, a Medicare for All bill could include green retrofitting of hospitals and clinics. Such proposals would also help create millions of jobs.

“We are fighting to save the planet,” Sanders said in Iowa City. “We have already seen the real damage of climate change here in Iowa, where record-breaking rainfalls have led to floods, millions of dollars in damages, and the delayed planting of hundreds of acres of farmland.”

A plague of scientific illiteracy Abounds.