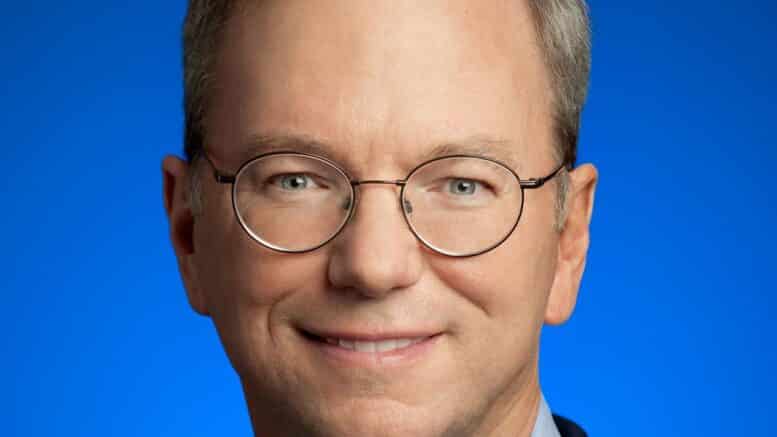 Please Share This Story!
PDF 📄
Former CEO of Google, Chairman of Alphabet and current member of the elitist Trilateral Commission, he is also Chairman of The National Security Commission on Artificial Intelligence. Is Cyprus citizenship a conflict of national interest? ⁃ TN Editor

The former CEO of Google, Eric Schmidt, is finalizing a plan to become a citizen of the island of Cyprus, Recode has learned, becoming one of the highest-profile Americans to take advantage of one of the world’s most controversial “passport-for-sale” programs.

Schmidt, one of America’s wealthiest people, and his family have won approval to become citizens of the Mediterranean nation, according to a previously unreported notice in a Cypriot publication in October. While it is not clear why exactly Schmidt has pursued this foreign citizenship, the new passport gives him the ability to travel to the European Union, along with a potentially favorable personal tax regime.

The move is a window into how the world’s billionaires can maximize their freedoms and finances by relying on the permissive laws of countries where they do not live. Schmidt’s decision in some ways mirrors that of another famous tech billionaire, Peter Thiel, who in 2011 controversially managed to secure citizenship in New Zealand.

Interest from Americans in non-American citizenship has been spiking during the coronavirus pandemic, which has sharply limited Americans’ ability to travel overseas. Experts say some of that increase is also due to concerns about political instability in the United States.

But it is still uncommon to see Americans apply to the Cyprus program, according to published data and citizenship advisers who work with the country. The program is far more popular with oligarchs from the former Soviet Union and the Middle East, and it has become mired in so many scandals that the Cypriot government announced last month that it was to be shut down.

A representative for Schmidt declined to comment on the move or Schmidt’s thinking.

The Cyprus program is one of about a half-dozen programs in the world where foreigners can effectively purchase citizenship rights, skirting residency requirements or lengthy lines by making a payment or an investment in the host country. They have become the latest way for billionaires around the world to go “borderless” and take advantage of foreign countries’ laws, moving themselves offshore just like they might move their assets offshore, a phenomenon documented by the journalist Oliver Bullough in the recent book Moneyland.

Small, financially struggling countries — beginning with St. Kitts and Nevis in the Caribbean — have embraced the idea over the last few decades, raking in money that they would otherwise never see in exchange for citizenship papers. But what can be good for one country can be bad for the world: Anti-corruption activists have grown deeply worried about a race to the bottom with these programs, concerned that criminals can purchase foreign citizenship to escape prosecution in their home countries, or to funnel drugs through friendly borders, or to hide their assets from tax authorities.

The Cyprus program in particular — despite helping save the country after its 2013 bankruptcy by bringing in $8 billion since then — has become notorious.

The lion’s share of the 4,000 Cypriot citizenship recipients since 2013 have been wealthy individuals from Russia, according to people who advise these individuals on obtaining Cypriot citizenship. It has historically not even been marketed to Americans, whose passports usually allow them to travel freely in Europe. It is not unheard of, however, for Americans to take advantage of the program, and advisers say it has been happening more frequently over the last few months.

The EB-5 “millionaire green card” can be purchased here in the USA … You knew about this, right?