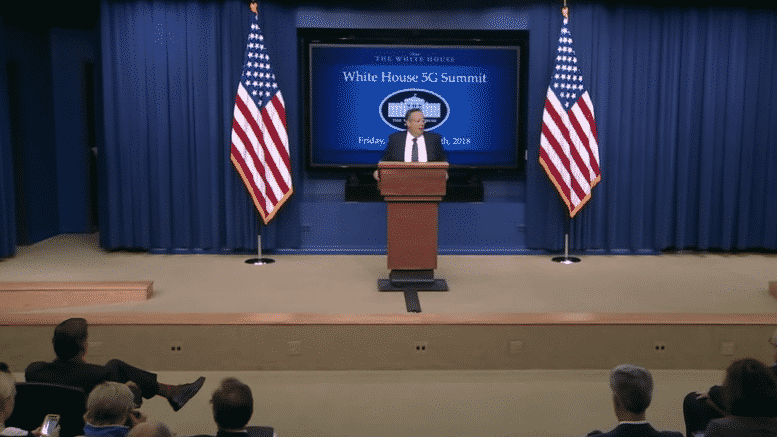 The 400 comments received in three days are overwhelmingly AGAINST the rollout of 5G.

The Administration is rife with Technocrat thinking on 5G. The Director of the National Economic Council blames states and cities for getting in the way of 5G rollout and must be stopped. He says the FCC ruling is not meant to trample on the sovereignty of cities and states, but it does. This is deemed necessary because in order to beat China, we must be more like China. ⁃ TN Editor

At a White House summit on the technology, elected officials pledged to partner with businesses and help the country move ahead of China and South Korea.

If the United States is to be a world leader in 5G technology, it must get government out of the way and allow the private sector to take the lead, officials said last week.

Elected officials that attended a Friday summit on 5G at the White Housesaid it is up to telecom companies to help make sure that the likes of China and South Korea do not pull further ahead, while government must do all it can to not obstruct that innovation.

“There’s two paths,” Larry Kudlow, director of the National Economic Council, said in a speech at the summit. “One path is the government regulatory path, which we do not favor. The other path is the private enterprise, free market path.”

The Federal Communications Commission (FCC) approved a plan last week to streamline the deployment of 5G infrastructure like small cells and cap the fees that cities and other local governments can charge telecom companies to install that infrastructure.

Opponents said it undermines technology initiatives funded by those fees, and local control under the federal Telecommunications Act, with cities and governmental organizations promising to launch legal action against the ruling.

But those in favor of the ruling said it will spur innovation and economic activity. During the FCC’s discussions, Commissioner Brendan Carr said that the proposal would cut $2 billion in regulations and stimulate $2.4 billion in new small cell deployment.

That would mean 1.8 million more homes and businesses would be covered, 97% of which in rural and suburban areas, although opponents dispute that.

And while some cities and governmental organizations have threatened legal action over the FCC’s decision, saying it may violate the Telecommunications Act and the 10th Amendment of the U.S. Constitution, Kudlow rejected those claims. While he said that the ruling is not meant to trample on the sovereignty of cities and states, it instead prevents onerous fees and regulations from slowing deployment.

“We all believe in the 10th Amendment, but sometimes you have to override, and by the way the 1996 bill permits that kind of override,” Kudlow said. “We’re not here to be completely heavy-handed, but sometimes you’ve got to do what you’ve got to do in some of these states and cities that don’t want to cooperate and want to shake us down. We can’t allow obstacles and barriers to stop this movement.”

Rep. Greg Walden, R-OR, chair of the House Energy & Commerce Committee, said the FCC’s ruling was the right one. Earlier this year, the House passed legislation to identify spectrum available for development and use of 5G, and cut the associated paperwork. In a speech at the White House summit, Walden said government must do all it can to encourage innovation and investment.

“What it really comes down to is pushing aside the obstacles the make broadband deployment difficult and clearing the way for innovation,” he said. “Industry is not asking the government for money to build 5G networks, they’re asking us to cut the red tape that surrounds infrastructure deployment.”